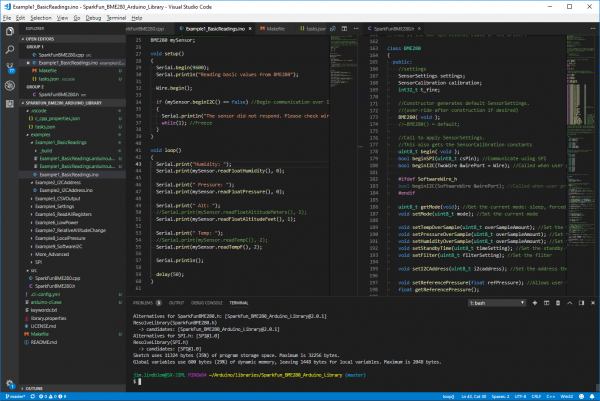 VS Code used to edit an Arduino sketch file while viewing a library's .h file

The Arduino IDE lacks a number of "professional" code-assistance features, like:

Once you take the time to learn these tools they make programming in C/C++ (or any language, really) so much more efficient. They help produce better code faster.

We'll focus on using Microsoft's free, open-source VS Code editor in this tutorial, but a lot of the concepts should translate to other IDE's like Eclipse, Netbeans, or anything else you may prefer. We're not shilling for VS Code in this tutorial but it may be hard, at times, to hide our admiration for the well-done editing tool.

Also critical to this tutorial is Arduino's recently (pre-)released Arduino CLI. The Arduino CLI provides a command-line interface for such tasks as:

Arduino CLI is the "glue" we'll use to pair the VS Code IDE with common Arduino compilation and upload tools. Arduino CLI provides us a command line interface that can be passed to tools like make or a shell via the IDE.

This tutorial will demonstrate how to use a VS Code to build for and program an Arduino -- all without ever opening the comfortable-yet-restricting Arduino IDE. We'll try to step through, as much as possible, how the VS Code/Arduino CLI pair can be used to develop an Arduino library, but a lot of what we'll cover can be adapted to new Arduino core development or even simple Arduino sketch-writing.

This is a relatively advanced tutorial. If you're not familiar with using a terminal or invoking command-line tools like make, we'd recommend learning a bit about those first. There are tons of great resources that can help familiarize you with these tools. A few in particular we'd recommend are:

You'll also need Arduino installed on your machine. Visit arduino.cc to download the latest version locally to your machine.

We'd also recommend you set up your Arduino sketchbook location and install all libraries and board definitions you'd like to use using the Arduino IDE. (These are features that still seem to mostly be in their infancy as Arduino CLI continues its development.)