Inside the light sculpture enclosure is one NeoPixel NeoMatrix 8x8 - 64 RGB LED containing a total of 64 addressable WS2812 LEDs, a 100uF Capacitor to protect the first LED, one Qduino Mini - Arduino Dev Board to act as the brains of the project, a Mini Power Switch to easily turn the project on or off, a Tactile Button to navigate between light modes, and a Potentiometer to control brightness. A small piece of Snappable Protoboard is used to extend the '+' and '-' terminals on the Qduino Mini making it easier to connect the '+' and '-' leads from your components. A MicroB USB cable is used to supply wall power directly to the USB port on the Qduino, but a large LiPo battery would work as well.

As shown in the circuit diagram below, the Qduino Mini is the brains of this project. Pin D6 is connected to the NeoPixel NeoMatrix, the potentiometer is connect to pin A0, the switch to pin D4, and the momentary pushbutton to D5. The first LED on the NeoPixel Matrix is protected using a 100uF capacitor between '+' and '-' on the matrix and '+' and '-' on the Qduino Mini. You may also notice that while the rest of the components directly connect to '+' on the Qduini Mini, the switch and button both connect to '-' of the Qduino via a resistor. This is called a pulldown resistor and allows the Qduino to get accurate readings of HIGH and LOW. To learn more about how to use pull up and pull down resistors with Arduino, check out our tutorial. 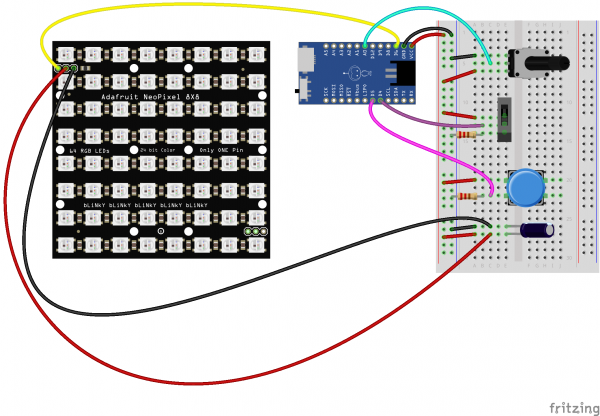