The SparkFun Thing Plus - DA16200's pin layout has a feather form factor. The board dimensions are illustrated in the drawing below. 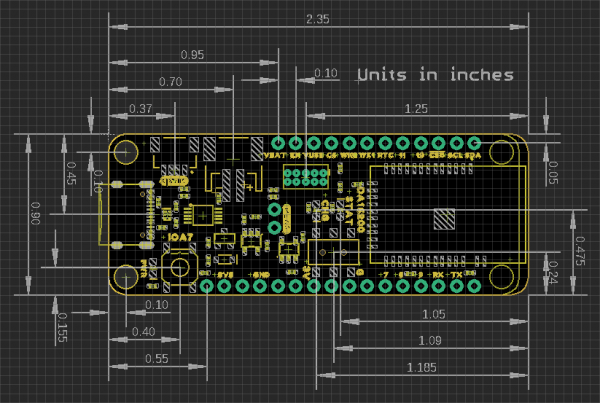 Board dimensions (PDF) for the DA16200 Thing Plus, in inches. (Click to enlarge)

The USB connector is provided to power and interact with the board. For most users, it will be the primary programing interface for the DA16200 module.

USB-C connector on the DA16200 Thing Plus. (Click to enlarge)

The CH340 allows the DA16200MOD to communicate with a computer/host device through the board's USB-C connection. This allows the board to show up as a device on the serial (or COM) port of the computer. Users will need to install the latest drivers for the computer to recognize the board (see Software Overview section).

The power pins that are available on the board, are detailed below: Below, is a general summary of the power circuitry on the board:

For more details, users can reference the schematic and the datasheets of the individual components in the power circuitry.

The charging circuit utilizes the MCP73831 linear charge management controller and is powered directly from the USB-C connector or VUSB. The controller is configured for a 500mA charge rate and active charging is indicated by the yellow, CHG LED. If the charge controller is shutdown or charging is complete, the CHG LED will turn off. For more information, please refer to the MCP73831 datasheet and the Indicator LEDs section below.

The power source to the XC6222 is controlled by a P-channel MOSFET. In addition, the 3.3V regulated output from the XC6222 is controlled by the enable (EN) pin, broken out on the board. By default, the chip enable pin (EN) is pulled high, to enable the 3.3V output, supply voltage. To disable and shutdown the output voltage from the XC6222, the chip enable pin (EN) needs to be pulled low (i.e. shorted to ground (GND)). For more information, pleas refer to the XC6222.

The DA16200MOD is an ultra low power WiFi module manufactured by Dialog (a subsidiary of Renesas). It contains a 802.11b/g/n radio (PHY), a baseband processor, a media access controller (MAC), on-chip memory, and a host networking application processor, all on a single silicon die. The system on a chip (SoC) has full offload capabilities to run the entire networking OS and TCP/IP stack on chip; therefore, an external network processor, CPU, or microcontroller are not required. The DA16200 is ideal for your next IoT project, thanks to the multiple sleep modes that allow you to take advantage of current draws as low as 0.2 - 3.5 µA.

The module is Wi-Fi Alliance certified for IEEE802.11b/g/n, Wi-Fi Direct, WPS functionalities and it has been approved by many countries including the United States (FCC), Canada (IC) and China (SRRC). Using the Wi-Fi Alliance transfer policy, the Wi-Fi Certifications can be transferred without being tested again.

The DA16200 Thing Plus includes JTAG PTH pins for a JTAG header, to be used with debugging probe. The JTAG pins breakout the SWD (software debug) pins to the DA16200MOD module.

RTC swirtch on the DA16200 Thing Plus. (Click to enlarge)

There are three indication LEDs on the DA16200 Thing Plus for:

The battery charging (CHG) LED indicator on the DA16200 Thing Plus. (Click to enlarge)

The blue, STAT LED is typically used as a test or status LED to make sure that a board is working or for basic debugging. This indicator is connected to GPIO A11.

The status LED indicator for GPIO A11 on the DA16200 Thing Plus. (Click to enlarge)

The RESET button is connected to the GPIO A7 and is used to factory reset the module; press and hold the button for more than 5 seconds to initialize nvram data.

RESET button on the DA16200 Thing Plus. (Click to enlarge)

The I2C bus for this board utilizes the GPIO connections, detailed in the table below:

I2C bus components on the DA16200 Thing Plus. (Click to enlarge)

A Qwiic connector is provided for users to seamlessly integrate with SparkFun's Qwiic Ecosystem.

Qwiic connector on the DA16200 Thing Plus. (Click to enlarge)

The Qwiic system is intended a quick, hassle-free cabling/connector system for I2C devices. Qwiic is actually a play on words between "quick" and I2C or "iic".

Features of the Qwiic System

Keep your soldering iron at bay.

Cables plug easily between boards making quick work of setting up a new prototype. We currently offer three different lengths of Qwiic cables as well as a breadboard friendly cable to connect any Qwiic enabled board to anything else. Initially you may need to solder headers onto the shield to connect your platform to the Qwiic system but once that’s done it’s plug and go! 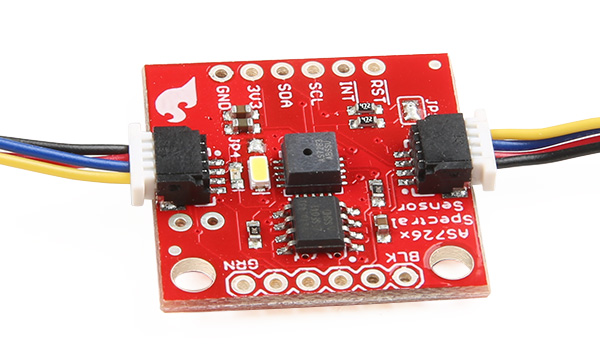 How many times have you swapped the SDA and SCL wires on your breadboard hoping the sensor will start working? The Qwiic connector is polarized so you know you’ll have it wired correctly, every time, from the start. 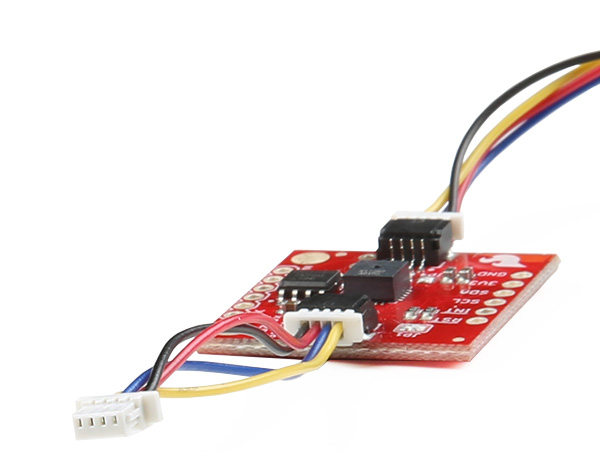 It’s time to leverage the power of the I2C bus! Most Qwiic boards will have two or more connectors on them allowing multiple devices to be connected.

There are six jumpers on the DA16200 Thing Plus.

Users who have never worked with soldering jumpers and cutting PCB traces before (or for a quick refresher), check out our How to Work with Solder Jumpers and PCB Traces tutorial for detailed instructions and tips.

There are four adjustable solder jumpers on the mikroBUS™ carrier board labeled MEAS, BYP, 3.3V_VE and 3.3V. The table below briefly outlines their functionalities:

Note: When modifying these jumpers, be careful to avoid cutting nearby traces. Although not usually an issue, we thought to mention that this board is also a 4-layer PCB, so be careful not to cut the jumper too deep. 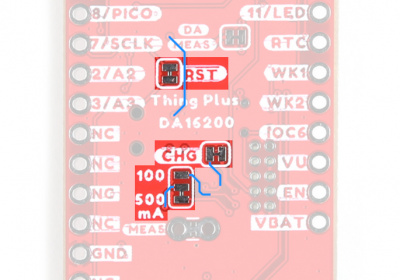