Before we get much further, let's discuss the two forms electricity can take: static or current. In working with electronics, current electricity will be much more common, but static electricity is important to understand as well. 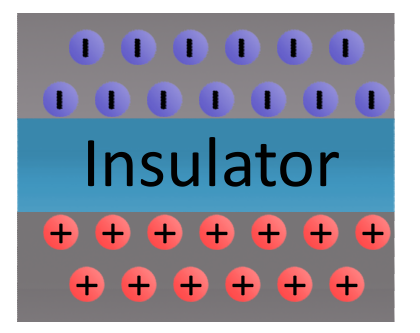 When the charges do find a means of equalizing, a static discharge occurs. The attraction of the charges becomes so great that they can flow through even the best of insulators (air, glass, plastic, rubber, etc.). Static discharges can be harmful depending on what medium the charges travel through and to what surfaces the charges are transferring. Charges equalizing through an air gap can result in a visible shock as the traveling electrons collide with electrons in the air, which become excited and release energy in the form of light.

Spark gap igniters are used to create a controlled static discharge. Opposite charges build up on each of the conductors until their attraction is so great charges can flow through the air.

One of the most dramatic examples of static discharge is lightning. When a cloud system gathers enough charge relative to either another group of clouds or the earth's ground, the charges will try to equalize. As the cloud discharges, massive quantities of positive (or sometimes negative) charges run through the air from ground to cloud causing the visible effect we're all familiar with.

Static electricity also familiarly exists when we rub balloons on our head to make our hair stand up, or when we shuffle on the floor with fuzzy slippers and shock the family cat (accidentally, of course). In each case, friction from rubbing different types of materials transfers electrons. The object losing electrons becomes positively charged, while the object gaining electrons becomes negatively charged. The two objects become attracted to each other until they can find a way to equalize.

Working with electronics, we generally don't have to deal with static electricity. When we do, we're usually trying to protect our sensitive electronic components from being subjected to a static discharge. Preventative measures against static electricity include wearing ESD (electrostatic discharge) wrist straps, or adding special components in circuits to protect against very high spikes of charge.

In order to flow, current electricity requires a circuit: a closed, never-ending loop of conductive material. A circuit could be as simple as a conductive wire connected end-to-end, but useful circuits usually contain a mix of wire and other components which control the flow of electricity. The only rule when it comes to making circuits is they can't have any insulating gaps in them.

If you have a wire full of copper atoms and want to induce a flow of electrons through it, all free electrons need somewhere to flow in the same general direction. Copper is a great conductor, perfect for making charges flow. If a circuit of copper wire is broken, the charges can't flow through the air, which will also prevent any of the charges toward the middle from going anywhere.

On the other hand, if the wire were connected end-to-end, the electrons all have a neighboring atom and can all flow in the same general direction.

We now understand how electrons can flow, but how do we get them flowing in the first place? Then, once the electrons are flowing, how do they produce the energy required to illuminate light bulbs or spin motors? For that, we need to understand electric fields.