First we will review the ingredients we need to make electricity:

Batteries are common energy sources which convert chemical energy to electrical energy. They have two terminals, which connect to the rest of the circuit. On one terminal there are an excess of negative charges, while all of the positive charges coalesce on the other. This is an electric potential difference just waiting to act!

If we connected our wire full of conductive copper atoms to the battery, that electric field will influence the negatively-charged free electrons in the copper atoms. Simultaneously pushed by the negative terminal and pulled by the positive terminal, the electrons in the copper will move from atom to atom creating the flow of charge we know as electricity. 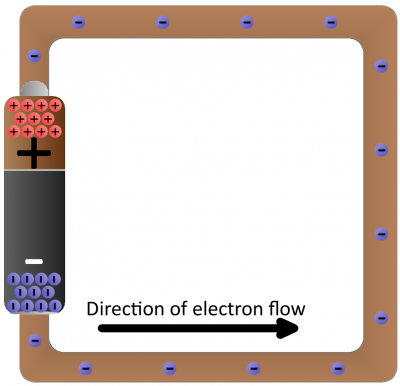 After a second of the current flow, the electrons have actually moved very little--fractions of a centimeter. However, the energy produced by the current flow is huge, especially since there's nothing in this circuit to slow down the flow or consume the energy. Connecting a pure conductor directly across an energy source is a bad idea. Energy moves very quickly through the system and is transformed into heat in the wire, which may quickly turn into melting wire or fire.

Instead of wasting all that energy, not to mention destroying the battery and wire, let's build a circuit that does something useful! Generally an electric circuit will transfer electric energy into some other form--light, heat, motion, etc. If we connect a light bulb to the battery with wires in between, we have a simple, functional circuit.

Schematic: A battery (left) connecting to a lightbulb (right), the circuit is completed when the switch (top) closes. With the circuit closed, electrons can flow, pushed from the negative terminal of the battery through the lightbulb, to the positive terminal.