When we harness electricity to power our circuits, gizmos, and gadgets, we're really transforming energy. Electronic circuits must be able to store energy and transfer it to other forms like heat, light, or motion. The stored energy of a circuit is called electric potential energy.

To understand potential energy we need to understand energy in general. Energy is defined as the ability of an object to do work on another object, which means moving that object some distance. Energy comes in many forms, some we can see (like mechanical) and others we can't (like chemical or electrical). Regardless of what form it's in, energy exists in one of two states: kinetic or potential. 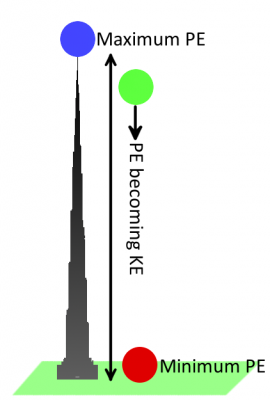 Let's go back to using gravity as an example. A bowling ball sitting motionless at the top of Khalifa tower has a lot of potential (stored) energy. Once dropped, the ball--pulled by the gravitational field--accelerates towards the ground. As the ball accelerates, potential energy is converted into kinetic energy (the energy from motion). Eventually all of the ball's energy is converted from potential to kinetic, and then passed on to whatever it hits. When the ball is on the ground, it has a very low potential energy.

One of the most common terms we discuss in evaluating electricity is voltage. A voltage is the difference in potential between two points in an electric field. Voltage gives us an idea of just how much pushing force an electric field has.

With potential and potential energy under our belt we have all of the ingredients necessary to make current electricity. Let's do it!