As we mentioned at the beginning of this tutorial, electricity is defined as the flow of electric charge. Charge is a property of matter--just like mass, volume, or density. It is measurable. Just as you can quantify how much mass something has, you can measure how much charge it has. The key concept with charge is that it can come in two types: positive (+) or negative (-).

In order to move charge we need charge carriers, and that's where our knowledge of atomic particles--specifically electrons and protons--comes in handy. Electrons always carry a negative charge, while protons are always positively charged. Neutrons (true to their name) are neutral, they have no charge. Both electrons and protons carry the same amount of charge, just a different type. 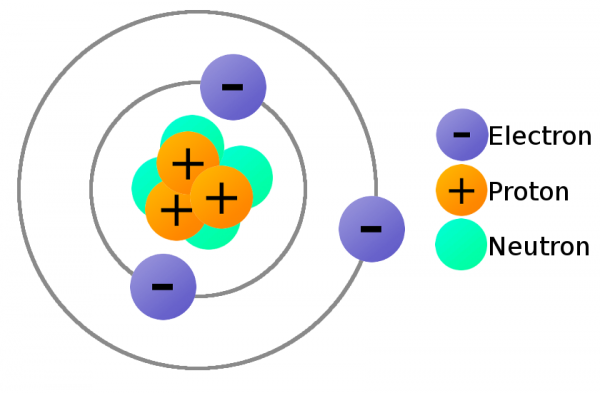 A lithium atom (3 protons) model with the charges labeled.

The charge of electrons and protons is important, because it provides us the means to exert a force on them. Electrostatic force!

Electrostatic force (also called Coulomb's law) is a force that operates between charges. It states that charges of the same type repel each other, while charges of opposite types are attracted together. Opposites attract, and likes repel. 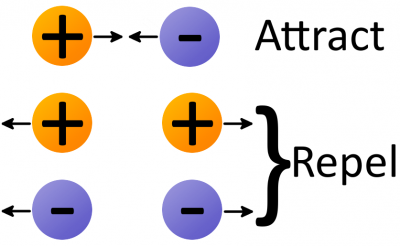 The amount of force acting on two charges depends on how far they are from each other. The closer two charges get, the greater the force (either pushing together, or pulling away) becomes.

Thanks to electrostatic force, electrons will push away other electrons and be attracted to protons. This force is part of the "glue" that holds atoms together, but it's also the tool we need to make electrons (and charges) flow!

We now have all the tools to make charges flow. Electrons in atoms can act as our charge carrier, because every electron carries a negative charge. If we can free an electron from an atom and force it to move, we can create electricity.

Consider the atomic model of a copper atom, one of the preferred elemental sources for charge flow. In its balanced state, copper has 29 protons in its nucleus and an equal number of electrons orbiting around it. Electrons orbit at varying distances from the nucleus of the atom. Electrons closer to the nucleus feel a much stronger attraction to the center than those in distant orbits. The outermost electrons of an atom are called the valence electrons, these require the least amount of force to be freed from an atom. 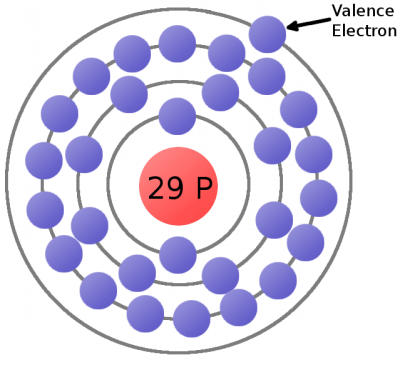 This is a copper atom diagram: 29 protons in the nucleus, surrounded by bands of circling electrons. Electrons closer to the nucleus are hard to remove while the valence (outer ring) electron requires relatively little energy to be ejected from the atom.

Using enough electrostatic force on the valence electron--either pushing it with another negative charge or attracting it with a positive charge--we can eject the electron from orbit around the atom creating a free electron.

Now consider a copper wire: matter filled with countless copper atoms. As our free electron is floating in a space between atoms, it's pulled and prodded by surrounding charges in that space. In this chaos the free electron eventually finds a new atom to latch on to; in doing so, the negative charge of that electron ejects another valence electron from the atom. Now a new electron is drifting through free space looking to do the same thing. This chain effect can continue on and on to create a flow of electrons called electric current.

A very simplified model of charges flowing through atoms to make current.

Some elemental types of atoms are better than others at releasing their electrons. To get the best possible electron flow we want to use atoms which don't hold very tightly to their valence electrons. An element's conductivity measures how tightly bound an electron is to an atom.

Elements with high conductivity, which have very mobile electrons, are called conductors. These are the types of materials we want to use to make wires and other components which aid in electron flow. Metals like copper, silver, and gold are usually our top choices for good conductors.