We have a handle on how electrons flow through matter to create electricity. That's all there is to electricity. Well, almost all. Now we need a source to induce the flow of electrons. Most often that source of electron flow will come from an electric field.

A field is a tool we use to model physical interactions which don't involve any observable contact. Fields can't be seen as they don't have a physical appearance, but the effect they have is very real. 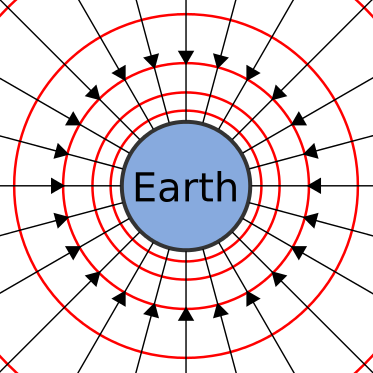 The strength or intensity of fields isn't uniform at all points in the field. The further you are from the source of the field the less effect the field has. The magnitude of Earth's gravitational field decreases as you get further away from the center of the planet.

Electric fields (e-fields) are an important tool in understanding how electricity begins and continues to flow. Electric fields describe the pulling or pushing force in a space between charges. Compared to Earth's gravitational field, electric fields have one major difference: while Earth's field generally only attracts other objects of mass (since everything is so significantly less massive), electric fields push charges away just as often as they attract them.

Groups of electric charges can be combined to make more complete electric fields. 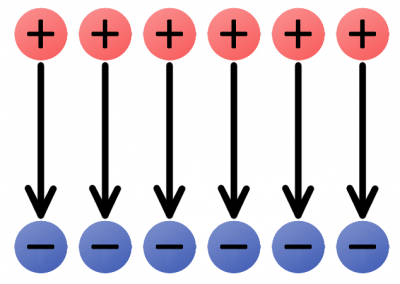 The uniform e-field above points away from the positive charges, towards the negatives. Imagine a tiny positive test charge dropped in the e-field; it should follow the direction of the arrows. As we've seen, electricity usually involves the flow of electrons--negative charges--which flow against electric fields.

Electric fields provide us with the pushing force we need to induce current flow. An electric field in a circuit is like an electron pump: a large source of negative charges that can propel electrons, which will flow through the circuit towards the positive lump of charges.