In this section we'll cover the unique aspects of the KX134 and KX132 accelerometers along with other components found on the Triple Axis Accelerometer Breakout - KX13x (Qwiic).

First up let's examine the two accelerometers on the boards, highlight their specifications and how they differ. The KX134-1211 and KX132-1211 offer the following features: 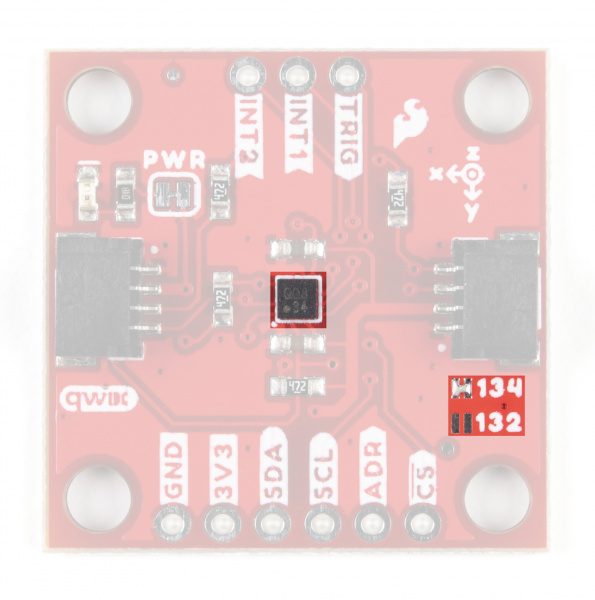 Note: As these boards both share the same PCB design, a closed solder jumper located below the "right" side Qwiic connector indicates the version (KX132 or KX134). The photo above highlights this solder jumper.

The KX13x also includes an integrated voltage regulator to maintain consistent performance across its entire supply voltage range (1.7 to 3.6V). The table below outlines some of the electrical and functional characteristics of the KX134-1211 and KX132-1211 from the sensors' datasheets. All values in the table apply to both accelerometers unless specifically noted in the table or notes below it. Refer to the accelerometers' datasheets for a full overview: KX132-1211 & KX134-1211.

The KX13x Breakouts' I2C and SPI interface share the same pins so users must select the interface mode by altering the state of the ADR/SDO pin. The ADR jumper sets the state of the ADR/SDO pin (more on that in the Solder Jumpers section). Both breakouts operate in I2C mode by default. We've labeled these shared pins so I2C labels are visible from the front and SPI labels are visible when viewed from the back.

As you would expect on a Qwiic breakout, the boards break out the KX134's I2C pins to a pair of Qwiic connectors to easily integrate the board into a Qwiic system. The I2C pins are also routed to a standard 0.1" spaced header for PTH soldering. 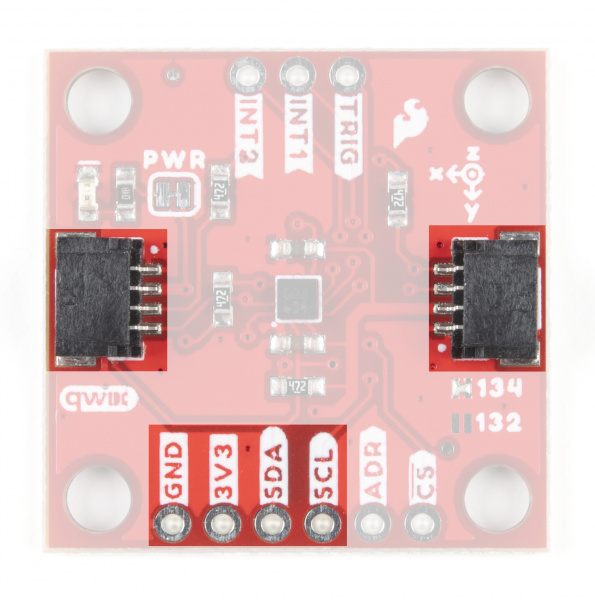 Note: The Qwiic interface is great for general use cases on the lower acceleration ranges and for testing the higher acceleration settings but we recommended to solder the connections for long-term and high-acceleration projects to avoid communication issues.

Communicating via SPI on the Qwiic KX13x is ideal for taking advantage of the maximum Output Data Rate as the Digital SPI interface on the KX13x-1211 can operate at speeds up to 10MHz.

The Qwiic KX13x breaks out the SPI interface to the same standard 0.1" spaced header as the I2C pins. As mentioned above, the board ships with the I2C interface enabled by default so to switch to the SPI interface users need to open the ADR jumper by severing the trace in between the "Center" and "Left" pads. 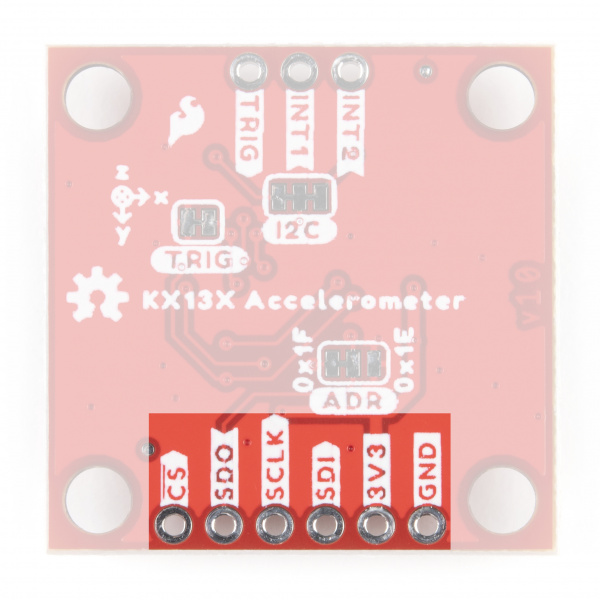 The KX13x has two physical interrupt pins as well as a trigger pin for FIFO buffer control. Both of the physical interrupts operate as push-pull, enter a high-impedence (high-Z) state during the Power-On-Reset (POR) procedure and are driven LOW after POR. Connect these pins to external interrupt-capable pins on your microcontroller to use the interrupt functionalities. Refer to the Interrupt and Buffer examples in the Qwiic KX13x Arduino and Python libraries for a demonstration of using the interrupt pins.

The Trigger pin controls the FIFO buffer. By default, the Qwiic KX13x ties this pin to ground through the TRIG jumper. Users who wish to use the Trigger pin must open that jumper before tying it to a pin on their microcontroller. Refer to the Datasheets (KX132 & KX134) and either Technical Reference Manuals (KX132 or KX134) for more information on using this pin to control the FIFO buffer.

The Qwiic KX13x has four jumpers labeled ADR, I2C, TRIG and PWR. In this section we'll cover each jumper's purpose, their default states and how to configure them to alter the functionality of the KX13x Breakouts.

Finally, to set the Qwiic KX13x to SPI mode, sever the trace between the "Center" and "Left" pads of the ADR jumper (default setting) to leave the ADR/SDO pin Floating/No Connect. After adjusting the jumper, connect the SDO pin to your controller's SDI/COPI pin.

The I2C jumper on the Qwiic KX13x pulls the SDA and SCL lines to 3.3V via a pair of 4.7kΩ resistors. The default state of this jumper is CLOSED. Open the jumper by severing the traces between the three pads to disable the pullups on these lines.

If you have more than one device on a single I2C bus, best practices recommend to only maintain a single pair of pullup resistors to avoid creating too strong of a parallel resistance. A strong parallel resistance can lead to communication issues on the bus. Take note that if you are using a single set of pull-up resistors on your I2C bus, make sure all devices operate at the same logic level or are properly shifted to avoid damage to the device(s).

The Trigger jumper ties the TRIG pin on the KX13x-1211 to 0V/Ground. The default state of this jumper is CLOSED. To use the Trigger pin for FIFO control, open the jumper and connect the TRIG PTH pin to a digital I/O pin on your microcontroller. Refer to section 2.5 in the Technical Reference Manuals (KX132 or KX134) for more information on using Trigger Mode.

The Power LED jumper (labeled PWR on the board) completes the power LED circuit on the board by tying the anode of the LED to 3.3V via a 1kΩ resistor. The jumper is CLOSED by default. Disable the power LED by severing the trace between the two pads. Disabling the LED helps reduce the total current draw of the board and is particularly helpful for low-power or battery-powered applications.