In the previous circuit, you got to use a potentiometer, which varies resistance based on the twisting of a knob. In this circuit you’ll be using a photoresistor, which changes resistance based on how much light the sensor receives. This circuit creates a simple night-light using the photoresistor that turns on when the room gets dark and turns off when it is bright. 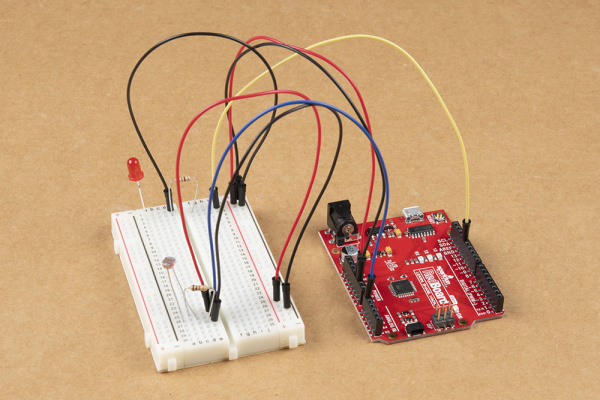 Gather the following parts required for this circuit:

Photoresistors, or photocells, are light-sensitive, variable resistors. As more light shines on the sensor’s head, the resistance between its two terminals decreases and vice versa. They’re an easy-to-use component in projects that require ambient-light sensing.

We covered the difference between analog and digital signals in the last experiment but you may be wondering how a digital thing like the RedBoard Qwiic can interpret analog signals. The answer to that is an Analog to Digital Converter (or ADC). The six analog inputs (A0--A5) we highlighted in the last circuit all use an ADC. These pins "sample" the analog signal and create a digital signal for the microcontroller to interpret. The "resolution" of this signal is based on the resolution of the ADC. In the case of the RedBoard, that resolution is 10-bit. With a 10-bit ADC, we get 2 ^ 10 = 1024 possible values, which is why the analog signal varies between 0 and 1023.

Since the RedBoard can’t directly interpret resistance (rather, it reads voltage), we need to use a voltage divider to use our photoresistor, a part that doesn't output voltage. The resistance of the photoresistor changes as it gets darker or lighter which changes the amount of voltage that is read on the analog pin and "divides" the voltage, 5V in this case. That divided voltage is then read on the analog to digital converter.

If R1 is a constant value (the resistor) and R2 fluctuates (the photoresistor), the amount of voltage measured on the Vout pin changes.

The photoresistor is not polarized. It can be inserted in either direction. 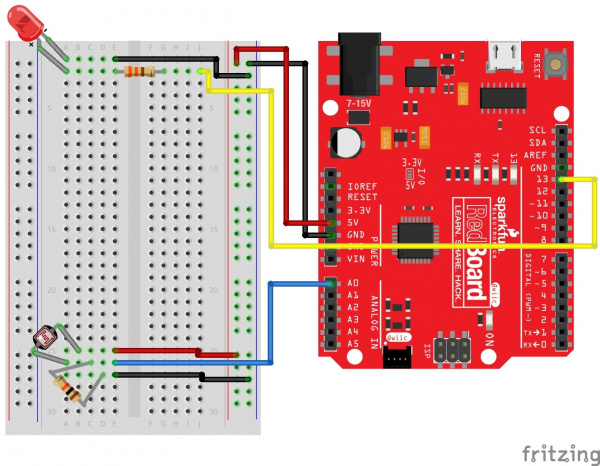 Open the example code from your Arduino sketchbook or copy and paste the following code into the Arduino IDE. Hit upload, and see what happens! 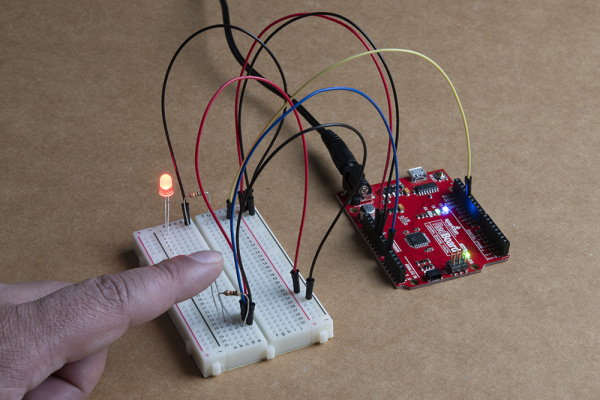