Hardware: The System and Power Supply 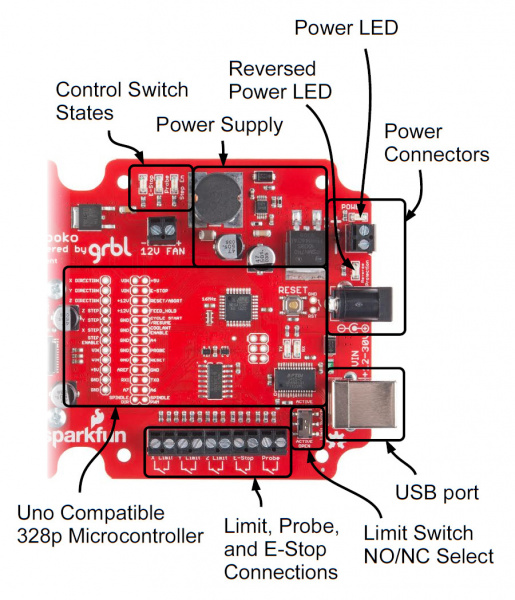 Stepper motors take a lot more current than most hobby circuits. The Stepoko can supply up to 2.0A each per coil! To get that kind of power, an ordinary wall adapter won't suffice. Apply 12-30 VDC to either the barrel jack or screw terminals, but not both. Use either a power brick or a Benchtop Supply of some kind. Make sure the supply can generate about 3 times the single-coil current for a 3-axis setup. Because of the switching nature of the stepper motors, the maximum current for a single winding is greater than the total current required to run that motor.

Use the following formula:

For instance, if two channels are used and set to 1A each, a 2A supply is required.

After power is attached, the blue power LED should light illuminate. If it doesn't, or if the reverse protection LED lights up, remove power and check voltage/polarity of the supply.

Note: When a USB connection is made, the power LED will light up even though there is not enough current to drive the motors.

The Stepoko is actually an Uno compatible ATmega328p! It's just an Arduino with a grbl shield attached. This is evident by looking near the USB port where the familiar FTDI, Atmel IC, reset button, and even the SPI 2x3 header can be found. In this area, we've even broken out all of the pins that are associated with the microcontroller and power supplies. If you peek at the back of the board, there's a chart in silkscreen that matches the grbl pin functions to the Arduino pin naming convention. It's open source! You can do what you want to it.

To use the microcontroller, attach a USB cable and let your computer enumerate the device as it would with an Arduino. After that, you could program it with the Arduino IDE. It comes with grbl 0.9 though, so don't program it unless you absolutely have to. Even if you revert back to grbl, the grbl settings will be lost and you'll have to program them all in again.

On the left, the red light indicates that the E-Stop has been pressed (or the switch terminals are open). In this mode, the steppers are not being driven and can be manually moved. On the right, the green light indicates that E-Stop has been deactivated. Power is enabled to the stepper motors and that their rotors are magnetically locked. In this mode, the system has control of the movement.
Share
Use this URL to share: