Before powering up the Stepoko, set the desired current for each attached motor. The current control potentiometer scales the peak drive current from 0 to 2 amperes. There a few methods of setting the current.

This is the preferred method.

The trimpot can swing through 200 degrees of motion, and covers a range of 2 amps. Turn the trimpot counter-clockwise gently until it hits the stop, then clockwise a number of degrees for the desired current. The example datasheet from the previous section lists the motor as being 0.33 A capable. Set the knob to 33 degrees from counter-clockwise stop.

Use this formula for other motors:

If you have more experience, you may opt to set the current by feel.

Start by setting all the trimpots to slightly off their counter-clockwise stop. Then, fire up the Universal Gcode Sender software (described later) and connect to the Stepoko. This enables all the motor drivers and will lock their position. Now, attempt to move the motor. If the motor moves easily, carefully turn up the channels and repeat the test until the force required to move the motor (slipping poles) is greater than the expected lateral force exerted by the tool head.

Caution! This can result in setting the current higher than the rating on the motor. Even though a motor may be rated at one level, it is absolutely possible to drive it at a higher level. If you need torque, or locking torque, that results in current above the motor's rating, you should be using a bigger motor. The result will be heat so keep checking that the motors are not too hot to touch (without burning yourself). Do this every couple minutes for about a half-hour until you are convinced that the temperature is stable.

The most scientific method to know a thing is to measure it. To do that, you'll need a scope and a steady hand.

There are 6 current sense resistors on the Stepoko that can be identified in the schematic, and by finding the larger resistors near the drivers. Each has one end grounded while the other is connected to the active driving circuitry. By adding a probe ground to one end and stabbing the other end, both positive and negative coil current can be measured. 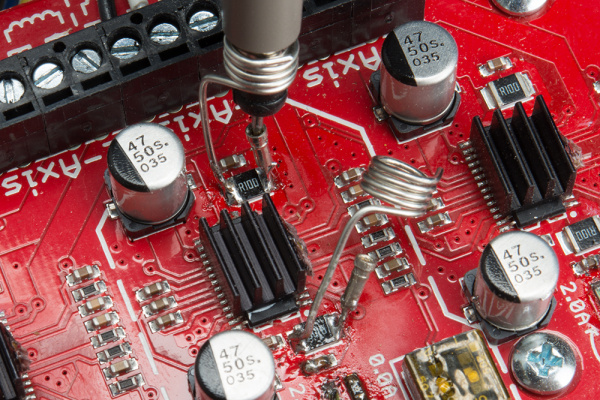 Here an oscilloscope probe has the grabber and alligator clip removed, and is inserted in a coil that contacts the ground part of the probe while the tip fits down into a pin cup that attaches to either end of the current sense resistor. Sometimes this setup is called a 'Zero Length Probe'.

The resistor itself is 0.1 ohms in resistance. At the max current setting of 2A, and by following ohm's law, the max voltage read across this resistor is 0.2V, or 200 millivolts. This is quite low. A scope with 8 divisons on the screen has to be set to 50mV per divison so that positive and negative 2A can be read. At this vertical scale, the electromagnetic radiation from the giant current loads of the motor will be picked up by the extra few inches of the probe, which is why a the shortest possible loop of wire at the probe end is desired. 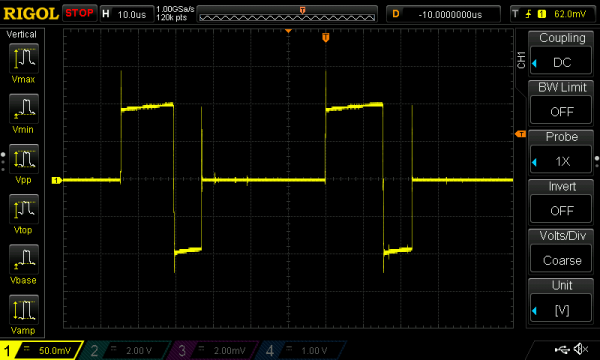 This plot shows the positive and negative cycles of the motor's coil. Notice that the plateau is at 100mV, or one ampere. The trimpot is centered.

Adjust the plateau average to the rating of the motor.