The Stepoko is designed to be able to control a multitude of 2-phase stepper motors. These all have two sets of coils that are driven in a particular combination in order to make the motor turn in the correct direction. If this is all new to you, read our tutorial on Motors and Selecting the Right One, in particular the section Stepper Motors. This tutorial has some descriptions of motors with three sets of coils rather than two, but the theory is the same. 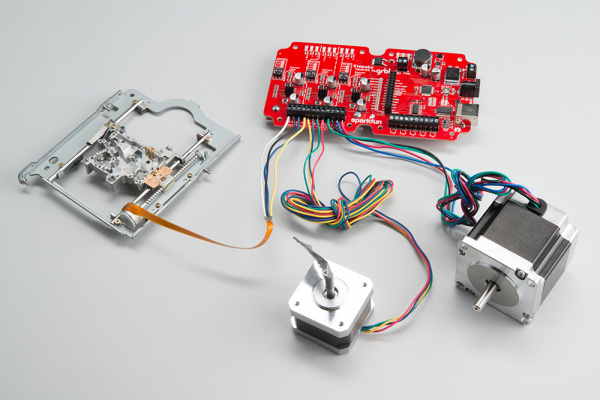 The Stepoko can handle a variety of motors by adjusting the current level for the application.

A lot of the time steppers come from a 'motor box' on a hobbyist's shelf, and may not have ratings or part numbers. If there are four wires, chances are it's a stepper. The coils need to be identified though, so take out a multimeter and look for continuity between wires. If the motor has four wires, with two pairs that have a similar resistance, you've found the coils!

Here you can see that the first two random wires measured open, and the second two measured 1.8 ohms. This is a typical large-ish 2 phase stepper.

Alternately, with the datasheet the wires should be indicated. An example datasheet from our general purpose motor shows a simple wiring diagram with the two coils.

The two coils of the motor correspond with the 'A' and 'B' terminal pairs on the board. Including the fact that you can put the coils in backwards, there are 8 possible ways to connect two coils! But which one goes where? Don't even worry about it. If one is backwards, or if coils 'A' and 'B' are swapped, the motor will just spin in the other direction, which can be set in software.

More worrisome is how to convince the stranded wires get into the terminal blocks and then, stay there after they have been tightened. Tinning the leads can make the whole thing go smoothly.

Left: the wire ends look pretty ratty from the factory. Center: Collect the wire strands by giving them about 180 degrees of twist along the length of the strip. Right: Tin each lead. Apply excess solder to allow the flux to work, and pull the extra solder off with the iron yielding a solid cylinder of wire.

Sometimes the terminal springs are tight from the factory. To help ease connection, back out the termina screw until it's flush with the terminal block, gently open the contact, and use a tool to push from the tinned end.

Left: Back the screw out until flush. Center: Gently open the contact plate. Right: Help put the wire in with a tool that is choked up near the tinned end. You can't push a rope!