There's one last line you should be aware of, called SS for Slave Select. This tells the slave that it should wake up and receive / send data and is also used when multiple slaves are present to select the one you'd like to talk to. 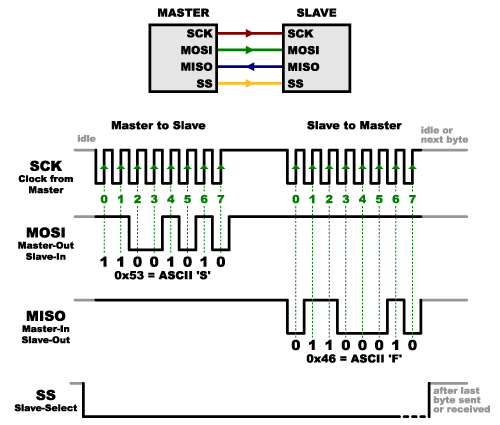 The SS line is normally held high, which disconnects the slave from the SPI bus. (This type of logic is known as “active low,” and you’ll often see used it for enable and reset lines.) Just before data is sent to the slave, the line is brought low, which activates the slave. When you're done using the slave, the line is made high again. In a shift register, this corresponds to the "latch" input, which transfers the received data to the output lines.

There are two ways of connecting multiple slaves to an SPI bus: 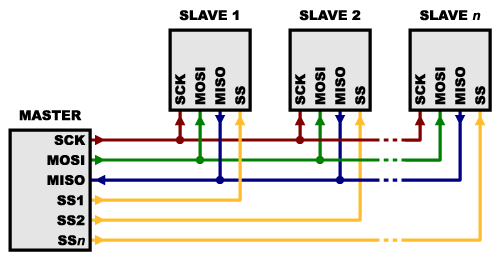 Note that, for this layout, data overflows from one slave to the next, so to send data to any one slave, you'll need to transmit enough data to reach all of them. Also, keep in mind that the first piece of data you transmit will end up in the last slave.

This type of layout is typically used in output-only situations, such as driving LEDs where you don't need to receive any data back. In these cases you can leave the master's MISO line disconnected. However, if data does need to be returned to the master, you can do this by closing the daisy-chain loop (blue wire in the above diagram). Note that if you do this, the return data from slave 1 will need to pass through all the slaves before getting back to the master, so be sure to send enough receive commands to get the data you need.