To power the SAMD21 Breakout board, just plug it into a USB port on your computer. The red power LED indicator should immediately turn on, followed shortly-thereafter by a blinking blue LED on pin 13.

You can set the SAMD21 Boards up -- and start programming them -- without connecting anything besides a USB cable, but you're not going to get far without soldering something to them. That something can be headers (male, female, right-angle or more) or just plain-old wire.

If you're using a Mini Breakout, a pair of 12-pin male headers work well to keep the board breadboard-friendly. A 2-pin female header can be soldered to the inner I2C pins -- though you may have to trim the bottom side of the shroud to avoid the ATSAMD21's pins. 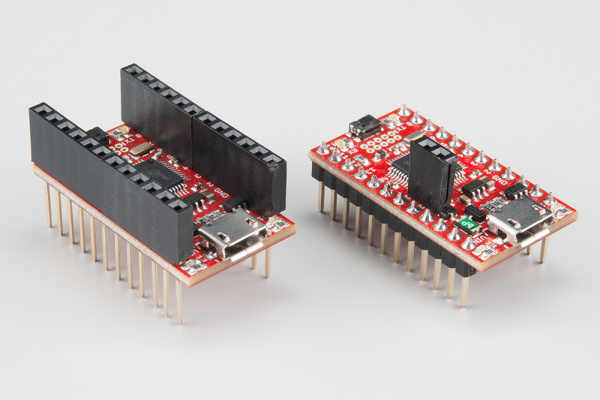 SAMD21 Mini Breakouts assembled with male headers and 6-pin stackable headers. Female headers have to be trimmed a bit to avoid components.

Two pairs of 6-pin stackable headers can also maintain breadboard-compatibility while allowing your to jumper straight out of the board. To use these headers, you'll have to shave a bit of the bottom edge of the shroud to avoid bumping up against the outer LEDs. 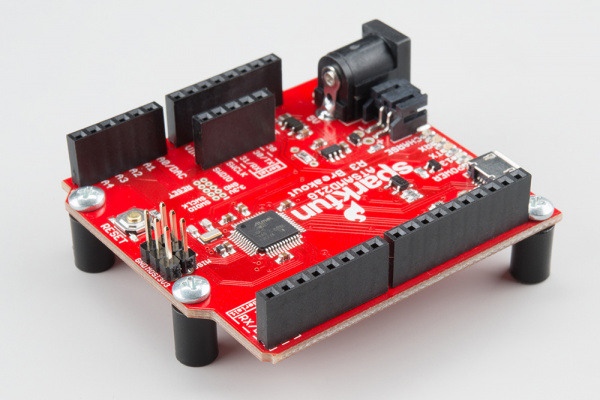