The RFM69HCW transmits in the ISM (Industry Scientific and Medical) band, a set of frequencies set aside for low-power, short-range, license-free radios.

Note: Because of the low power and short range, the limited use of either frequency isn't likely to be an issue. But if you're planning on creating a commercial product or deploying a large number of modules, be sure you're using the correct frequency for your location.

How far will the signal reach? Outside with few obstructions, you should be able to get a solid link for hundreds of meters. Indoors we've seen it work for over 50 meters through multiple walls.

The RFM69HCW is capable of transmitting at up to 100 mW and up to 300 kb/s, but you can change both of those values to fit your application. For example, you can maximize range by increasing the transmit power and reducing the data rate. Or you can reduce both for short-range wireless sensor networks that sip battery power. 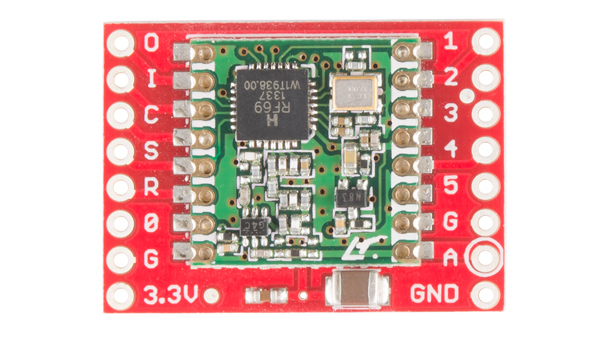 The RFM69HCW Breakout Board gives you access to all the pins on the RFM69HCW, but in the majority of cases you'll only need seven of them. Here's an overview of the pins we'll be using:

The unused pins labeled 1 to 5 have functions that we won't be using. See the RFM69HCW datasheet for more information.

IMPORTANT! Do not power your RFM69 with 5V or connect the data lines directly to a 5V microprocessor. Doing so will damage the device.

The easiest way to use this board is to connect it directly to a 3.3V Arduino such as the 3.3V Arduino Pro. However, you can connect it to a 5V Arduino if you use a logic-level translator. See the diagram in the Hardware Connections section.

In this tutorial we'll use two 3.3V Arduino Pros powered by the "Beefy 3" FTDI basics. We're using the Beefy 3 FTDI because it can provide up to 500mA, as opposed to the standard FTDI which can only provide 50mA.

TIP: If you don't have Beefy 3 FTDI boards, you can ensure that you have enough current by connecting your Arduino Pros to an external power supply such as a Wall Wart or Lipo Battery.
PROTIP: If your power supply can't provide 130mA, your Arduino may reset or lock up when you try to transmit. In these cases, a large capacitor placed between power and ground on the RFM69HCW board should help. This capacitor will store power while the board isn't transmitting and release it when it's needed.

Incidentally, the RFM69HCW uses 16mA when it's in receive mode, and it has several sleep options that use less than that.