Installing and Using the Arduino Library

Now that all of the nitty-gritty hardware stuff is out of the way, it's time to get to some Arduino coding! First, we'll get you set up with the SFE_MG2639_CellularShield library, then we'll delve into some example sketches.

Update Arduino! For the SFE_MG2639_CellularShield library to function properly, you'll need to be using an updated version of Arduino. Arduino 1.6.1 or above is required. Download the latest version of the IDE from arduino.cc.

(That release of Arduino included an improved version of the SoftwareSerial library, which the Cellular Shield library depends on.)

We've written an Arduino library specifically for the MG2639 Cellular Shield. Click the button below to download it, or clone it from our GitHub repository.

For help installing the library, please check out our Installing an Arduino Library tutorial. You'll need to copy the library into a "libraries" folder within your Arduino sketchbook.

To prove that your cellular shield is working, try running the most simple example sketch included with the library. MG2639_GetInfo.ino is a simple sketch that turns the shield on, verifies communication with it, and prints all sorts of information like your CIMI, ICCID, and phone number. 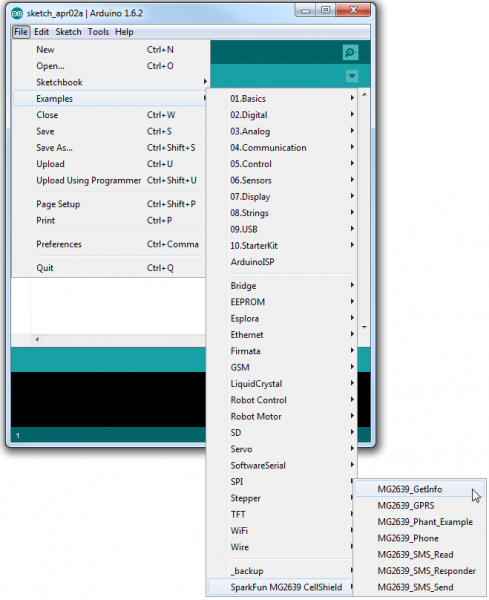 Then, after verifying that your SIM card, antennas, and power supply are all connected, upload the sketch.

To actually set the sketch into motion, open up your serial monitor and send any character. After a few moments, the monitor should respond with a number of information tidbits about your shield: 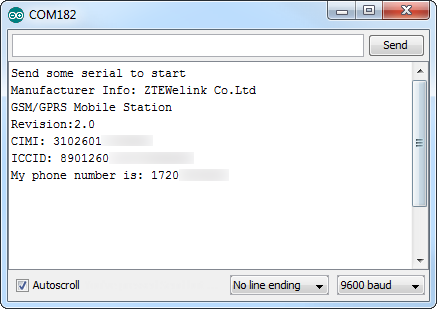 This example introduces a handful of functions and code lines you'll become very familiar with as you use the library. To begin, make sure you include the "SFE_MG2639_CellShield" library at the top of any sketch. The library also makes use of the SoftwareSerial library, which you'll need to include as well.

If your Arduino is not communicating with the module, try turning it on manually (via the BOOT button) and running the sketch again. If that fails, make sure you have enough power supplied to the shield -- the RSSI LED should be steadily blinking at 1Hz after turning on. If you're still not having any luck communicating with the module, get in touch with our tech support team and give them as much information about your setup as possible.

The most important piece of information you'll need is probably your phone number, if you don't already know it. You can use the cell.getPhoneNumber(char * phoneNumber) function for this purpose. For example:

Getting the module's CIMI, ICCID, and other information follows a similar pattern of passing an array by reference. Consult the comments in the sketch for help using those functions.