Reed switches are magnetically-actuated electrical switches (not magically-actuated, though it seems that way sometimes). When the body of the switch is exposed to a magnetic field -- like a magnet or even a strong electrical current -- two ferrous materials inside pull together, the connection closes, and current can flow. In absence of a magnetic field, the switch opens as does the circuit it's a part of. 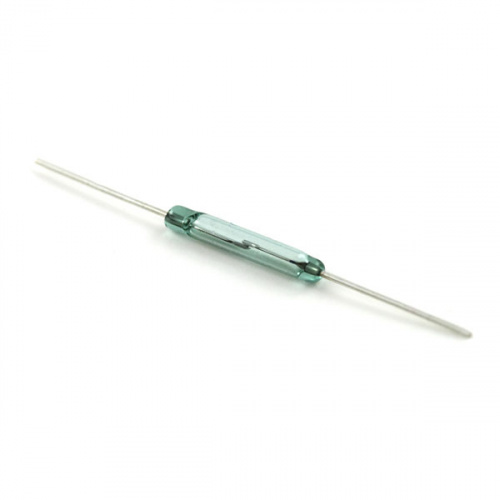 There are all sorts of creative applications for reed switches. They're perfect for any projects that require non-contact control. A magnetic door switch, for example, is just a dressed up reed switch and a mating magnet -- by keeping both parts of the switch separate, the door can open and close freely (and maintain its regular duties as a door). The anemometer in our weather meter combines a number of reed switches, which all open and close in order as the wind blows; count the time between switch closures to determine the wind speed.

This tutorial serves as a quick primer on reed switches and demonstrates how to hook them up and use them. Beyond the switch itself, the following materials are recommended:

Magnet -- You'll need something to actuate the reed switch, and this small magnet should fit the bill.

Arduino Uno -- We'll be using a digital pin on the Arduino to read the state of the switch. Any Arduino-compatible development platform -- be it a RedBoard, Pro or Pro Mini -- can substitute.

Breadboard and Jumper Wires -- With it's legs properly bent, the reed switch is breadboard-compatible. We'll use the breadboard as an intermediary between reed switch and jumper wires, which will connect the switch to an Arduino.

These are small rare earth magnets - 0.25" cubed. Composed of Neodymium/Iron/Boron (NdFeB), these magnets are curiously stron…

Read switches are a fun and easy-to-use component for beginners, but there are still a few basic electronics concepts you should be familiar with. If any of these tutorial titles sound foreign to you, consider skimming through that content first.

Welcome to the wonderful world of breadboards. Here we will learn what a breadboard is and how to use one to build your very first circuit.
Favorited Favorite 74

Reed switches come in a variety of shapes and sizes. Through-hole, surface-mount, insulated, pre-formed -- there are a lot of factors to consider.

The basic glass reed switches are relatively fragile. If you're project will feature large magnets repeatedly slamming against the body of the switch, consider upgrading to an overmolded variant.

You may also need to consider the current and voltage capabilities of your reed switch -- they're usually not designed to carry a high amount of power. The glass switch we're using in this tutorial is rated for a maximum of 1.2A and 10W. Higher-power-capable switches are hard to find and can be expensive.

One thing all of these switches have in common is the two-terminal interface. But whether those terminals are normally open or closed is another question. The reed switch we'll be using in this example is normally-open. That means "normally", when the switch is unaffected by a magnetic field, the switch is open and does not conduct electricity. When a magnet comes close enough for the switch to activate, the contacts close and current can flow.

Looking for a normally-closed switch? You can make one by adding a second magnet. Check it out!

Just as your magnet may have two poles, the reed switch's pair of ferrous contacts are also polarized. The position, distance, and orientation of your magnet all play a role in determining how the switch activates.

These example graphs, from the Hamlin App Note AN104 do a great job of demonstrating how the position of the magnet affects the activation of the switch.

The polarity and position of the magnet plays an important role in how your reed switch activates. If your switch doesn't seem as sensitive as you'd like, try placing the magnet to one side or the other. Make sure you test the pair of components out before mounting either in place.

The circuit set up for this example is about as easy as can be. First bend both legs of the switch to point perpendicularly away from the body of the switch, so they form a "U" shape.

Fragile! The body of the glass-tubed reed switch is very delicate. While you're bending the legs, try not to place any stress on the body of the switch.

Insert the reed switch into the breadboard. Then use jumper wires to connect one end of the switch to ground and the other end to the Arduino's D2 pin. Here's an example circuit: 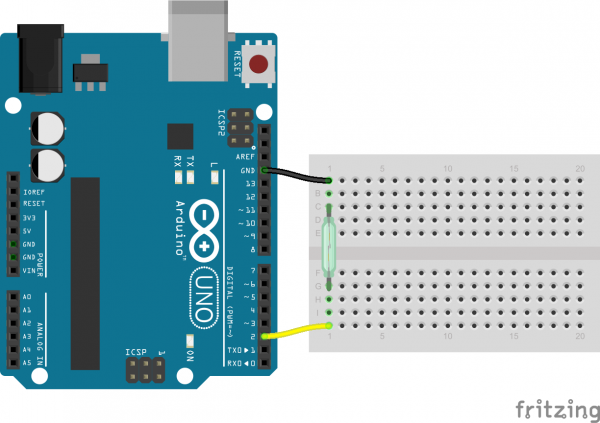 That's all it takes! We'll use the Arduino's internal pull-up resistor on pin 2 to bias the switch high. When the switch closes, it will connect pin 2 directly to ground, and it should read low.

The sketch depends on an LED being attached to the Arduino's pin 13. That should be the case on 99% of the Arduino boards out there, but, if yours is different, you may need to check the serial monitor for verification of the switch's operation.

Reed switches are a perfect trick for non-contact activation applications. We used a reed switch to detect when the doors of this TARDIS-themed music box opened. Or you can hook a large, door-specific reed switch up to a Blynk Board and have it send push notifications to your phone when the door state changes.

Now that you've got a reed switch wired up to your Arduino, what are you going to create? Need some inspiration, check out some of these related SparkFun tutorials:

Create your own Linking Book from the classic computer game, MYST
Favorited Favorite 3

A series of Blynk projects you can set up on the Blynk Board without ever re-programming it.
Favorited Favorite 18
Share
Use this URL to share: