The circuit for the wearable LED harness is simple. Let's take a look at the left side of the harness that holds the battery, adapters, and LEDs.

Power is connected to the "+12V" pad of the non-addressable LED strip. To complete the circuit and power the LEDs, ground is connected to each color's pad labeled "G," "R", or "B." Green and blue were chosen to make cyan from the primary colors. For one side of the harness, LED segment A consisted of a long strip of 33x LEDs. LED segment B and C consisted of 3x LEDs each. 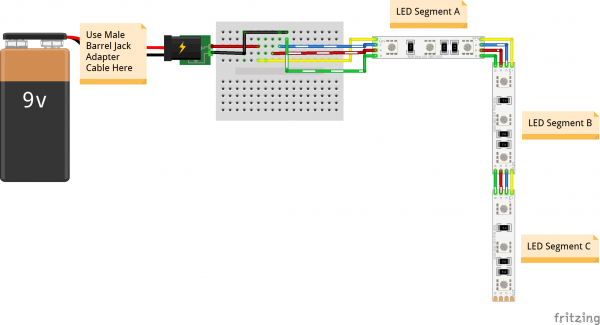 Having a hard time seeing the circuit? Click the image for a closer look.
Note: When testing the non-addressable LED strip, the pin labeled "G" was actually blue and the "B" was actually green. Depending on the manufacturer, the label may vary. Try testing the LED strip out with a power supply to determine see if the letter represents the color.

A 9V battery and custom made adapters were used for each harness. Keep in mind that a 9V battery is not able to power all three colors simultaneously. However, using two colors was sufficient enough for the project and performance.

Warning! You may need a transistor and microcontroller to control the power delivered to the LEDs depending on the type of battery that you are using. Remember to check with a multimeter and test it out thoroughly.

The connection was then wired in parallel on the other side of the harness by connecting to the same rails on the solderable breadboard. 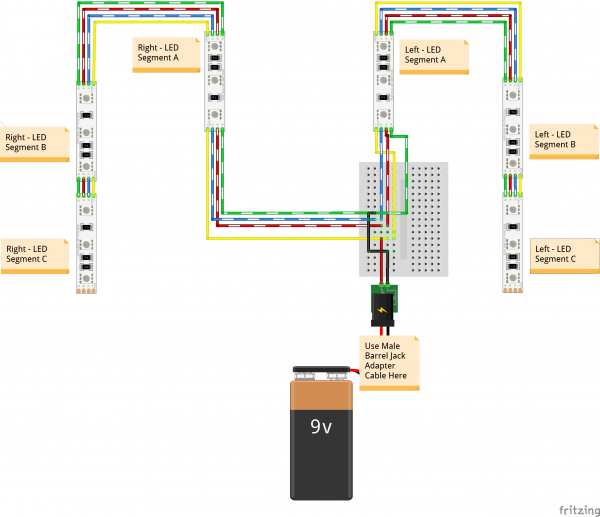