It's very uncommon to program ICs before they are soldered onto a PCB. Instead, most microcontrollers have what's called an in-system programming (ISP) header. Particularly, some IC manufacturers, such as Atmel and Microchip, have a specialized ISP method for programming their ICs. This is referred to as in-circuit serial programming (ICSP). Most Arduino and Arduino compatible boards will have a 2x3 pin ICSP header on them. Some may even have more than one depending on how many ICs live on the PCB. It breaks out three of the SPI pins (MISO, MOSI, SCK), power, ground, and reset. These are the pins you'll need to connect your programmer to in order to reflash the firmware on your board. 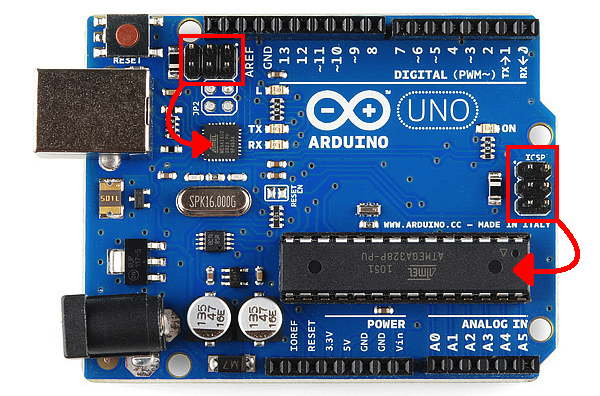 On some smaller boards you may not see this connector, but the pins should be broken out elsewhere. Whether you're using an SMD IC or a DIP IC, the ISP pins should be accessible in one form or another. Some boards might only have test points for the ISP header. If this is the case, you may want to consider getting an ISP Pogo Adapter. This kit allows you to temporarily make a good connection with test test points in order to reprogram your IC. 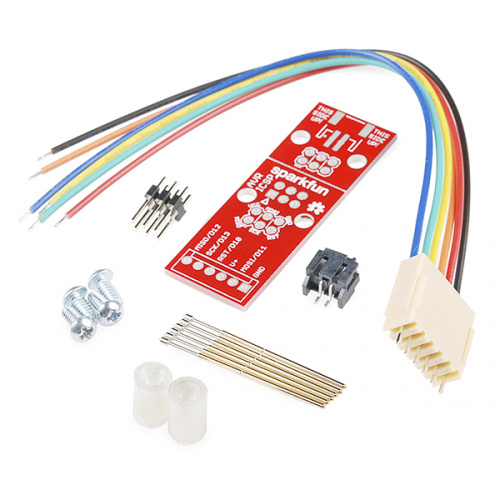 $13.95
4
Favorited Favorite 12
Wish List
Note: If you are having trouble finding the ICSP pins on your particular Arduino board, simply check out the Eagle board files or graphical datasheet for the development board. At SparkFun, we have generated a few graphical datasheets for select boards that we manufacture.

Once you have located the six ICSP pins on your board, it's time to hook up your programmer to the board. You can use a programming cable to connect the two, or, if you don't have a cable, you can just use some male-to-female jumper wires.

This is a handy AVR programming cable that incorporates both the 10-pin and 6-pin ISP programming interfaces. Cable is a…

If you are using a programmer such as the pocket AVR programmer, your setup should look something like the connection below with the AVR programming cable's arrow (◄) connected to MISO. If you look really closely at the molding of the 2x3 connector, you should be able to notice the arrow (◄) pointing to pin 1 relative to the position of a standard ICSP header. 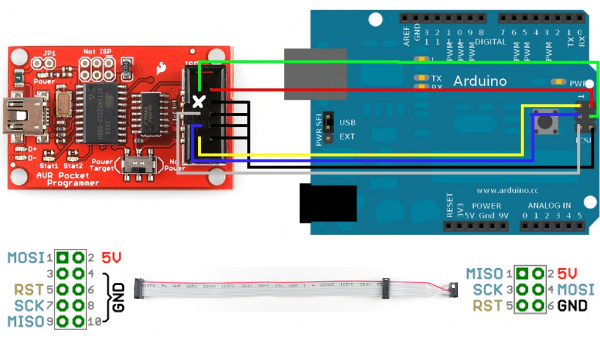 Click for larger image.
Heads up! There is a subtle difference in the orientation of the 2x5 to 2x3 AVR programming cable compared to other 2x3 cables that are attached to official Atmel programmers. As shown in the image below with MISO highlighted by a white dot, the pocket AVR programmer's cable has MISO connected closer toward the inside of the cable. The AVR MKII's cable has MISO connected closer toward the outside of the cable. 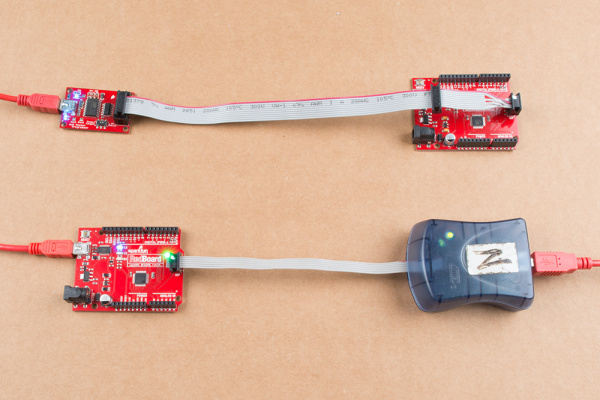 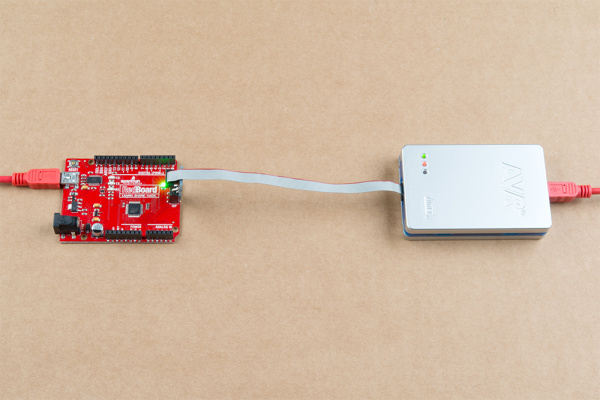 Connecting the Arduino as ISP to Target

Or, if you're using the Arduino as your programmer, it should look the image below. Make sure to power the Arduino as ISP by connecting it to your computer. 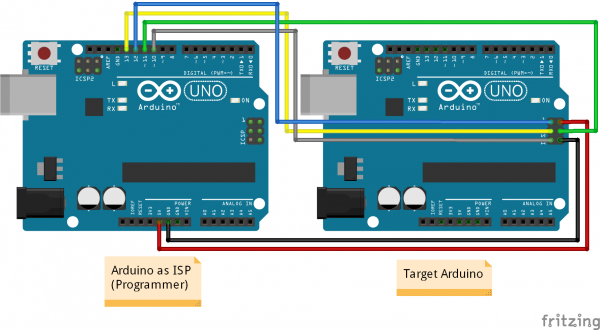 Here's a table to help clarify which connections go where. Depending on the Arduino, you may have access to the ICSP pins only on the 2x3 ICSP header. Make sure to refer to the board layout for more information on the Arduino's SPI connections.

Warning! The connection is for a 5V Arduino. If you are connecting to a Arduino that is using a lower voltage, make sure to safely convert the logic levels using a converter between the programmer and target Arduino.

This is a breakout board for the Texas Instruments TXB0104 module. The TXB0104 is a 4-bit bidirectional voltage-level transla…

Learn the difference between 3.3V and 5V devices and logic levels.
Favorited Favorite 80
Share
Use this URL to share: