How Does GPS Work?

GPS receivers use a constellation of satellites and ground stations to compute position and time almost anywhere on earth.

Notice the moving point on the globe and the number of visible satellites.

At any given time, there are at least 24 active satellites orbiting over 12,000 miles above earth. The positions of the satellites are constructed in a way that the sky above your location will always contain at most 12 satellites. The primary purpose of the 12 visible satellites is to transmit information back to earth over radio frequency (ranging from 1.1 to 1.5 GHz). With this information and some math, a ground based receiver or GPS module can calculate its position and time.

How Does a GPS Receiver Calculate Its Position and Time?

The data sent down to earth from each satellite contains a few different pieces of information that allows your GPS receiver to accurately calculate its position and time. An important piece of equipment on each GPS satellite is an extremely accurate atomic clock. The time on the atomic clock is sent down to earth along with the satellite’s orbital position and arrival times at different points in the sky. In other words, the GPS module receives a timestamp from each of the visible satellites, along with data on where in the sky each one is located (among other pieces of data). From this information, the GPS receiver now knows the distance to each satellite in view. If the GPS receiver’s antenna can see at least 4 satellites, it can accurately calculate its position and time. This is also called a lock or a fix.

Did you catch all of that? If not or if you want more, check out a much more detailed explanation, in volume 1 of GPS Fundamentals by Dan Doberstein. Volume 1 has been released for free, but you must support the author to read volume 2. 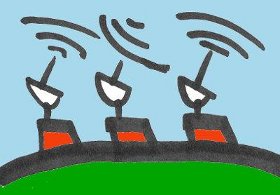 An artist's rendition of the control segment.

There is another piece of the global positioning system we haven’t talked about. Along with satellites and GPS receivers, there are ground based stations that can communicate with the satellite network and some GPS receivers. This system is formally called the control segment and increases the accuracy of your GPS receiver. Common systems that use the control segment to improve accuracy are WAAS and DGPS. WAAS is common on most GPS receivers and improves accuracy to about 5 meters. DGPS requires a specific type of GPS receiver and gets centimeter accuracy. DGPS units are also expensive and tend to be larger because they require an additional antenna.