GPS Accuracy depends on a number of variables, most notably signal to noise ratio (noisy reception), satellite position, weather and obstructions such as buildings and mountains. These factors can create errors in your perceived location. Signal noise usually creates an error from around one to ten meters. Mountains, buildings and other things that might obstruct the path between the receiver and the satellite can cause three times as much error as signal noise. A GPS receiver must be able to get a lock on 4 satellites to be able to solve for a position. The first lock it gets allows the receiver to obtain the almanac information and thus what other satellites it should listen for. Although it is possible to get a position from less than 4 satellites, the margin of error of this position can be rather large. Your most accurate read of your location comes when you have a clear view of a clear sky away from any obstructions and under more than four satellites. To combat these errors, a couple of different assistants have been created.

One of these ancillaries is Assisted GPS or AGPS. This method uses wireless (ground-based) networks to help relay between the satellite and the receiver when the GPS signal is weak or not able to be picked up. There are two ways AGPS can help out. The first is to provide the receiver with the proper almanac data and the precise time. The second utilizes the higher computing power and good satellite signal of the ground base to interpret the broken or fragmented information the receiver is receiving to provide a more accurate position reading to the receiver. AGPS is mostly accomplished by GPS receivers mounted on cellular towers. When communicating with these receivers, the GPS can acquire a lock on the satellite more quickly as well as receive more accurate information. This method is what is used for GPS in mobile phones and why they’re sometimes more accurate than the GPS receivers on their own. But AGPS is present in more devices than just cellphones; it's even available in cameras and some vehicles. It’s most beneficial in cities where the GPS signal may have a difficult time making it through the dense maze of the buildings.

Another method is Differential GPS or DGPS. DGPS also uses ground or fixed GPS stations to determine the location, but differs in that it finds the difference between both the satellite and the ground location reading. These ground stations may be up to 200 nautical miles from the receiver, and it is important to note that accuracy deteriorates the further you are from the ground station. DGPS is accomplished by a ground station broadcasting a signal which dictates the error between the actual pseudorange and the measured pseudorange. This value is calculated by multiplying the speed of light by the time it takes the signal to travel from the satellite to the receiver. As an example, one form of DGPS is Wide Area Augmentation System or WAAS. 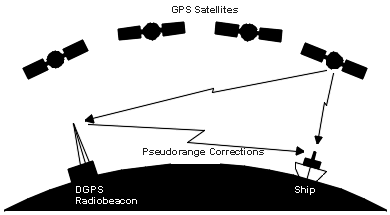 Originally developed by the FAA to assist aircraft GPS, WAAS uses a system of specifically built ground stations. WAAS holds a specific set of accuracy standards that ground station measurements must meet. Laterally and vertically, WAAS must be accurate to within 7.6 meters 95% of the time. These ground stations send their measurements to master stations which send the corrections to WAAS satellites every 5 seconds or quicker. From the Satellite, a signal is broadcast back to the receivers on earth where the corrections are used to improve the GPS accuracy. In some locations, WAAS is able to provide an accuracy of 1 meter lateral and 1.5 meters vertically. While WAAS is only present in North America, similar systems are in place in many other parts of the world.

Note: Looking for other techniques to increase your accuracy? Check out the tutorial on GPS RTK.

What is GPS RTK?

Learn about the latest generation of GPS and GNSS receivers to get 14mm positional accuracy!
Favorited Favorite 6