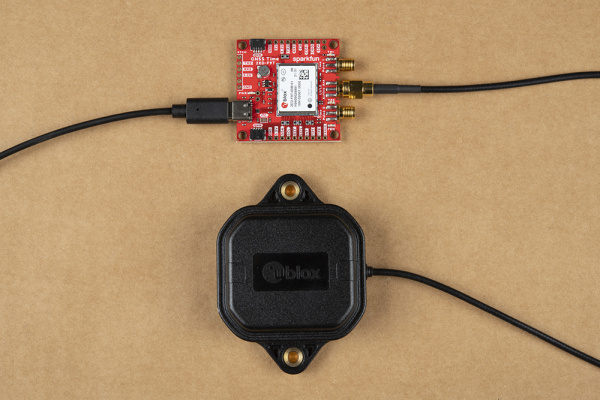 Initial setup and use of the GNSS Timing Breakout only requires a USB-C cable and GNNS antenna connected to the board. On first connection, drivers should automatically install. In case drivers do not install, head over to this section of our Getting Started with u-center for u-blox tutorial. Verify the port the device enumerated on and either open u-center (Windows only) to interact with and configure the device. Users who prefer to can use a serial terminal program and the Interface Description document.

With a clear view of the sky, the ZED-F9T should achieve a lock within 26s from a Cold Start (2 seconds from a Hot Start).

Assembling the GNSS Timing Breakout into an Arduino circuit is easy thanks to the Qwiic system. Simply connect a GNSS antenna to the SMA connector and then connect the breakout to a Qwiic-enabled microcontroller like the SparkFun Thing Plus - ESP32 WROOM using a Qwiic cable. 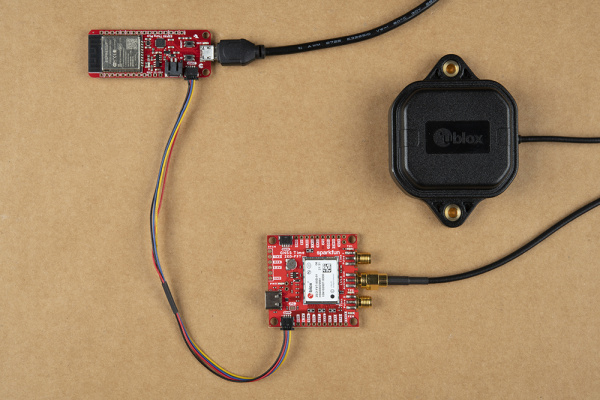 Reminder: The pullup resistors on the SDA/SCL lines on the GNSS Timing Breakout are disabled by default. You may need to close th I2C jumper in certain configurations when communicating over I2C.