There are two versions of this Arduino sketch -- one for WiFi and another for Ethernet. Both achieve the same result, they just include different libraries, and use different interfaces to get there. Download your preferred sketch below:

For both sketches, you can modify the emailUpdateRate variable above setup() to adjust the frequency of your mail checks. At 10000, it'll check your mail every 10 seconds. We don't recommend checking more often than that.

Once you've made your fine tunings, upload the sketch to your Galileo.

For debug purposes, the Arduino sketch will print a handful of messages to the serial monitor (9600 bps). This is especially handy if you don't have a display attached -- the unread email count will be printed here too.

If you do have a OpenSegment Shield attached, you should initially see the display turn to "0000". Every 10 seconds, as the email checker runs, you may see that value change. Try sending yourself an email! Does the counter go up? Read the email. Does it go down? 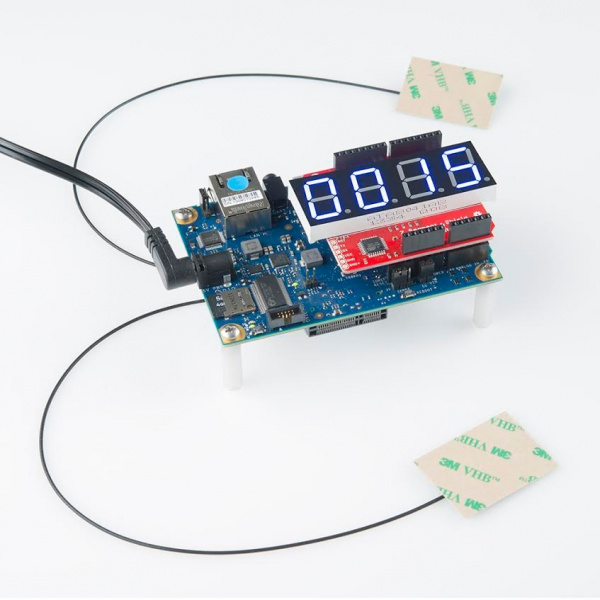 15 unread emails. Can Python answer my emails too?

Now you'll never be the last to see the latest silly email thread!

There are a few key lines of code here that you'd never see on an Arduino Uno, Mega, or the like. First and foremost to that are the system() function calls.

The system(const char * command) function is a standard C function which is used to issue a command to your operating system's command processor. With this function, your Arudino sketch can interact with Linux, just as you might through a terminal, over the command line.

Each system function takes a single parameter: an array of char's (i.e. a string of characters). The character array can be any system function -- you could stick something like "mkdir foo" in the system function, and your Arduino would ask the Linux kernel to make a directory called "foo".

In this sketch, we use the system function to run our Python script. The first system call is in the getEmailCount() function:

This is a call to run the pyMailCheck.py script, and route the output to a file called "emails". So instead of printing the number of unread emails to the terminal, our script will place that value in a file. The "/media/realroot/" directory is where the Linux kernel finds the "top level" of our SD card.

To read the unread email count returned by the Python script, all we need to do is read the contents of the "emails" file. This can be done with the included Arduino SD library.

To read from the SD card, simply open the "emails" file with the SD.open function, and read to the end with the File.read function. A little bit of parsing and converting is required to turn the string of characters to an integer value.

The OpenSegment supports all sorts of communication standards -- serial, I2C, and SPI. All are supported by the Galileo, but SPI was the only one that didn't seem to require any extra modification to the shield.

To interface with the display, the SPI library (included with Arduino) is used. Check the bottom of the sketch to see a couple of helper functions, which can write a single byte or a string of bytes to the display.