By creating a voltage divider with the FSR and another resistor, you can create a variable voltage output, which can be read by a microcontroller’s ADC input.

The tricky part of voltage-dividing an FSR is selecting a static resistor value to pair with it. You don't want to overpower the maximum resistance of the FSR, but you also don't want the FSR's minimum resistance to be completely overshadowed either.

It helps to know what range of force you'll be reading. If your project's force-sensing covers the broad range of the FSR (e.g. 0.1-10kg), try to pick a static resistance in the middle-range of the FSR's resistive output -- something in the middle of 200-6kΩ. 3kΩ, or a common resistor like 3.3kΩ, is a good place to start.

Short on Resistors? If all you have is 10kΩ resistors (looking at you Sensor Kit visitors), you can still make something close to 3k! Try putting three 10kΩ's in parallel to create a 3.33kΩ monster resistor. Or put three 330Ω resistors in series to create a 990Ω concoction, which will work pretty well too.

Warning: As stated on page 10 of the Interlink FSR Integration Guide, the FSR's flexible substrate is sensitive to heat. It is not recommended to solder directly to the exposed silver traces or apply high temperatures to the clamped pins for long periods of time. For users that do not have that much experience soldering, try using ZIF sockets or clamping the sensor with a Force Sensitive Resistor Pin Adapter.

Here's a Fritzing diagram combining the Interlink FSR, 3.3kΩ resistor, three jumper wires and the Arduino. The circuit will be the same for TekScan. You'll just need to adjust the resistor value accordingly. 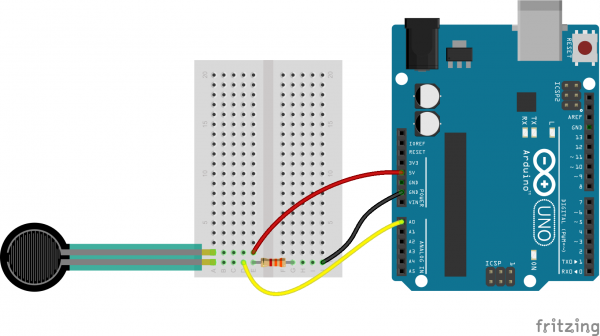 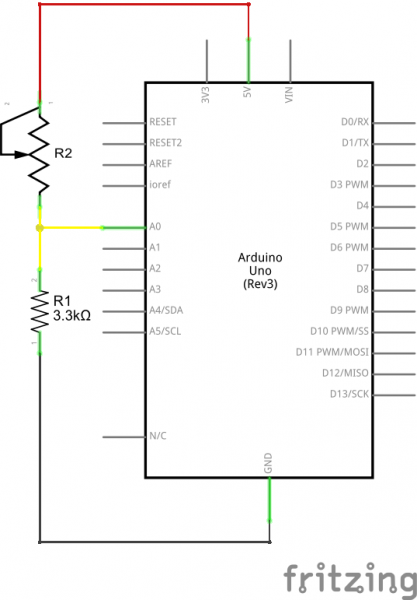