These DIY Light-Up Kicks are high top sneakers embedded with a WS2812 Addressable LED Strip and a Qduino Mini Microcontroller. The LEDs are easily programmable and re-programmable for countless customizations of color, pattern, and animation. In this tutorial we will go through the step-by-step process of building this project. 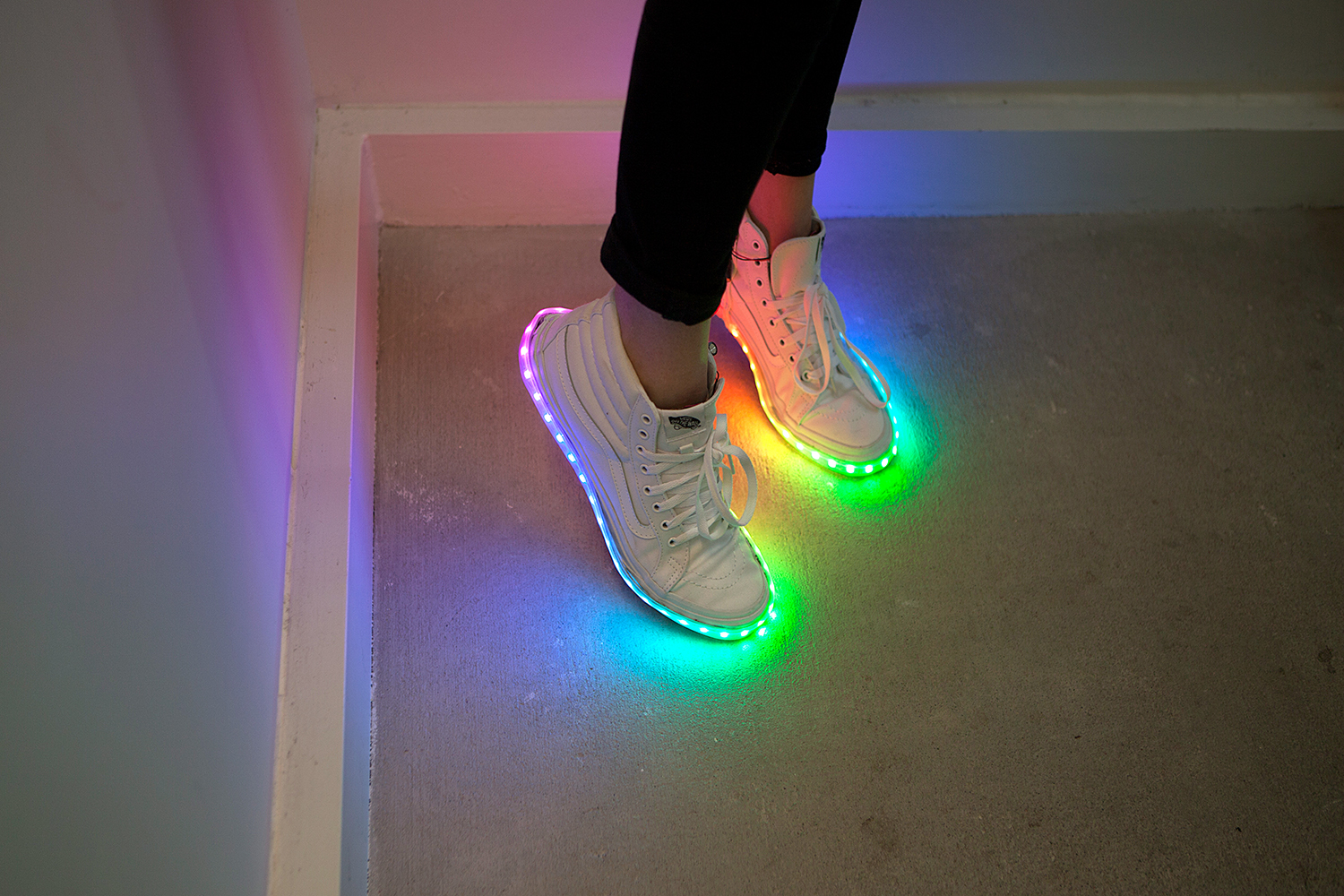 To follow along with this guide, you will need the following:

How to strip, crimp, and work with wire.
Favorited Favorite 50

The two main components that the Light-Up Kicks use are the following: 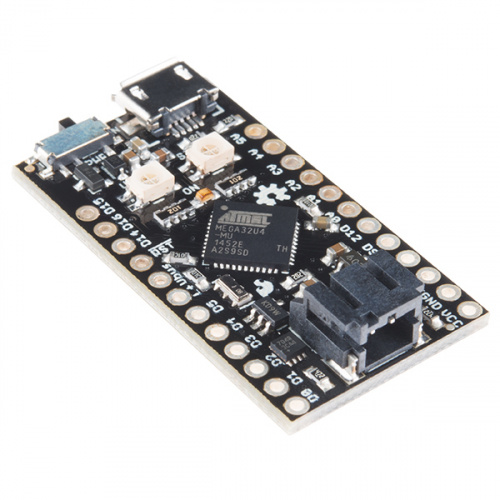 The Qduino Mini is a tiny, Arduino-compatible board with a battery connector and charger built-in as well as a fuel gauge tha…

The brains behind the Light-Up Kicks are a set of Qduino Mini - Arduino Dev Boards, a small Arduino-compatible microcontroller that includes a switch AND a LiPo battery connector.

This board also features: 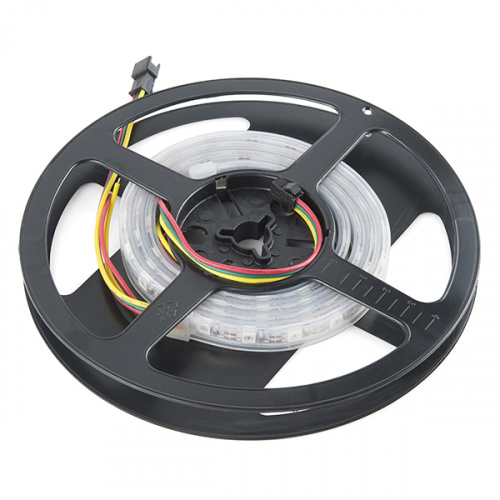 Gone are the days that you have to worry about silicone weather proofing splitting and breaking on you! These are sealed addr…

The WS2812 Addressable LED Strip is a long strip with WS2812 RGB LEDs. Each individual LED is addressable through your microcontroller. They are preterminated with 0.1" spaced 3-pin connectors as well as a 2 wire power connector. Hooking these LEDs up to a microcontroller can be done by either soldering leads to the connection pads or using the existing wire power connectors. DIN should always connect to a digital pin which will be assigned to the LED strip in your code. VCC and GND can connect to their respective pads on the Qduino Mini. A longer strip might need a more powerful or separate power source than this project requires.

Note: It is usually advised to include a small smoothing capacitor in between VCC and GND of your LED strip to protect the first few LEDs from power surges. While it is suggested to use the smoothing capacitor with the addressable LEDs, the LiPo battery provides sufficient power to the addressable LEDs without any fluctuations in current drawn by the LED strip. In this setup, it is not necessary to use a capacitor.

The Qduino Mini - Arduino Dev Board is programmable via the Arduino IDE. If this is your first time using Arduino, please review our tutorial on installing the Arduino IDE.

Qduino Drivers and Board Add-On

If this is your first time working with the Qduino, you will need to add the board through the boards manager to your program. Please visit the Qduino hookup guide for detailed instructions on installing drivers and programming a Qduino via the Arduino IDE.

If this is your first time working with addressable LEDs, you will also need to download the Adafruit Neopixel Library. For Arduino IDE users, click on the button below to download a copy of the NeoPixel library along with some example code SparkFun has created.

The below code is designed to animate a strip of 39 addressable LEDs. In order to test before soldering, our first step will be to program the microcontrollers.

When you are ready, copy and paste the below program into a new window in your Arduino IDE. Update the value for int numPix to reflect the number of pixels on your strip around the shoe's sole. Make sure the correct board is selected by going to Tools > Board > Qduino Mini. Then, connect your Qduino to your computer via USB. Turn it on, and select the active port from Tools > Port. Now all you need to do is upload the program to your Qduino by hitting the upload button!

To test the program before putting it together on the shoe, try using a combination of IC hooks, alligator clips, and jumper wires to create the circuit shown below and turn on your Qduino. Make sure to connect the LiPo battery to the Qduino for sufficient power. If the LEDs animate with rainbow patterns, you are ready to move on!

Now that we have tested our program with our parts, it's time to put everything together.

Measure the length of your shoe's sole with the LED strip. While taking note of the length, cut one LED strip to the desired shoe length between the gold pads. Cut part of the flexible silicon jacket that is used to seal the addressable LED strip so that there is room to solder to the pads.

Then cut three pieces of hook-up wire, around 3-4 inches each. Strip a tiny bit at one end of each piece. 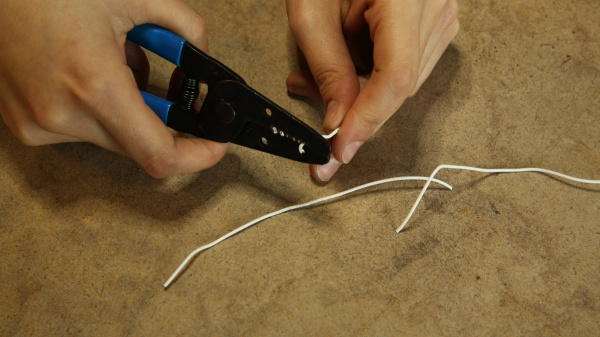 Solder each wire to each of the three pads on the LED strip. 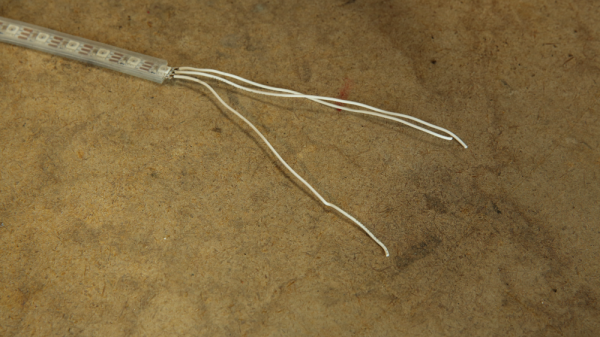 Heads up! Make sure to solder to the DIN pad and not the DOUT pad on the opposite side of the strip. The strip will not work if you have connected to DOUT. 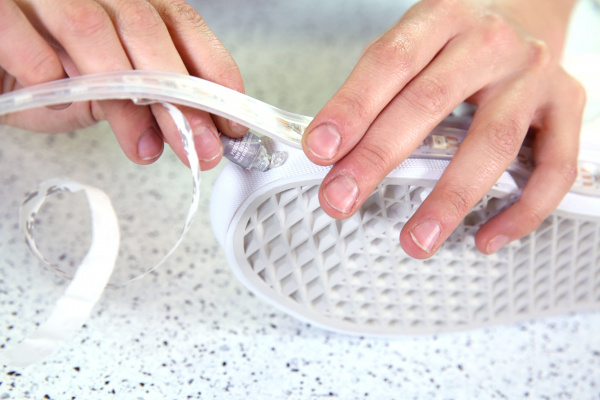 Make a small hole in the shoe directly above the end of the strip with the leads attached. 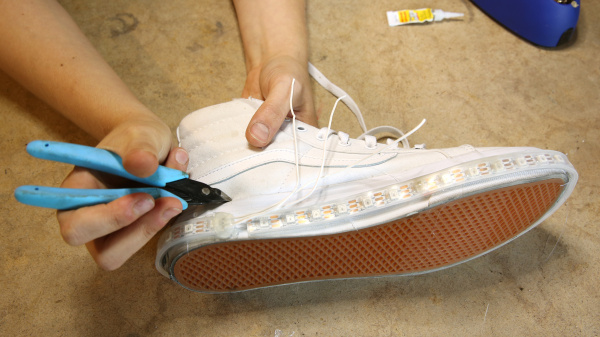 Thread the soldered leads through the hole from the outside to the inside of the shoe. 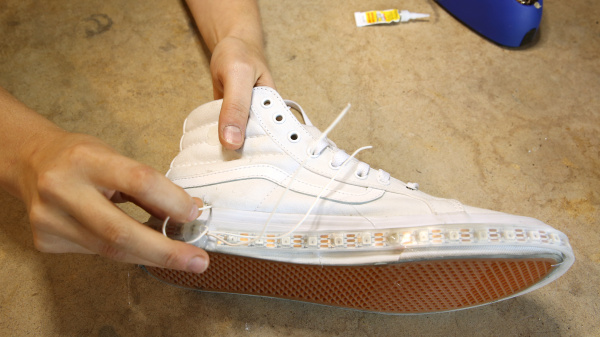 Glue the programmed Qduino to the inner ankle area, making sure to place it in a way that it will not rub against your body. 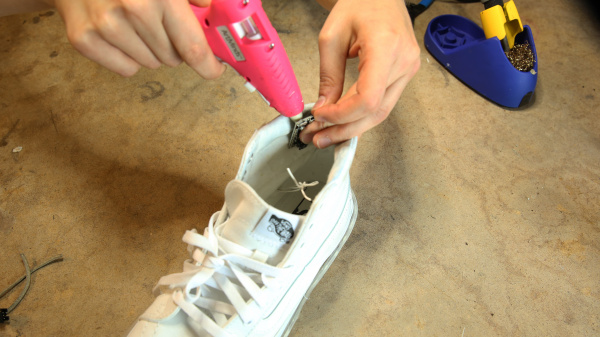 The following diagram illustrates the circuit we will be putting together visually.

Carefully solder the LED strip leads to the Qduino. 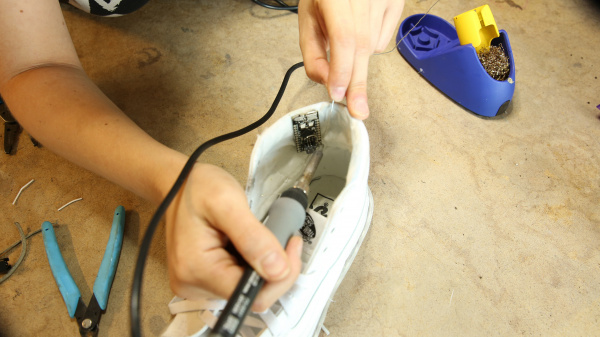 Insulate all exposed wire and solder with hot glue. 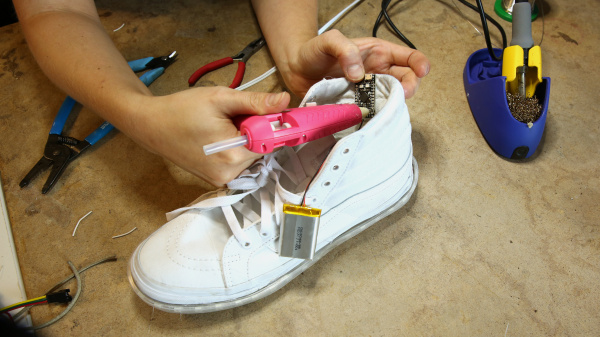 Add a small piece of Velcro to the outer side of the shoe, directly on top of the area with the Qduino glued on the other side. 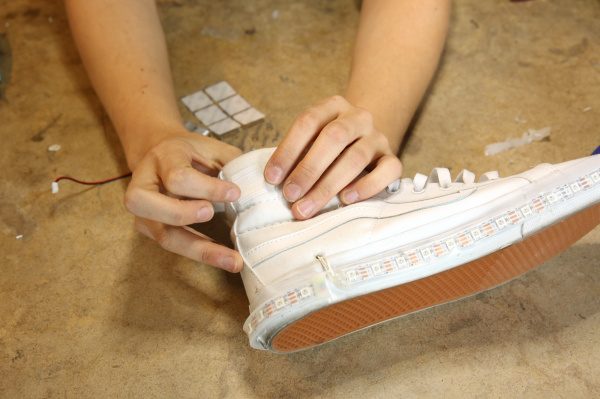 Add the complimentary piece of Velcro to one side of your battery. 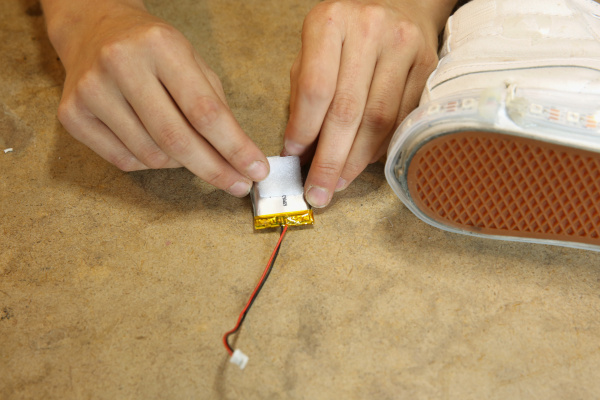 *PLEASE NOTE: It is never a good idea to apply heat to a LiPo battery using a hot glue gun. A safer solution is to secure the battery with Velcro.

Poke another hole in the shoe, this time right below your Qduino. 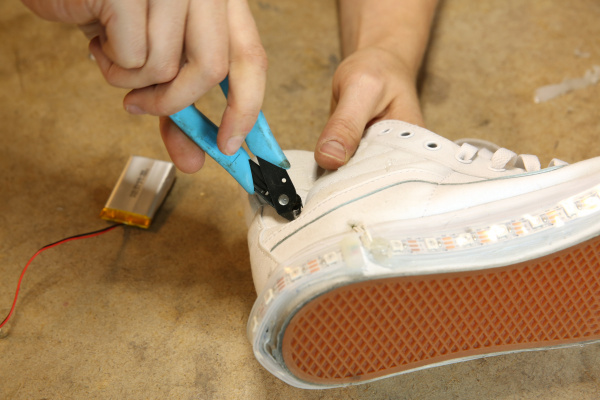 Thread the battery leads through the new hole from the outside to the inside. 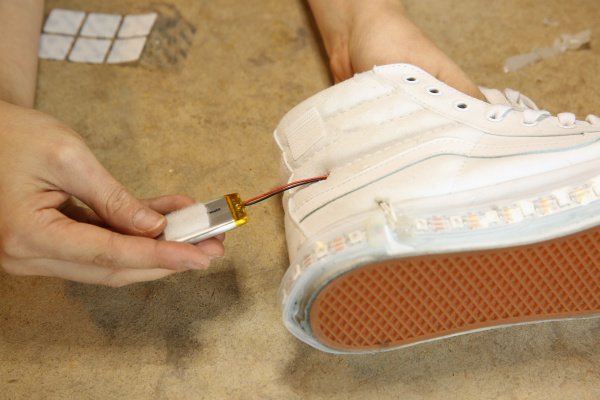 Attach the battery to the outer side of the shoe via the Velcro. 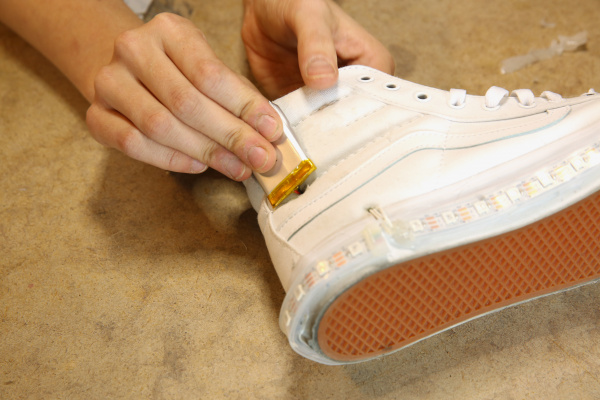 Connect the battery to the Qduino via the JST connector. 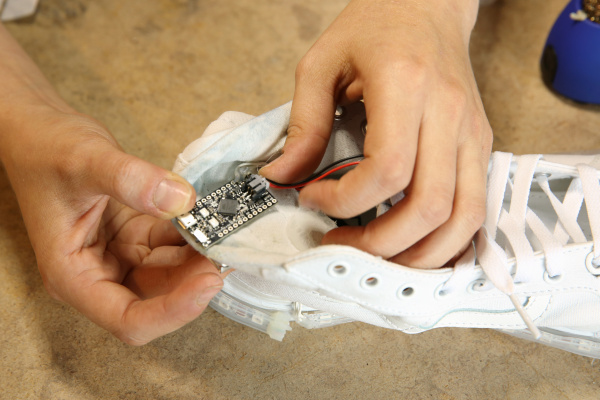 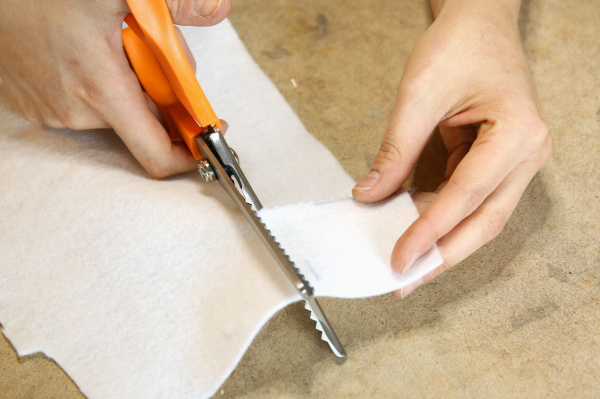 Sew or super glue the felt patched over your electronics, protecting them from the elements as well as protecting your ankles from scratching against the hardware. 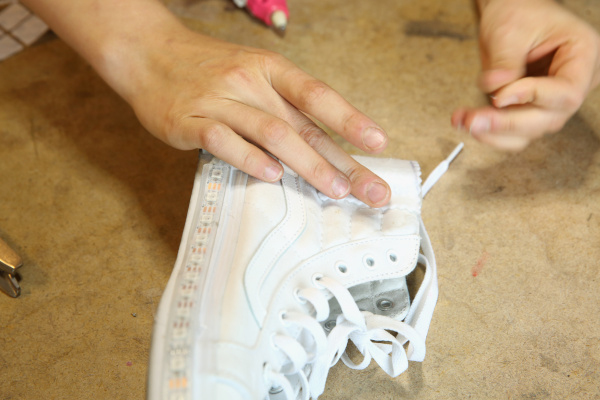 Repeat steps 1-16 for the other shoe.

Use the switch on the Qduino to turn your shoes on, and enjoy! 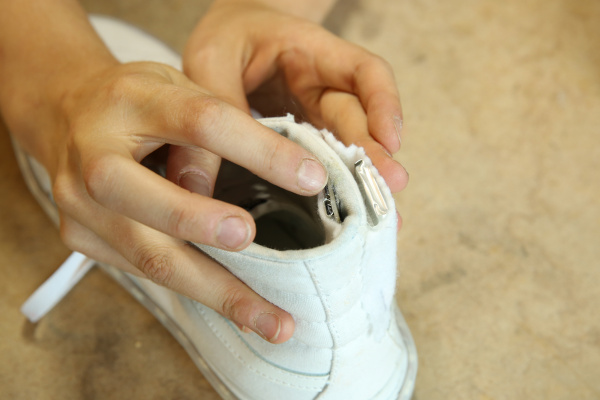 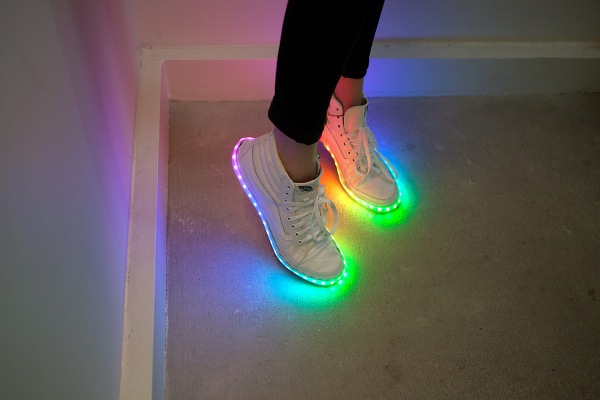 Now that you've successfully made your own DIY Light-Up Kicks, it's time to design your own LED animation! If you'd like to learn more about the QDuino Mini or the Neopixels, you should check out these links:

This tutorial provides everything you need to know to make your own Marquee Party Bag!
Favorited Favorite 6

Light up the world - and your wrist - with this quick and easy rechargeable firefly LED bracelet.
Favorited Favorite 13

Follow this tutorial to make your own Crystal Goddess Crown with LEDs!
Favorited Favorite 6

Embedded with heating pads and four Neopixel rings, these earmuffs do more than your average winter accessory to keep you warm while still looking good.
Favorited Favorite 5
Share
Use this URL to share: