Controlling servos in loops can be good for projects where you just want something moving while powered but what if you want more of a direct ability to control your servo? This project looks to demonstrate how to do just that!

Looking for an easy way to implement a joystick to your next Arduino or Raspberry Pi project? This hookup guide will walk you through using the Qwiic Joystick with the Arduino IDE on a RedBoard Qwiic and in Python on a Raspberry Pi.
Favorited Favorite 3

To follow along with this example project you will need the following materials. Depending on what parts you already have, you may want to update your cart accordingly. 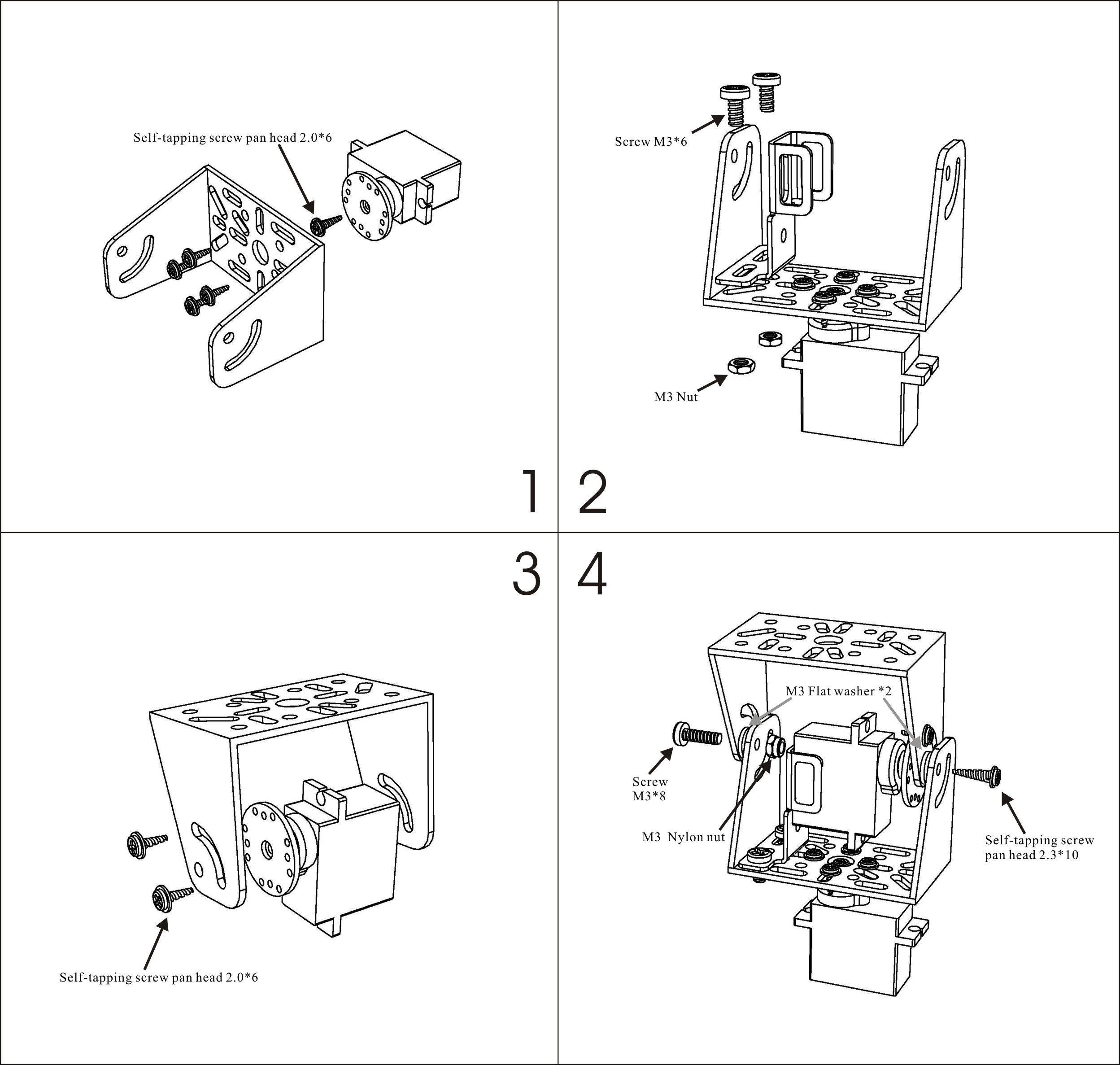 Pan/Tilt Bracket Assembly Guide
Assembly Tips:
Take care to align the servos properly so you can take advantage of the full range of motion and avoid having to re-seat the servos once everything is wired up.

Depending on the fit, you may need to use three washers for spacing instead of 2 like the guide suggests.

With the pan/tilt bracket assembled, connect the signal wires of the servos to the assigned I/O pins on your RedBoard and connect the Qwiic Joystick to the RedBoard with a Qwiic Cable. The example code uses D9 for the horizontal servo and D10 for the vertical servo by default but you can connect them to other pins if needed by modifying the servoH.attach(9); and servoV.attach(10); functions.

Finally, we need to connect the power supply pins for our servos. Just like with the Arduino Servo Library example from earlier, we are going to use the VIN pin on our RedBoard since the 5V pin can only source up to 250mA and our pan/tilt servos can pull in excess of 350mA with nothing attached to the bracket.

Since we have two servos for our pan/tilt bracket, we will use a breadboard to net the power pins for the servos together.

Note: If you have never used a breadboard before, we recommend taking a look at our How to Use a Breadboard tutorial.

Heads up! Just like with the simple Arduino example, the VIN pin works just fine to drive our servos when connected to a USB port since it outputs 5V but if you use another power source for your circuit, make sure to power the servos within their voltage range. For the servos used in this project (and most other hobby servos), that is 4.8-6V. 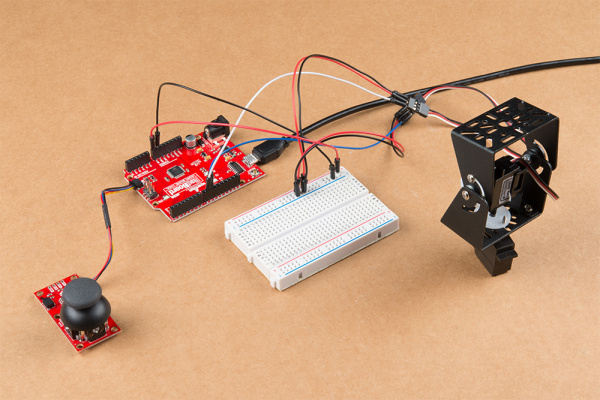 Having trouble seeing the circuit? Click the photo for a larger view.

With everything wired up, it is time to upload our code. First, we need to install the Qwiic Joystick Library if it is not installed already. You can manually install it by downloading it from the link above but we recommend installing the library through the Library Manager tool. Simply open that up and search for "SparkFun Qwiic Joystick" and click install. If you've never installed an Arduino library before, our Installing an Arduino Library Tutorial covers the entire process.

Now that the library is installed, go ahead and copy the code below and paste it into a new sketch. Select "Arduino/Genuino Uno" as your board (or if you are using another development board, select that) as well as the "Port" your board is on and upload the code.

Here are some tips if you run into some common pitfalls with this example.

If you end up getting any compilation errors such as avrdude stk500_recv() programmer is not responding or something similar regarding the target device (aka our RedBoard), make sure you have selected the correct Port for your RedBoard as well as the correct board type.

If you see errors similar to SparkFun_Qwiic_Joystick_Arduino_Library.h: No such file or directory, the Qwiic Joystick library was not installed properly. Check to make sure the library is installed and is the latest version using the Arduino Library Manager tool.

Since we are using a breadboard for this example, a common cause of any power issues (e.g. the entire circuit is not turning on when plugged into USB) is a misplaced wire. Check that you have all of your power and ground wires properly connected on your breadboard. A common error is one or more of the wires is backward (i.e. power to ground or vice versa). Verify those are plugged into the right rail on your breadboard and are making a good connection to both the servo and your RedBoard.