Note: This tutorial covers the latest version of the SparkFun Analog MEMS Microphone Breakout (BOB-19389). We designed the updated version as a drop-in replacement so users with the previous versions of this breakout board (BOB-9868 or BOB-18011) can follow along with this tutorial. For specific details regarding the microphone ICs, refer to the Documents tab on their product pages or the previous release of this Hookup Guide:

The SparkFun Analog MEMS Microphone Breakout - SPH8878LR5H-1 is a simple and easy-to-use microphone for a variety of sound-sensing projects. The on-board microphone is a low-power, omnidirectional microphone with an analog output. It works for both near and long-range uses and is particularly good for portable applications due to its low power consumption. Possible applications include: smartphones, digital video cameras, and keeping an "ear" on your pets while you're away. 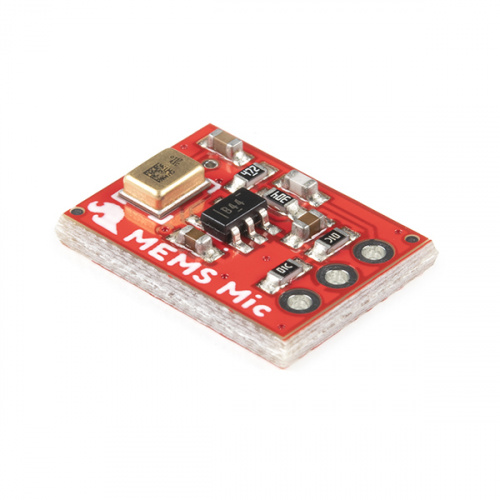 The SparkFun Analog MEMS Microphone Breakout makes it easy to work with the SPH8878LR5H-1 analog microphone from Knowles.

Read this guide to get an overview of the breakout board and how to use it, including its technical specifications, how to hook it up to a microcontroller, and example code to get started!

You'll need these items along with the MEMS Microphone Breakout to follow along with this tutorial. First up, you'll want a microcontroller to power the microphone and monitor its output:

The SparkFun ESP32-S2 WROOM Thing Plus is a highly-integrated, Feather form-factor development board equipped with the 2.4 GH…

Building a circuit using this breakout requires some assembly and soldering. You may already have a few of these items but if not, the tools and hardware below help with that assembly:

The SPH8878LR5H-1 microphone from Knowles Electronics is a bottom port analog microphone that supports both single-ended and differential modes. 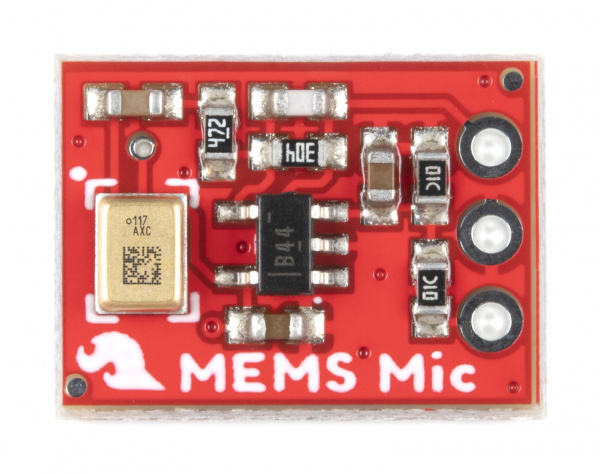 We opted for a single-ended output design on this breakout so it can act as a drop-in replacement for users with previous versions of the SparkFun MEMS microphone breakouts. The Left Out- pin is connected to a test point so savvy users who wish to use this microphone in differential mode can tap into that signal with some careful soldering.

The table below outlines some relevant specifications of the SPH8878LR5H-1. For a complete technical overview of the microphone, refer to the datasheet.

The microphone receives audio input from the bottom of the board. The board breaks out the power pins (VCC and Ground) and the audio output (AUD) from the microphone: 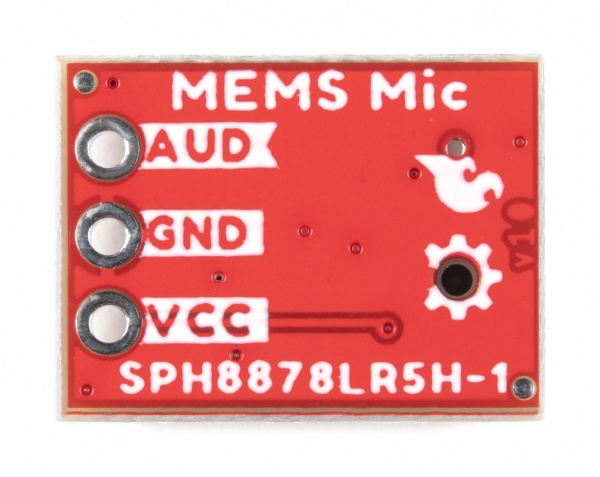 The SparkFun breakout board includes an OPA344 operational amplifier with a gain of *64 and a frequency response range of 7.2Hz-19.7KHz. The amplifier's AUD output floats at one-half VCC when the mic detects no sound. When held at arms length and talked into, the amplifier will produce a peak-to-peak output of just about 200 mV.

Now that we're familiar with the microphone breakout, let's connect it to a microcontroller and monitor some sound!

We recommend using the following colors of wire to easily distinguish the signals but you can always select a different color if you prefer (or do not have the colors used available). 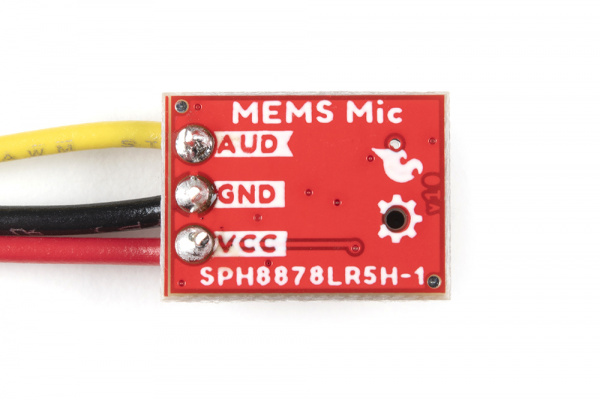 Note: You can use any connection as explained above to connect. If you decide to solder straight header pins, we recommend inserting the straight header pin's tail from the top of the board so that the audio input for the microphone is facing away from a surface. However, depending on your application, you can also insert the pins on the side as well. For a low profile application, you will want to use right angle header pins.

Connecting to a Microcontroller

The completed circuit should look something like the photo below: 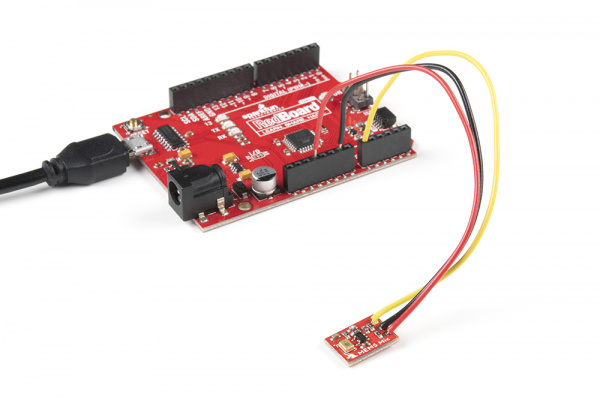 Read on to the next section for Arduino example code to monitor sound volume with the microphone breakout.

Note: If this is your first time using Arduino IDE or board add-on, please review the following tutorials.

The SPH8878LR5H-1 signal output is a varying voltage. When all is quiet, the AUD output floats at one-half the power supply voltage. For example, with a 3.3V power supply, the AUD output will be about 1.65V. In the photo below, the yellow marker on the left side of the oscilloscope screen marks the zero axis for the voltage (aka V = 0). The pulse is the AUD output of a finger snap close to the mic. 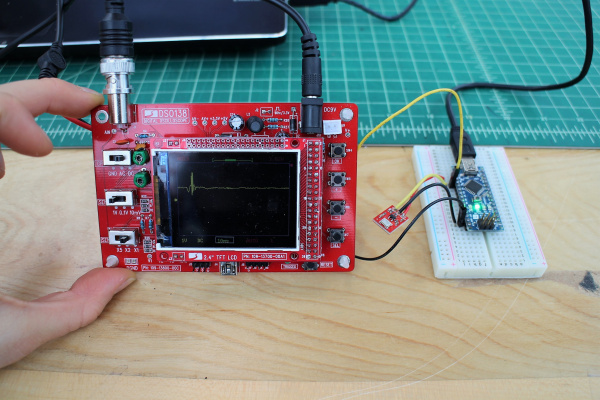 The microcontroller analog (ADC) input converts our audio signal into an integer. The range of possible ADC values depends on which microcontroller you are using. For an Arduino microcontroller with an ATmega328P, the analog resolution is 10-bits. This range is between 0 and 1023, so the resolution of our ADC measurement is 1024. To convert our analog measurement into a voltage, we use the following equation:

In our case, the ADC Resolution is 1024, and the System Voltage 3.3 V. We'll need to add this equation in our code to convert our ADC Reading into a voltage.

But Wait, What Are We Actually Measuring??

For many applications that deal with sound (which is a wave), we're mostly interested in the amplitude of the signal. In general, and for the sake of simplicity, a larger amplitude means a louder sound, and a smaller amplitude means a quieter sound (and the sound wave frequency roughly corresponds to pitch). Knowing the amplitude of our audio signal allows us to build a sound visualizer, a volume unit ("VU") meter, set a volume threshold trigger, and other cool and useful projects!

To find the audio signal amplitude, take a bunch of measurements in a small time frame (e.g. 50 ms, the lowest frequency a human can hear). Find the minimum and maximum readings in this time frame and subtract the two to get the peak-to-peak amplitude. We can leave it at that, or divide the peak-to-peak amplitude by a factor of two to get the wave amplitude. We can use the ADC integer value, or convert this into voltage as described above. 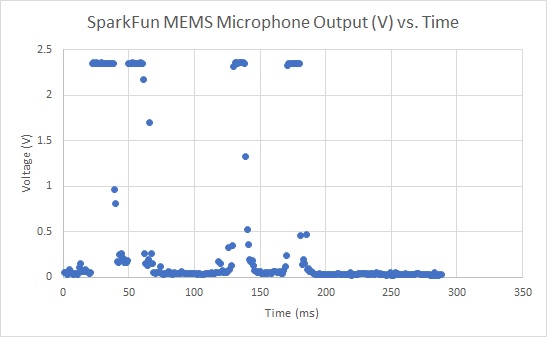 Note: For a simple test to see if your microphone is working, try using the example below! Select your Arduino board, COM port, and hit the upload button.

Below is a simple example sketch to get you started with the MEMS microphone breakout board. You can find the code in the GitHub repo as well. The code, written for an Arduino microcontroller, includes a conversion equation from the ADC Reading to voltage, a function to find the audio signal peak-to-peak amplitude, and a simple VU Meter that outputs to the Arduino Serial Monitor. For a more visual output, you can also use the Serial Plotter.

Be sure to read the comments in the code to understand how it works and to adapt it to fit your needs. Select your Arduino board, COM port, and hit the upload button.

Now that you've connected your MEMS microphone breakout, it's time to incorporate it into your own project! For more information on the board, check out the resources below:

If you run into trouble getting, or understanding, an audio signal output from the MEMS mic breakout board, try using a multimeter and/or an oscilloscope to measure the voltage output of the signal in quiet and loud settings. If you're still stuck, check out our forums and we'll help you troubleshoot.

After you've read in the MEMS microphone and have a good handle on the signal output, you're ready to start using it for practical microphone applications! Here are a few ideas to get you started:

Or check out these other audio related tutorials below.

Make a Step Sequencer using an Arduino, the Auduino firmware, and a handful of hardware.
Favorited Favorite 6

Drum machines and keyboards have been the standard for making digital music, but how do you make electronic music if you're trained to play the trombone? One of our Hackers in Residence, Carlos Mello, took it upon himself to find a solution to that very question.
Favorited Favorite 4

All the information you need to use the Spectacle Light and Sound Kit in one place.
Favorited Favorite 2
Share
Use this URL to share: