SparkFun heads to Washington D.C. to teach soldering, e-textiles and programming at the United States of America Science and Engineering Festival

We want you to join us at the nation's largest Science Fair from Thursday, April 24th through Sunday, April 27th at the Walter E. Washington Convention Center in Washington DC! We'll be hosting special events and workshops on Thursday and Friday as well as soldering, e-sewing and programming workshops on Saturday and Sunday. Stop by! Solder a Simon or sew some LEDs in between checking out the rest of the exhibits.

The first time the United States of America’s Science and Engineering Festival happened in 2010 SparkFun was there, without a booth, but wandering around and watching the largest Science Fair in the nation take its first steps. At the time there was no SparkFun Education Department and our presence was limited to a couple of guys with backpacks wandering around giving away SparkFun Inventor’s Kits. 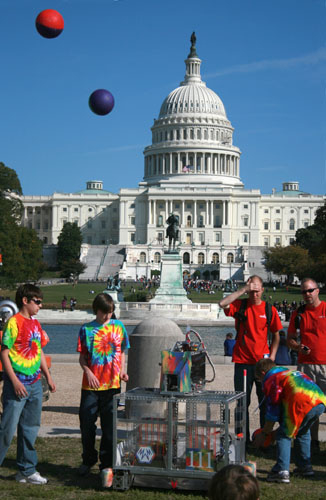 We saw kids running across oobleck, some extremely interesting robots, science cheerleaders and an electric motorcycle that literally transforms into a three wheeled vehicle for slower speeds. The next time USASEF happened was in 2012. SparkFun was lucky enough to partner with RobotFest to teach soldering to somewhere around 750 people in two days. This time we are going back with more than twice as many people to teach a lot more than just soldering! We will be teaching educators how to do drag and drop programming, use C/C++ to program e-textiles, just generally hangout with robots, play with Bluetooth-enabled stuffed animals, high altitude balloons, video games and a bunch of other cool projects on top of returning with our trusty soldering irons and Simon Kits! This was the first year we did workshops at USASEF, this year we'll have more space and even more types of workshops!

This year there will be a bunch of SparkFunions at the Walter E. Washington Convention Center for USASEF ready to teach you how to solder, program or just generally geek out over the course of the event. The workshops on Thursday are for educators in the area and you can sign up for them here and here. The event on Friday is more free-form and open to anyone. We'll be showing off some video games and controllers, an electronic pineapple or two, some teaching stations, a high altitude balloon, Cubelets and, of course, some robots. Our friends at Ten80 will be corralling the robots while we help you explore the other projects and give away some cool electronics. We do ask that you sign up for it here, but feel free to bring a friend or two. (Especially if they are a science, technology, art, engineering or math teacher!) Did I mention that we'll be running some type of a give-away thingie? It's true, very technical.

Saturday and Sunday you'll find us on the USASEF floor in the RobotFest section soldering away and doing occasional workshops. We'll be set up next to our buddies from Parallax, an accelerometer toss away from the Beagle booth. Come by and put together a Big Time, Simon or Weevil Eye. We'll also be putting on workshops about Pico and Scratch at 9:30 AM to 11:00 AM both Saturday and Sunday. On Saturday in the afternoon you can learn how to sew e-textiles with some of our e-textile specialists at 4:00 PM to 5:30 PM. Sunday from 4:00 PM to 5:30 PM we'll be helping people learn how to reprogram their Simons, so if you build a Simon and you're wondering what the next step is you should definitely think about stopping by for our last workshop at USASEF! Each of these workshops is open to 20 - 30 people, depending on seating. Space and seats in the workshop are on a first come - first serve basis. Another satisfied learner ponders the Simon she just put together

So, stop by! Show off the amazing project you've been working on. Let us know your special trick you use when teaching technology, or just grab a soldering iron and some safety glasses before putting together one of our kits! At USASEF you and your kids can see just how fun educators across America have made science, technology, engineering and mathematics.

Guest Post: Invent-abling: Enabling Boys and Girls to Make Together