The SparkFun Triad Spectroscopy Sensor is a powerful optical inspection sensor. Three AS7265x sensors are combined alongside a visible, UV, and IR LEDs to illuminate and test various surfaces for light spectroscopy. 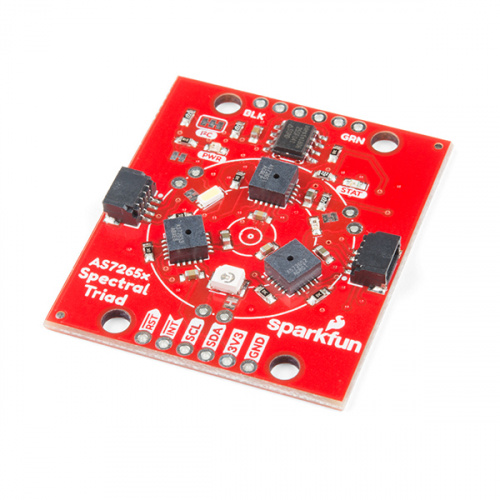 AMS has combined the power of three sensors to cover the measurement of light from 410nm to 940nm in 18 individual bands. 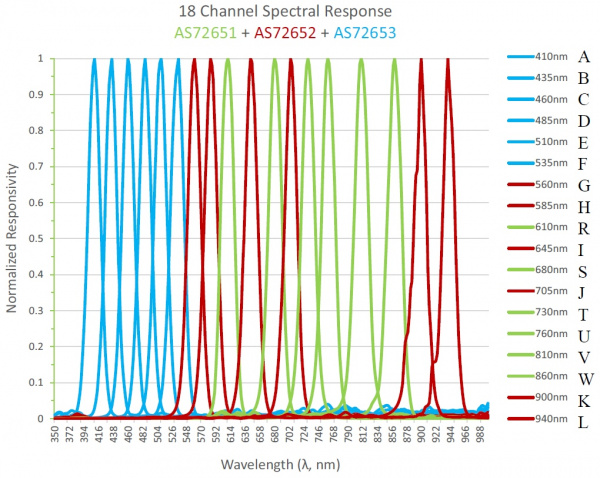 What Can You Do with Light Spectroscopy?

It’s an amazing field of study, and the SparkFun Triad brings what used to be prohibitively expensive equipment to the desktop. The AS7265x should not be confused with highly complex mass spectrometers, but the sensor array does give the user the ability to measure and characterize how different materials absorb and reflect 18 different frequencies of light.

$7.50
8
Favorited Favorite 37
Wish List
Note: If you are looking to reduce the cost and avoid soldering headers to the Qwiic shield, try taking a look at the RedBoard Qwiic. It is essentially a RedBoard with Qwiic connector.

You will also need a Qwiic cable to connect the shield to your AS726X, choose a length that suits your needs.

Depending on your setup, you may need a soldering iron, solder, and general soldering accessories.

Light is a useful tool for the electrical engineer. Understanding how light relates to electronics is a fundamental skill for many projects.
Favorited Favorite 23 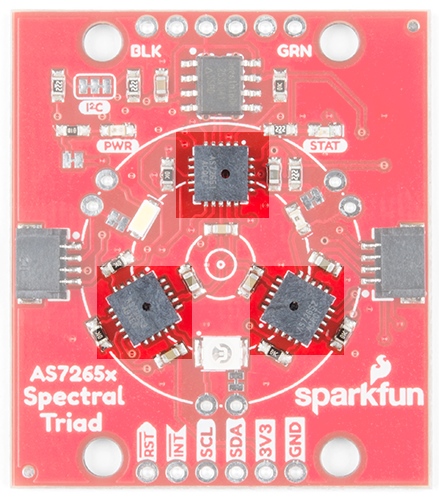 These sensors from AMS are interesting in that they ship without firmware. The firmware to drive the system is loaded onto a 4Mbit EEPROM that is read by the AS72651 at power on. 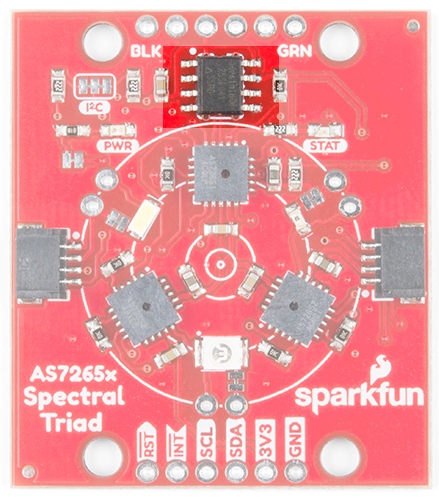 The Triad contains a 5700k white LED, a 405nm UV LED, and a 875nm IR LED mounted alongside the sensors. These LEDs were chosen to illuminate the target with the largest swath of visible and invisible light. The LEDs are individually enabled with software configurable drive current. 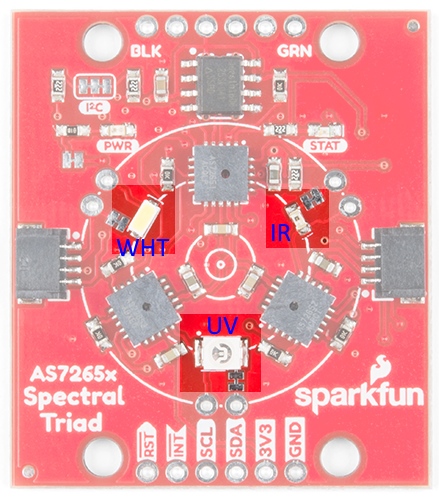 The board also has multiple ways for you to illuminate the object that you are trying to measure for a more accurate spectroscopy reading. If you aren’t satisfied with the on-board, LEDs you can grab your own through hole incandescent bulbs. While you should find a bulb rated for 3.3V, a bulb rated for higher voltage, like 5V, will still work, but will not run as bright as it normally would with 5V. We’ve found that Mouser is a good place to look for these. If you are going to go that route and use your own bulb, be sure to disable the onboard LED by removing cutting the jumper to any 'bulb' footprint that is used. Cut the jumper next to each bulb footprint to disconnect the LED from the controller IC and solder in a bulb. We use the word ‘bulb’ to indicate any DC device (limited to 100mA max) but this signal pin could also be used to activate a larger MOSFET or control device to activate a much larger current device. 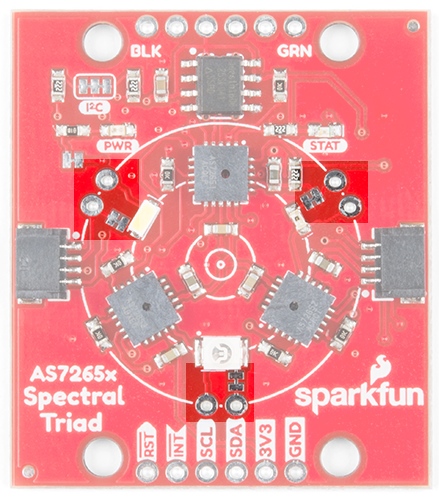 In addition to the illumination LEDs, there is a power LED and a status LED. The blue status LED indicates various states of the AS72651 sensor and can be disabled through the SparkFun library. The red power LED is provided to indicate the board is properly energized. If the red light is interfering with readings it can be disabled by cutting the neighboring jumper. 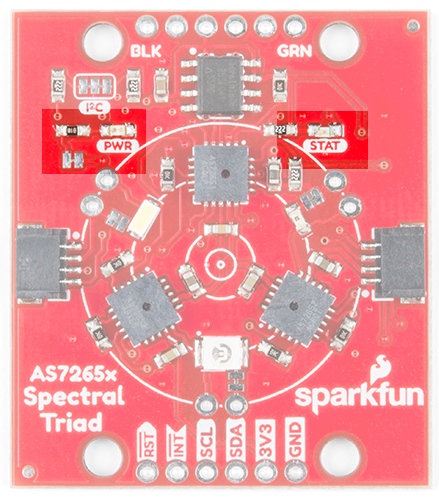 The Qwiic connectors provide a quick and easy way to connect the Triad over I2C. Alternatively, you can solder to the four pins: GND/3.3V/SDA/SCL. The sensors are 3.3V compatible so don’t use with a 5V Arduino Uno without proper conversion (use the Qwiic shield instead!). If you're using a 3.3V development platform that doesn't have a Qwiic connector, consider using the Qwiic Breadboard Cable. 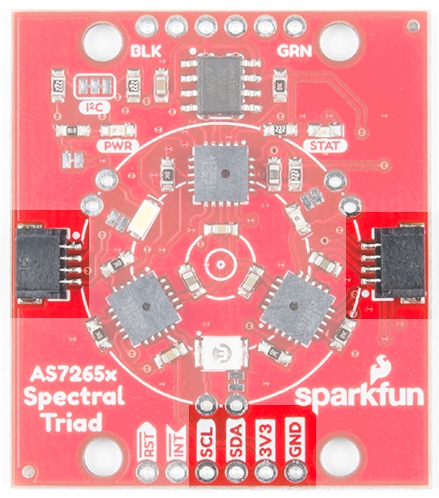 The SparkFun Serial Basic Breakout is an easy-to-use USB-to-Serial adapter based on the CH340G IC from WCH.

This is SparkFun Beefy 3 FTDI Basic Breakout for the FTDI FT231X USB to serial IC. The pinout of this board matches the FTDI …

A serial interface is also available for those users who prefer using AT commands. Please refer to the AS7265x datasheet for a full list of commands. To enable the serial interface (and disable the I2C interface) you must modify two jumpers: 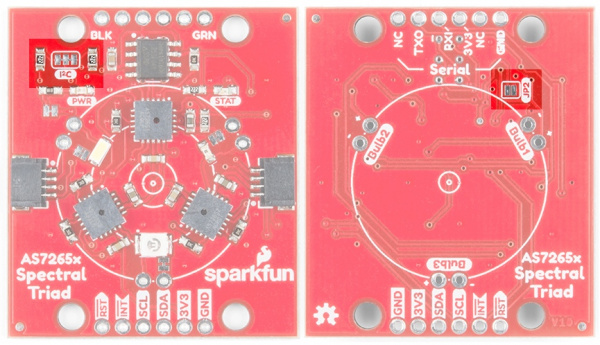 Next, solder in a 6-pin right angle male header to the serial port. 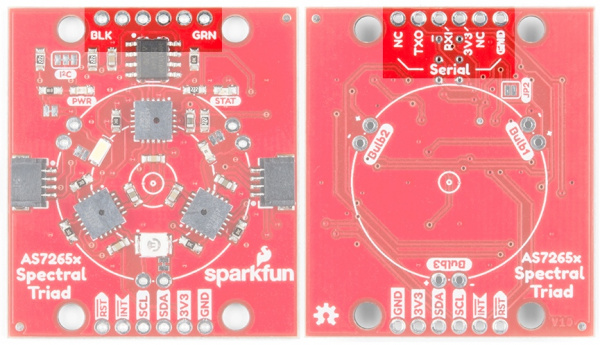 The SparkFun Serial Basic connects directly to the Triad. The Serial Basic is set to 3.3V by default but if you’re using a different board, be sure it provides 3.3V on VCC and uses 3.3V logic signals. 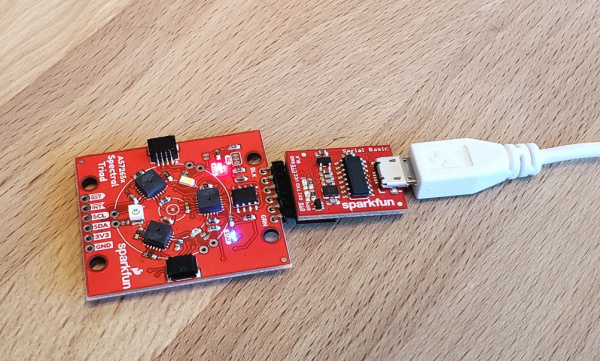 The serial interface operates at 115200. To test the connection, open TeraTerm or your favorite terminal and connect to the Serial Basic. Send the command AT and look for an OK response. You’re all set! Check the AS7265x datasheet for a full list of AT commands. 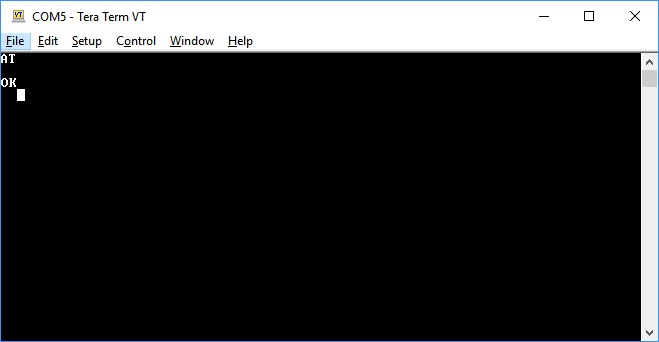 We’ve written an Arduino library to make reading the Triad a breeze. The easiest way to install the library is by searching SparkFun Spectral Triad within the Arduino library manager. You can also manually install the AS7265x library by downloading a zip:

Example 1 provided with the library demonstrates how to read all 18 channels. The higher examples demonstrate all the features available through the SparkFun library on the Spectral Triad:

Let's get the Triad hooked up over Qwiic and begin illuminating a target to take some readings. Using a BlackBoard and a Qwiic Cable we're able to attach to the Triad quickly without soldering. Let's open and use Example 2 from the library so that the Triad will take all 18 readings while illuminating the target.

Once you have a series of readings, plug them into your favorite graph utility. For our purposes, we like to use Google spreadsheets. You can paste the comma delimited output from the sketch directly into a sheet. Once there, drop the small menu down and select Split text to columns.

You can access our data here. The graph of the 18 frequencies is pretty neat! 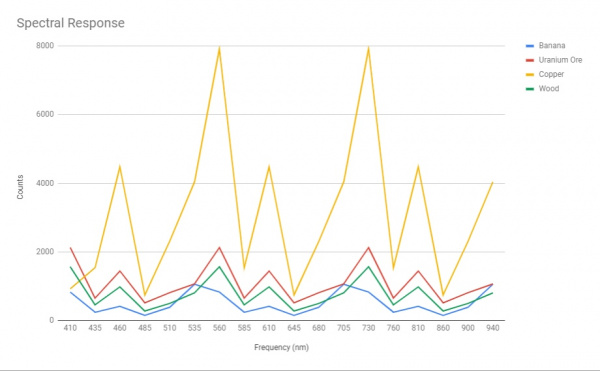 Now that we have a baseline we can take a reading from an unknown thing (in this case, Uranium ore we had sitting around used for testing the Pocket Geiger Counter). Note that the distance to your sample will cause the amplitude of the readings to increase or decrease. We took our readings holding the Triad about 1 inch away from the surface of the target sample but a 3D printed shroud would remove background illumination and remove read distance variations.

As you can see the unknown sample follows closely to the Uranium Ore signature. 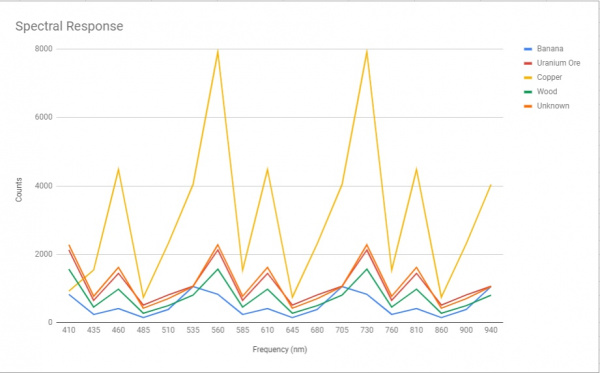 Science! The Triad is a fantastic tool that will have you looking around your house for interesting things to measure.

Now that you've successfully got your Spectral Triad up and running, it's time to incorporate it into your own project!

Freescale’s MMA8452Q is a smart, low-power, three-axis, capacitive micro-machined accelerometer with 12-bits of resolution. It’s perfect for any project that needs to sense orientation or motion. We’ve taken that accelerometer and stuck it on a Qwiic-Enabled breakout board to make interfacing with the tiny, QFN package a bit easier.
Favorited Favorite 4

Get started passively monitoring motion using the Panasonic EKMC and EKMB sensors with the SparkFun Qwiic PIR.
Favorited Favorite 0
Share
Use this URL to share: