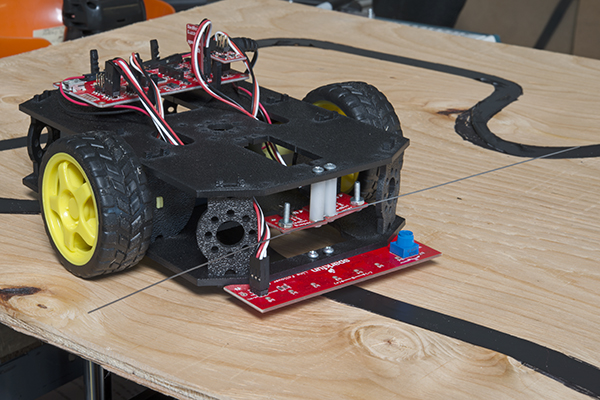 The array PCB has a few pieces to note. 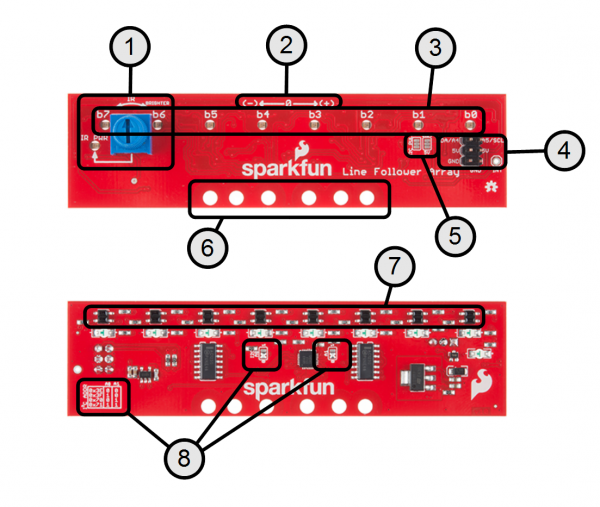 If you need to change the address of the array, move the solder jumper to set A0 and A1. The silkscreen table gives a reference. Seen in the photo, the default address is 0x3E. For example, if you want to use address 0x70, move A1 to the '1' position and leave A0 at '0'.

The I2C bus of the array is pulled up to 3.3V by default. This should work for 3.3V and 5V boards, but if you need to change it explicitly to 5V, cut the copper bridge and add a solder jumper to the "5V" side. The other jumper is included if you need to disconnect the I2C bus from the pull-ups entirely. This will only be used in specific situations, for instance if the microcontroller side has strong pull-ups and the array's resistors need to be disabled.

Assembly is super easy! Make the following connections with your microcontroller.

* Note: INT pin is not required but can be connected to any input if the interrupt functionality is programmed into the SX1509 expander. 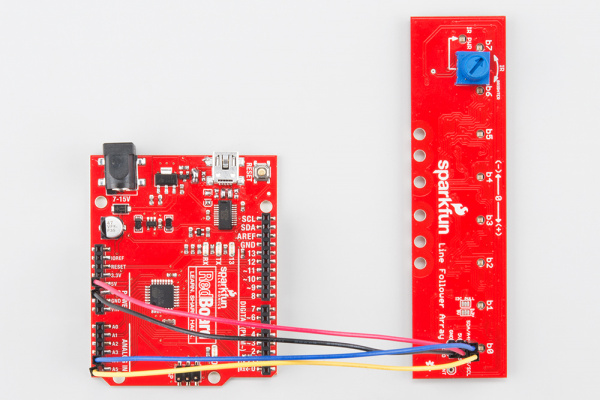 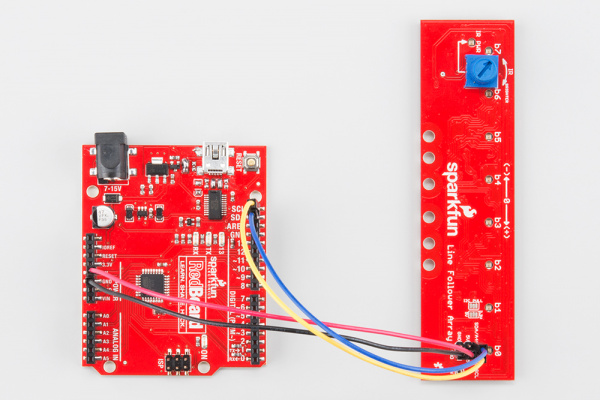 Using I2C via the dedicated SDA and SCL pins. 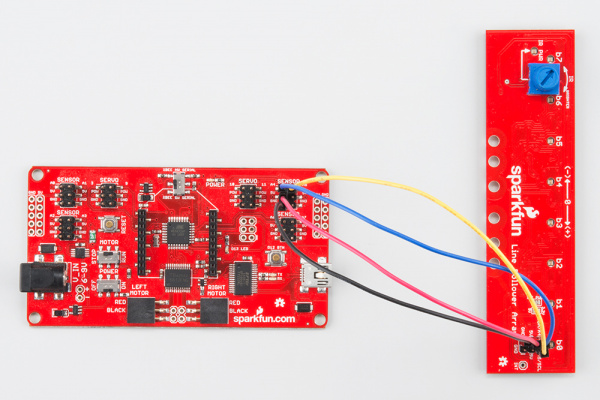 Connections are pin compatible with the RedBot Mainboard.

Mechanical Attachment to a Shadow Chassis

Attaching to the Shadow Chassis happens through the slot where the original three line following sensors were placed. Put 4-40 hardware through the array and hold with a finger. Hold the bolts through the slot in the shadow chassis, thumb on the 4-40 nuts, then make the electrical connections. 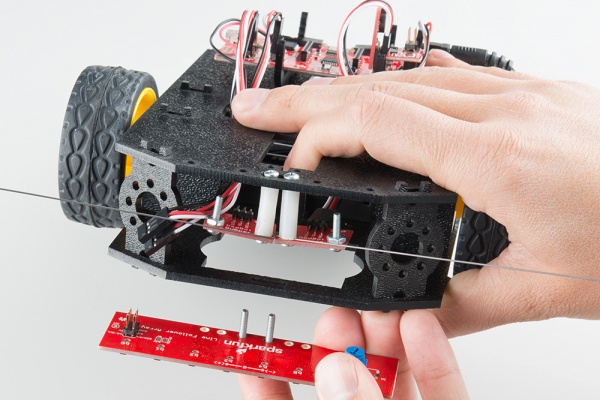 Hold the bolts in place with a finger 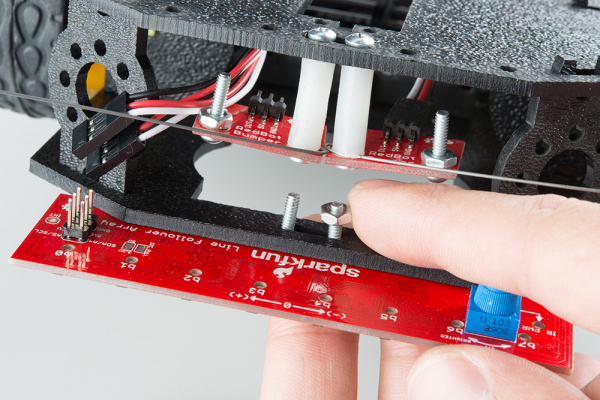 Thumb on the attaching nuts, then torque by hand or with a screwdriver 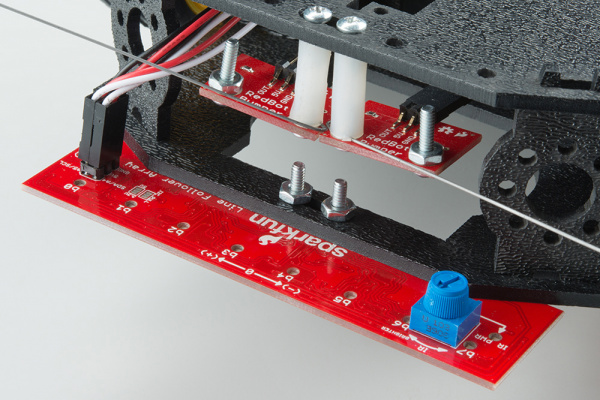 The sensor bar is basically an I2C expander with sensors, but to simplify implementation we've created a set of drivers to collect the data in a convenient way. Visit the GitHub repository to download the most recent version of the library, or click the link below:

For help installing the library, check out our How To Install An Arduino Library tutorial. You'll need to move the SparkFun_Line_Follower_Array_Arduino_Library folder into a libraries folder within your Arduino sketchbook.

The default values set by this sketch should work for a fresh, out-of-the-box sensor. Set the baud rate to 9600, and run the sketch. You should see the Arduino output data every second in a few different formats. If the sketch only says that the IC communication failed, double check your wiring connections.

The knob on the sensor array is used to set the brightness of the IR LEDs. Because silly humans can't see IR, the "IR PWR" LED is provided to give feedback for how bright the LEDs are operating, and to indicate that the regulator is functioning. This indicates what the brightness will be even if the IR illuminators are disabled in firmware.

Remember: Brighter is not always better. Calibrate your robot in the field before running.

Follow these three steps to configure the IR brightness.

Step 1: Turn the brightness down until light areas stop picking up. 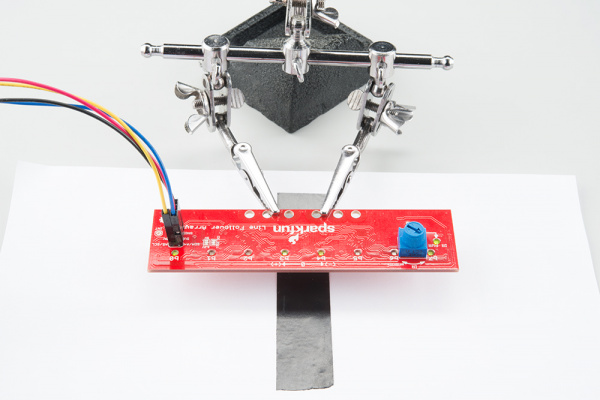 Vision indicators will show above light areas when the shouldn't. Notice B7 and B0 have illuminated.

Step 2: Turn the brightness up until dark areas start falsely picking up. 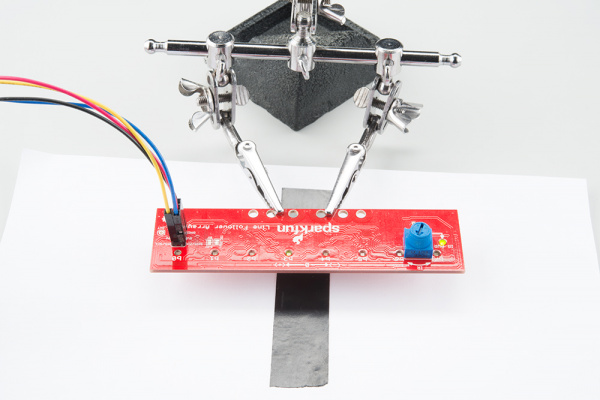 Vision indicators above dark areas will stop showing. Notice B3 has stopped illuminating

Step 3: Set the brightness somewhere between those two points. 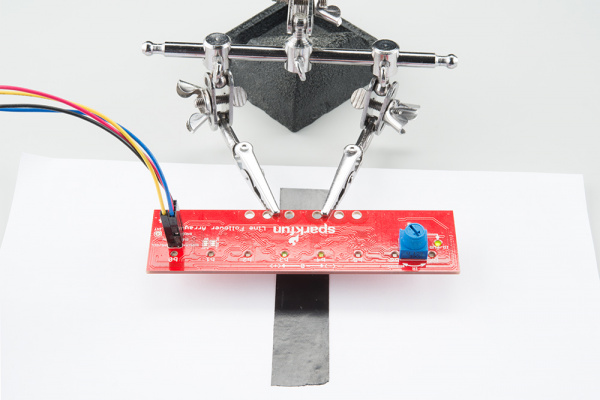 B3 and B4 are illuminated over the line and knob's arrow now shows a setting between the two limits. It's ready to follow!

Core Functions of the Arduino Library

The basic library has the following parts

Each instance of the SensorBar library needs to be constructed in the global scope for all to access.

For the default address of 0x3E:

Use begin to start the sensor bar's I2C expander. This use Wire.h under the hood.

returns 1 if it was able to communicate with the sensor bar or 0 if it had troubles. In the example ReadBarOnly the sketch is held if the sensor did not respond.

After .begin(); has been run, the sensor bar is ready to start reading data. Place it in the setup() section to run once.

Get a reading from the array as a single 8 bit word where each bit represents an IR sensor. If the sensor's lights show: ON, ON, ON, ON, OFF, ON, ON, ON, this function will return 0xF7 matching the bit positions on the silkscreen. If InvertBits has been set though, the result will be 0x08.

Notice that the silkscreen labels b7 through b0 represent the same bits of this raw data.

Returns the states of the IR detectors, as bits of a byte (unsigned 8 bit).

Get the states and place in the temporary variable rawValue

Note that if InvertBits does not match the line/field colors, the result of getPosition() will not have meaning. This is because multiple detected positions get averaged to come up with a vector, and an inverted setting means basically all the positions are detected and average near zero (center).

Use to get the number of sensors that are detecting a line.

This is useful for detecting validity of the perceived line or to detect stop conditions, such as if the robot has been picked up.

Use to turn on and off the bar's IR strobing to save power.

Note: If BarStrobe is set, the feedback indicators only show the value during the time the robot is actively reading the line, but it can save a bunch of power.

Also note that a read operation takes 2-3x longer with BarStrobe set, as the library has to enable and disable the LEDs. If extremely rapid reads are required, clear the BarStrobe.

Note: The bar's vision indicators are NOT reversed by this function, only how the library uses the data.

The arduino library actually contains two classes. The first (discussed above) does all the reading and configuration of the actual sensor. The second is a data structure for creating and holding a buffer of data.

The structure is a circular buffer where, when full, new data overwrites the oldest data and all access to the data is referenced from the newest piece of data.

Construct the buffer objects in the global scope.

Pass the maximum size of the buffer to create. Argument is type unsigned 16 bit integer, but size must be limited to the size of memory available.

Read the data in the buffer at some depth from newest.

Pass the element number to get as unsigned 16 bit integer. The newest element is referenced as 0.

Add a new piece of data to the buffer.

Pass the value to push into the buffer as signed 16 bit integer.

Average some number of the most recent entries.

Pass number of elements to average as unsigned 16 bit integer.

The mathematical average of the newest elements as signed 16 bit integer.

Number of elements currently in the buffer.

When working with a partially filled buffer, this will report how many entries have been pushed in. When the buffer is full, this reports the total size of the buffer.

This example exists to show all the forms of data collection that can be done with the library.

To use the sketch, select it from the 'examples' menu and load it onto an Uno compatible board. Open a serial terminal at 9600 baud and text of the raw data, position, and density should appear. Otherwise, it will proclaim that the communication has failed. 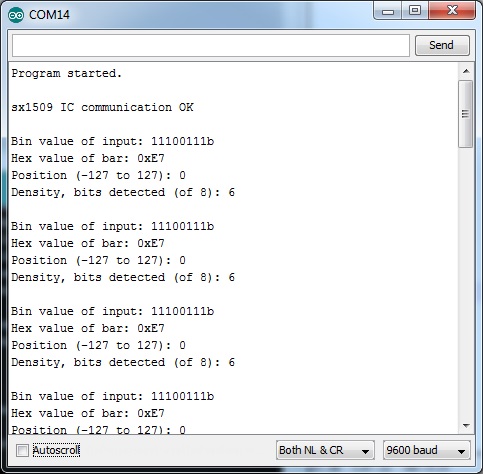 A properly running sketch reporting that the line is centered 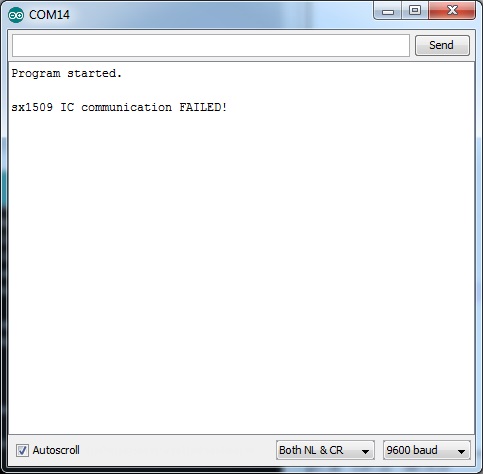 If the sensor did not connect properly, the example will let you know

This is an demonstration of line following capabilities using the RedBot mainboard and either chassis. It was designed for a dark line of about 3/4 inch width (spray paint or electrical tape) on a light background.

The sketch can navigate curved corners but not 90 degree corners! It's up to you to find a way to make it navigate. Also, this was designed to stop if the line is lost. There must be a way to seek partial line segments...

This example is being used in our demo video.

This sketch has a little state machine inside that reads the line, then goes to a state that calls drive functions, depending on some condition. It was designed to be simple on purpose. It's up to you to make a better system!

The basic state machine inside the sketch.

This blog post State Machines: blink.ino learns to snooze may help if you need a refresher on state machines.

This sketch was written to demonstrate how to get a pseudo-high resolution output from the array. Load the sketch and open a serial terminal at 115200 baud. The '*' is drawn on a scale as a rolling average filter of the getPosition() data.

It also allows you to look back in time to see what the robot previously went over. 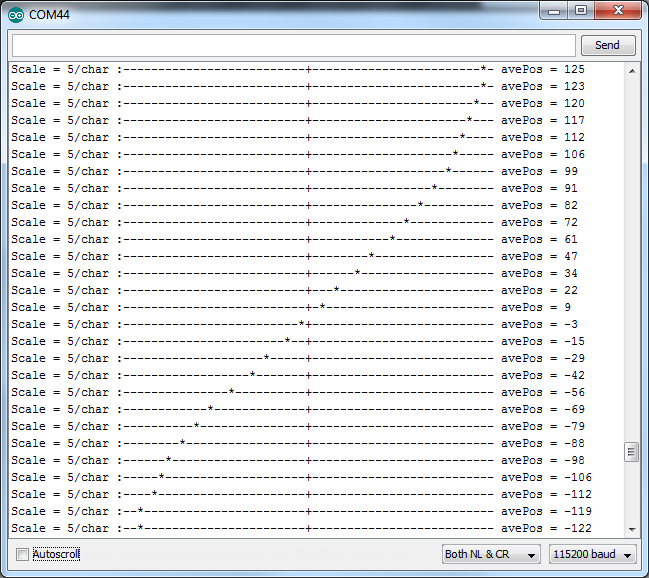 Output of the AveragingReadBarOnly sketch while the sensor was swept over a line. Notice the averaging has produced a output that has a resolution higher than the physical sensor resolution.

This works by creating a circular buffer which stores fresh getPosition() data at a regular intervals, and by averaging the newest 10 entries in the buffer.

The buffer class is included as an extra with the library. See The Circular Buffer section.