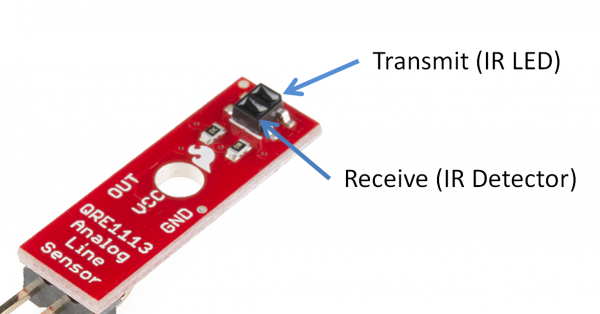 The IR Reflectance sensors work best when they are close to the surface below the RedBot. Using the 1-3/8" stand-offs, the sensor should be about 1/8" above the table. This is an optimal distance for the IR transmitter to illuminate the surface below and measure the reflected light. (Note: Human eyes are non sensitive to IR light, but if you use a CCD camera -- like the one in your phone -- you can see a small light shining out of the front element)

Here, you can see a faint pink glow from the IR LED. This is picked up on most digital cameras and cell phones.

This example simply reads and prints the value of the three IR Sensors. Test out different scenarios to characterize the behavior of the IR sensor.

Upload this example code to the RedBot. **Go to File > Examples > RedBot_Experiments > Exp6_LineFollowing_IRSensors ** or copy and paste the example code below. After the code has successfully uploaded, open up the Serial Monitor to view the readings from the sensors.

After uploading this example, leaving the RedBot connected to your computer, set it down on a piece of paper with a dark line (at least 1/2" wide). You may use a Sharpie Marker, electrical tape, or dark paint. Open up the Serial Monitor to see the data and sensor readings by the RedBot.

The IR Reflectance sensors operate in a pretty short range. They are optimal between 1/8" and 3/16" from the surface. Test this out with your own RedBot.

We can now use these values to program our robot to do things like stay on a table or follow a dark line.

The RedBot won't do anything on its own with this example. It does, however, report back the sensor readings to the Serial Monitor in Arduino. Click on the Magnifying glass in the upper-right corner to open the Serial Monitor, and watch the values of the line followers change in different situations.

The IR Reflectance sensor is essentially an IR LED and an IR detector. It works by transmitting a beam of IR light downward toward the surface. If the detector is over a white surface, the reflected light is received by the detector and outputs a LOW signal. When the sensor is over a black surface where the light is absorbed or not reflected, the IR detector outputs a HIGH signal. The IR Sensor module provides an analog value from 0 - 1023 inversely dependent to the amount of reflected IR light.

The analog values read into the Arduino environment vary from 0 to 1023 because Arduino uses a 10-bit Analog-to-Digital Converter (ADC). A value of 0 corresponds to 0 Volts, and 1023 corresponds to 5V read in by the sensor.

There are a few special characters that can be printed out. These follow all of the standard conventions used in C and C++. A few handy ones include:

Library support for the line sensor is included in the main RedBot library. The line following sensors will be attached to pins A3, A6, and A7. We will create three objects for each of the three sensors with the following lines of code:

The RedBotSensor class has only one method of interest to us. It is xxxxxx.read(); This method returns a value from 0 to 1023 based on the input voltage of the sensor. Remember that the xxxxxx represents the name of the object -- In this case, IRSensor1, IRSensor2, or IRSensor3.

Modify the code to make the RedBot drive around and stop before it crosses a black line.

Use the xxxxxx.read() method to check the values and then write some code that will stop the robot if the level of one of the sensors changes more than a certain amount.

Let's take a look at a few basic scenarios.

Play around with these basic ideas to see if you can program your RedBot to:

Nothing is printing in the serial monitor!

I don't see any change in my sensor values, no matter what I do! 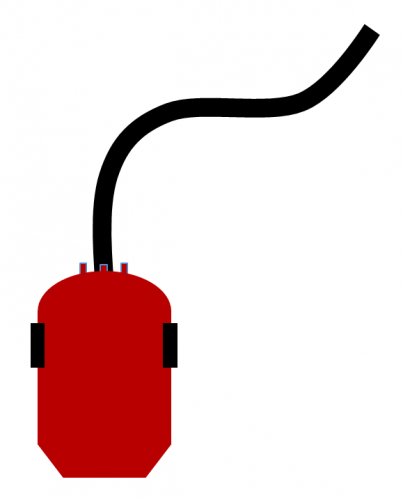 This example really only works when the RedBot is moving slowly, and it doesn't always handle sharp turns well. What can you do to make this example work better?