The Edge uses the Apollo3 Blue - the cutting-edge of high efficiency microcontrollers. This small BGA package packs quite a punch! 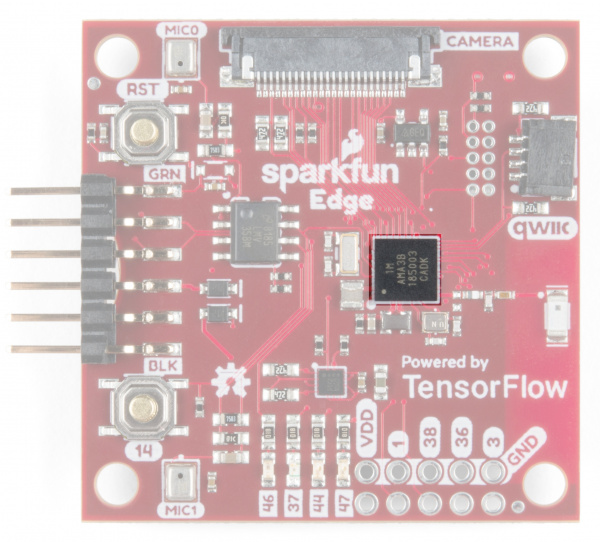 Such a formidable microcontroller would be wasted without a suite of cool sensors to use with it - that's why we've included two microphones, a 3-axis accelerometer, and a camera connector.

The Edge board contains Micro Electro-Mechanical microphones that are hooked up to an operational amplifier with 75x gain to make the best use of the Apollo3's built-in 14-bit analog to digital converter.

The Apollo3 microcontroller can use Direct Memory Access to take audio recordings without using processor cycles - that means you can process audio while you record the next sample! 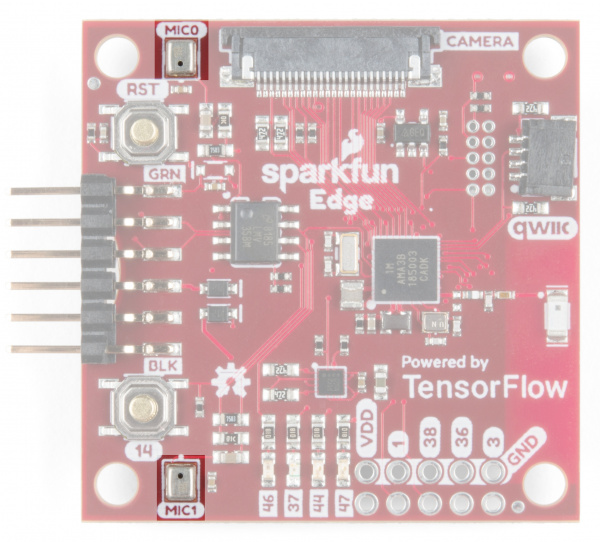 Dynamic interaction with the Edge is included right out of the gate with the onboard ST Microelectronics LIS2DH12 3-axis accelerometer. The accelerometer is on its very own dedicated I2C bus so there's no need to worry about address conflicts. 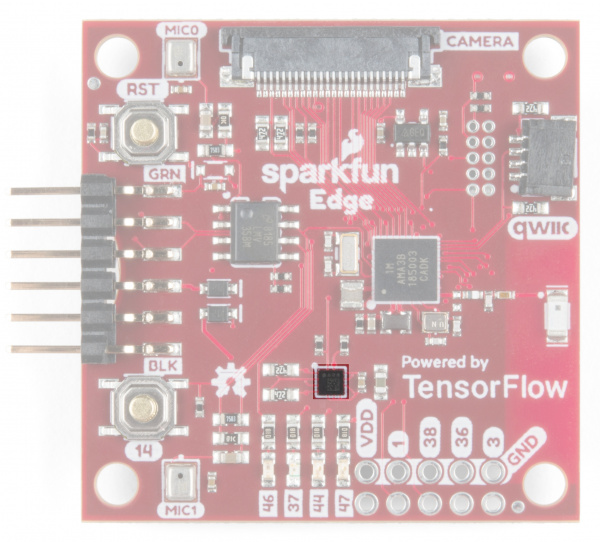 At the top of the board, we've included a camera connector to connect the Himax CMOS imaging camera. 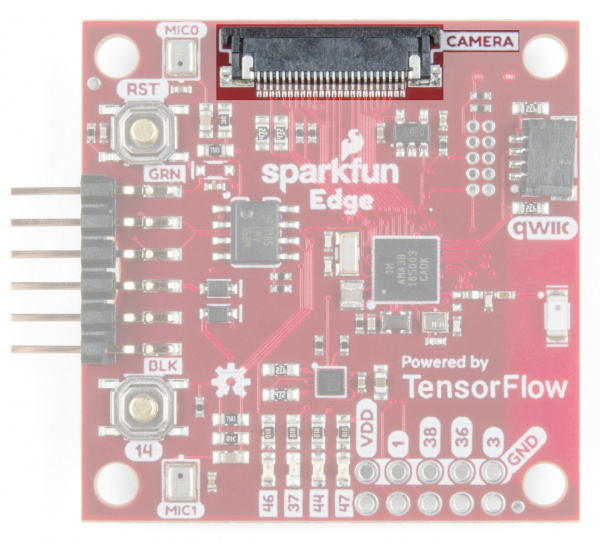 If you need anything else to complete your application there are plenty of ways to connect to the Edge board. Among these are the FTDI UART header, a Qwiic connector, four GPIO pins, four LEDs, and last (but not least) a CR2032 coin cell holder.

You'll use this connector to program the Edge board, but after that you can also use it to talk to other systems that use a UART interface such as GPS or Serial LCD. 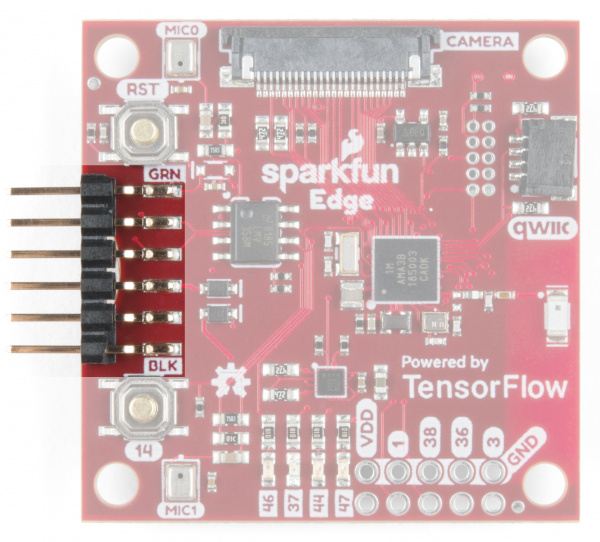 If you connect via UART, you'll likely use the CH340E driver. The driver should automatically install on most operating systems. However, there is a wide range of operating systems out there. You may need to install drivers the first time you connect the chip to your computer's USB port or when there are operating system updates. For more information, check out our How to Install CH340 Drivers Tutorial.

The Apollo3 can have up to 6 independent I2C ports. We've taken advantage of that fact by exposing a fresh I2C port through a Qwiic connector, allowing you to add a chain of I2C sensors without soldering. 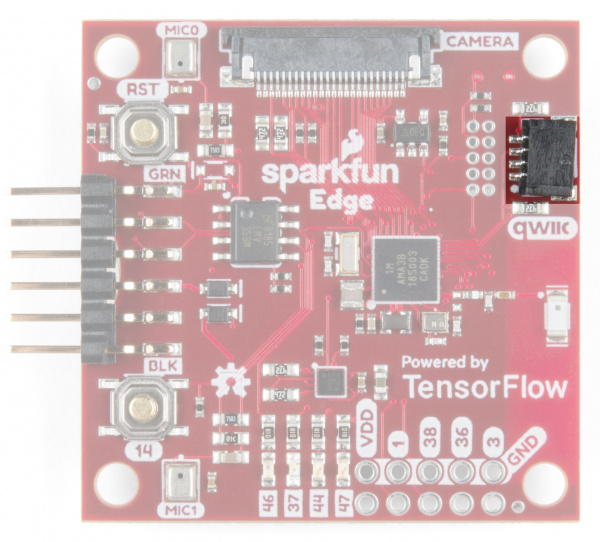 The Apollo3 comes with hardware support for a Bluetooth Low-Energy (BLE) radio. The Edge board pairs that up with a surface mount antenna. The BLE controller and host can be configured to support up to eight simultaneous connections -- security and extended packet length are also supported. 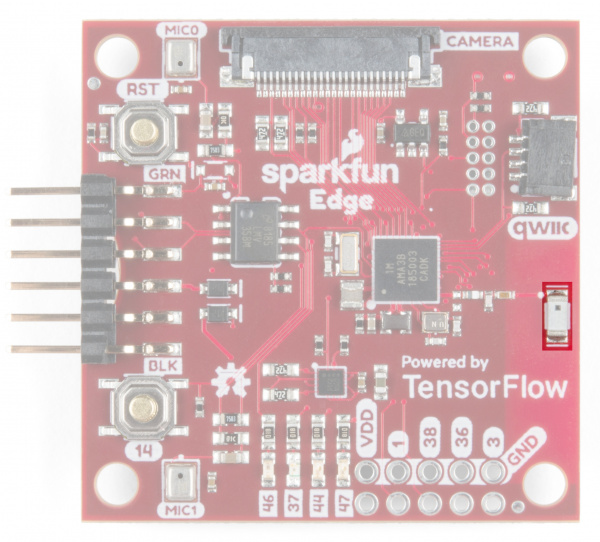 If all that wasn't enough there were still more pins available on the Apollo3, so we broke them out to four LEDs and four GPIO connections along the bottom edge. These are good for addition additional simple input or output capabilities to a project. 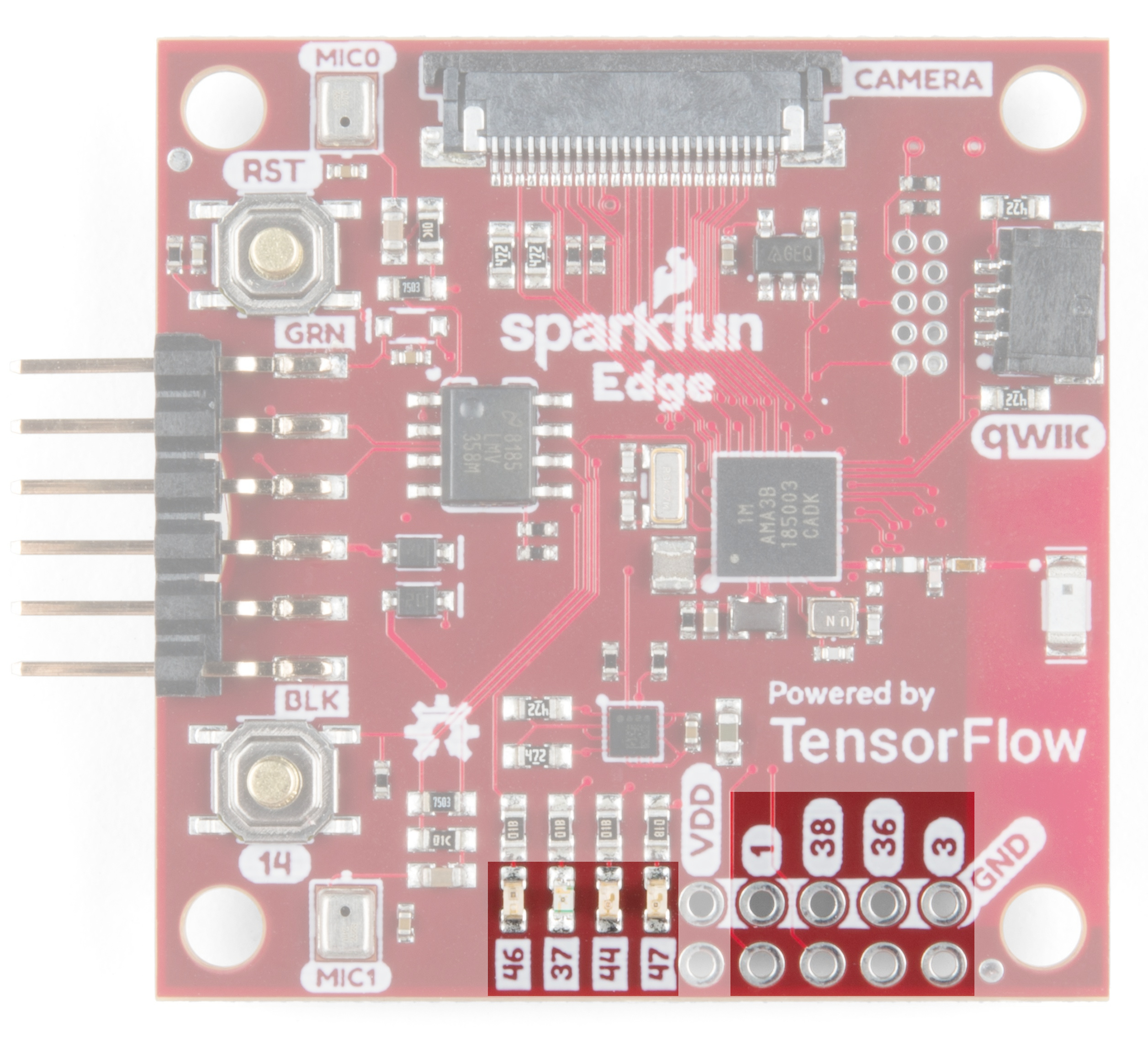 To demonstrate just how efficient this microcontroller is we included a coin cell battery holder on the bottom. That means that once your application is all ready you can take it to school on a key-chain and show it off to your best friend! 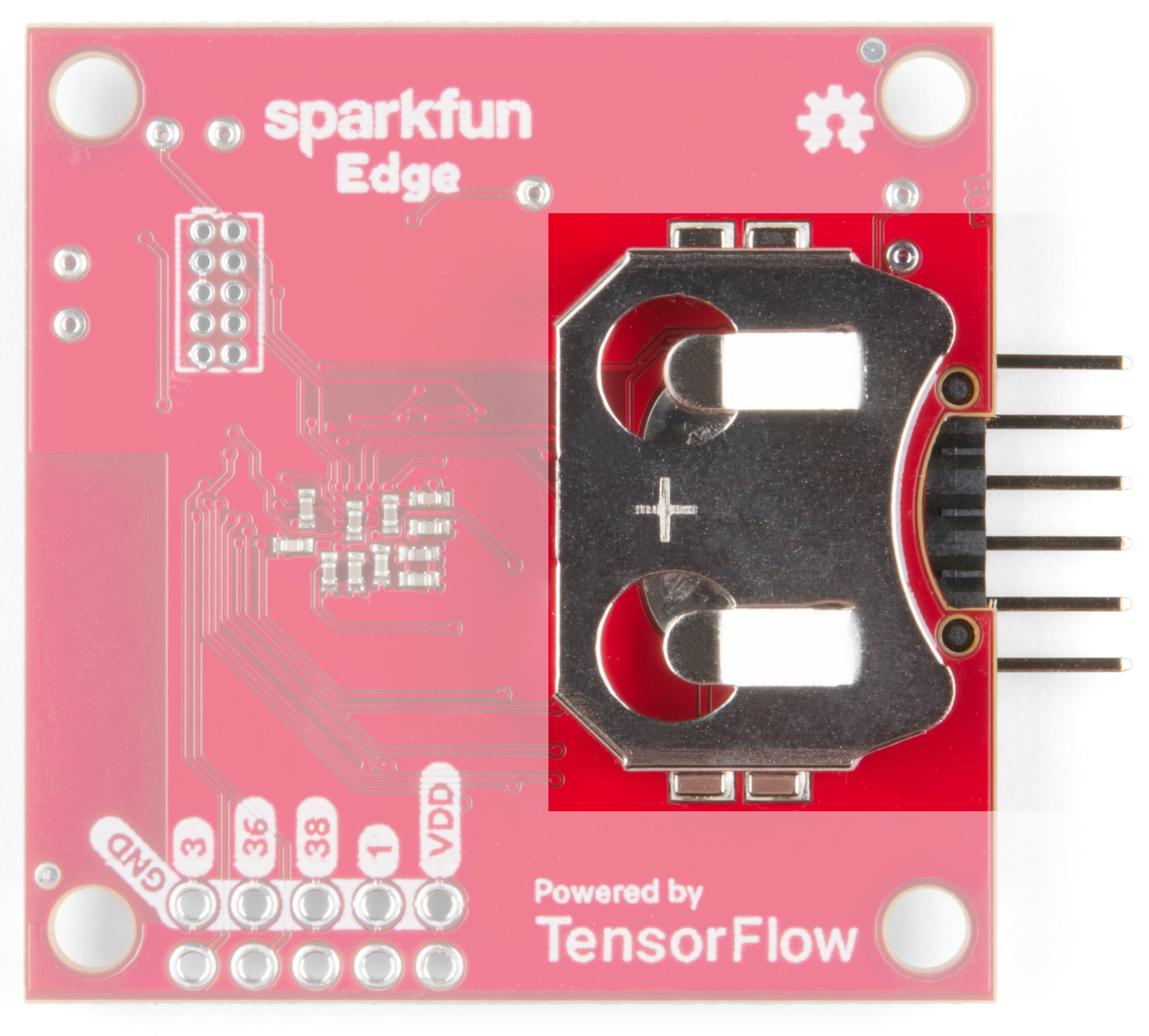 For anyone who wants the utmost performance out of the Edge board during the development process you can use the JTAG MIPI 10 standard 1.27mm pitch 2x5 connector to hook up your debugger/programmer.

Heads up! You should connect your JTAG programmer/debugger from the bottom (coin-cell) side of the board. Look for a small white bar in silkscreen that indicates pin 1 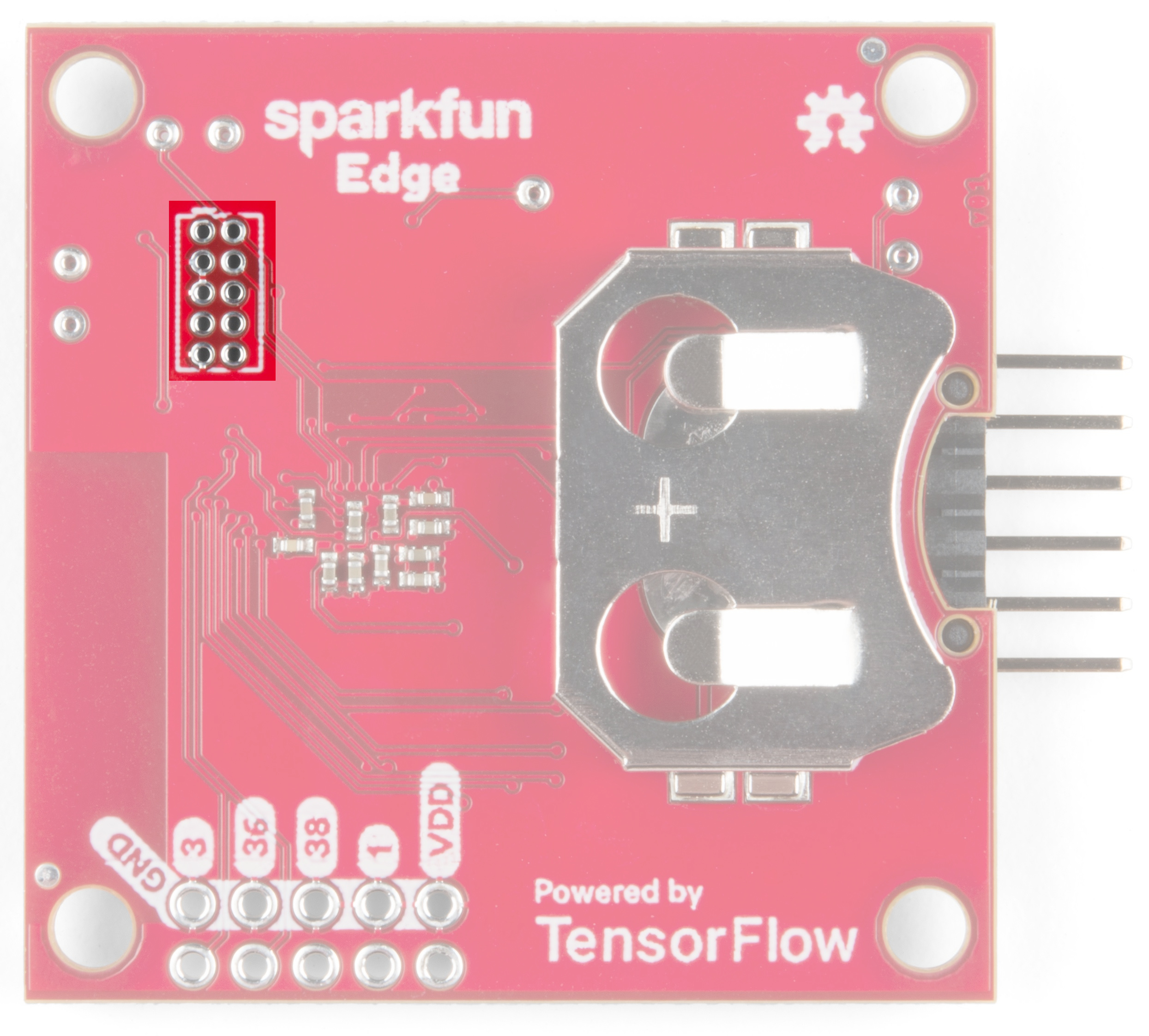 SparkFun Edge development board is measures 1.80"x1.57" and includes has four mounting holes 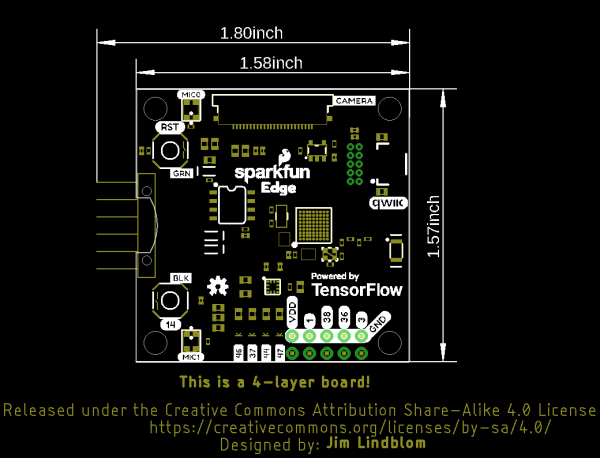