In the previous tutorial, we showed you how to calculate the location of a sound using the new SparkX Qwiic Sound Trigger and the u-blox ZED-F9P GNSS receiver.

The Qwiic Sound Trigger is based on the VM1010 from Vesper Technologies and the TI PCA9536 GPIO expander. The VM1010 is a …

The Qwiic Sound Trigger can be used on its own, or as part of your Qwiic system. It is based on the VM1010 from Vesper Technologies and the TI PCA9536 GPIO expander. The VM1010 is a clever little device which can be placed into a very low power "Wake On Sound" mode. When it detects a sound, it wakes up and pulls its TRIG (DOUT) pin high. The VM1010 can then be placed into "Normal" mode by pulling the MODE pin low; it then functions as a regular microphone. The analog microphone signal is available on the AUDIO (VOUT) pin. All of this happens really quickly, within 50 microseconds (much faster than a capacitive MEMS microphone), so you don't miss the start of the audio signal. This makes it ideal for use as a sound trigger!

The u-blox ZED-F9P GNSS receiver is an old friend. It is a top-of-the-line module for high accuracy GNSS location solutions including RTK that is capable of 10mm, three-dimensional accuracy. With this board, you will be able to know where your (or any object's) X, Y, and Z location is within roughly the width of your fingernail! Something that doesn’t get discussed as much as it should is that the ZED-F9P can also capture the timing of a signal on its INT pin with nanosecond resolution! It does that through a UBX message called TIM_TM2.

In this tutorial, we take this to the next dimension. Quite literally! Last time, we used two sound trigger systems to calculate where a sound came from along the line from one trigger to the other. That’s a one-dimensional (1D) system. If we add a third sound trigger, we can triangulate the location of a sound in two dimensions (2D) allowing us to plot the position in X and Y or East and North!

Last time, we learned that we can calculate the location of a sound by measuring the difference in the sound’s time-of-arrival at two sound triggers. In our 1D example, we:

In 2D, there is a little more math involved. Let’s call our three sound trigger systems A, B and C. A is our reference or origin. If we position trigger B due East from A, we can call the line that joins A to B our X axis. Remember when you used to draw graphs in math class? You had the origin in the bottom left corner of your graph paper and you drew the X axis horizontally out to the right. We are doing the same thing here. Trigger A is our origin at X = 0 and Y = 0. We write that as (0,0). If Trigger B is 8 metres (8m) away from A, then its location is X = 8 and Y = 0. We write that as (8,0).

So far, so good. Now, where should we position trigger C? In reality, it doesn’t really matter. We could position C so that ABC forms a perfect equilateral triangle (a triangle where all three sides are the same length). That would give us the best coverage of the area. But the coordinates of C would be (4,6.93). Not pleasant. 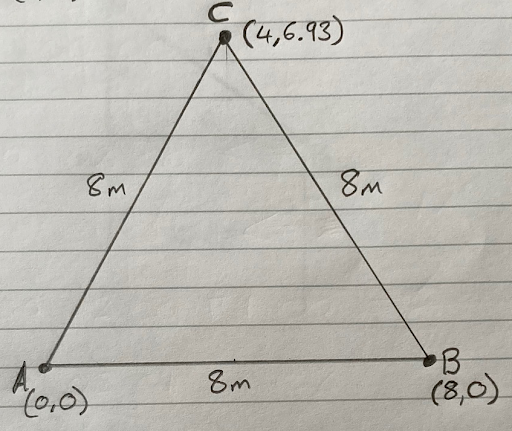 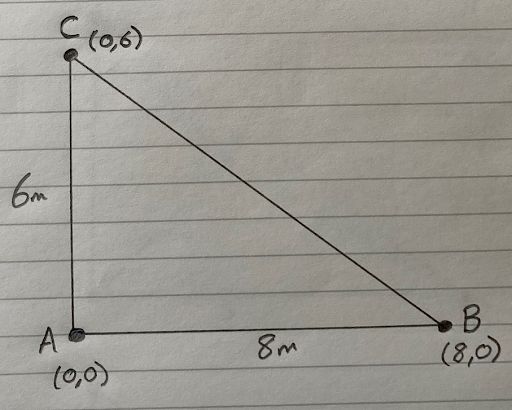 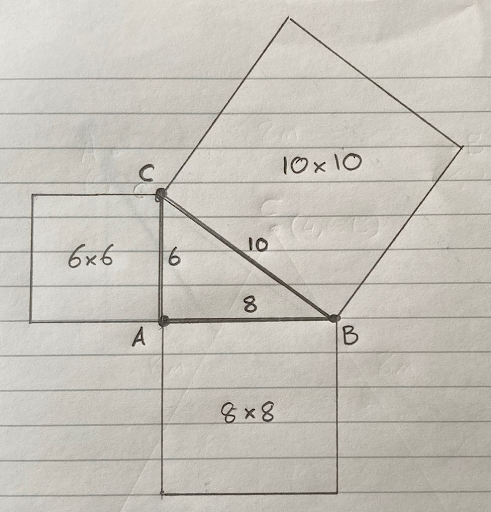 Now, let’s suppose our sound trigger system is running and it detects a sound:

Let’s calculate the differences in those times:

What we do not know is how far the sound travelled to get to A. That’s the first thing we need to calculate.

If we sketch that - not to scale - it looks like this: 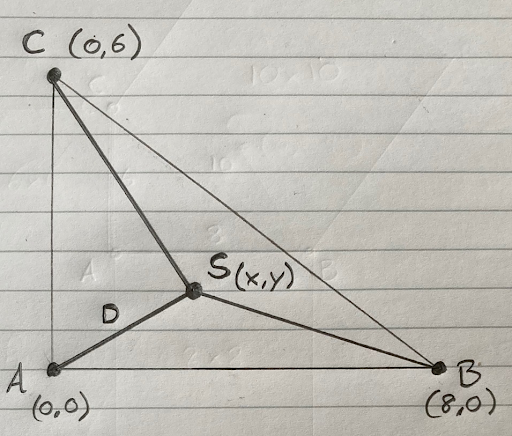 If we divide our diagram up into more triangles: 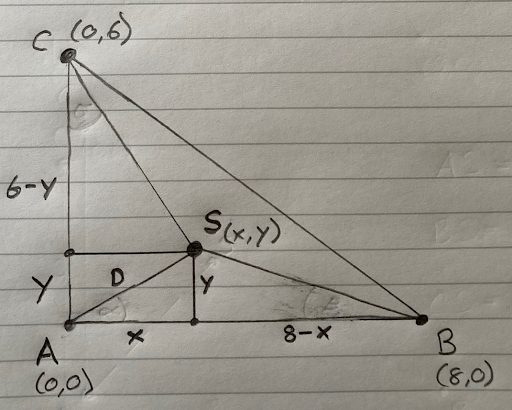 We can use Pythagoras’ Theorem to calculate the distances we need:

We can write that as:

We need to solve for D. To begin, let’s substitute the value for y2 from the second equation into the first equation:

If we remove the brackets:

The D2 cancel out and so do the x2 leaving:

If we divide through by 16 we are left with:

Now let’s go back to our three triangles:

This time, let’s substitute the value for x2 from the third equation into the first equation:

If we remove the brackets:

Again, the D2 cancel out and so do the y2 leaving:

If we divide through by 12 we are left with:

Now we can put our values for x and y back into our first equation:

Multiplying out the brackets, we get:

Now, I’m sure you will remember quadratic equations from your math class too? We can solve for D using the equation:

Inserting our values, D is:

We can ignore the negative value since it is not within our triangle. Now we know that D is 3.605550m !

Looking back at our equations for x and y:

If we insert the value for D, we can finally calculate the x and y coordinates of S:

This technique can be used on any configuration of trigger locations. They don’t have to be positioned in a neat right angle triangle. If you would like proof of that and would like to see the math to solve it, have a look at the section called Here There Be Dragons!

Thanks for sticking with us. The good news is that we’ve written more Python code to do that math for you!

The GitHub Hardware Repo contains two examples for the Sound Trigger. You can run these in the Arduino IDE. The second example is the crowd pleaser! It runs on the MicroMod Data Logging Carrier Board together with the Artemis Processor Board but it should work just fine with any of our processor boards. It communicates with our ZED-F9P Breakout and the Qwiic Sound Trigger to capture sound events and log them to SD card as u-blox UBX TIM_TM2 messages.

Once you have your three sound event UBX TIM_TM2 files, our Sound_Trigger_Analyzer_2D.py will process the files for you and calculate the location of the sound events!

Run the Python code by calling:

The Python code will calculate and display the (x,y) coordinates of any valid sound events it finds. The coordinate system uses the location of A as the origin, and the line running from A to B as the X axis. The Y axis is (of course) 90 degrees counterclockwise from X.

The calculation code assumes that the X coordinate of C is between A and B. If C lies to the left of A, or the right of B, then you need to rename your points. If C is to the left of A, then B becomes A, C becomes B, and A becomes C:

Here There Be Dragons!

Let’s suppose our three sound triggers are arranged such that they form a triangle ABC: 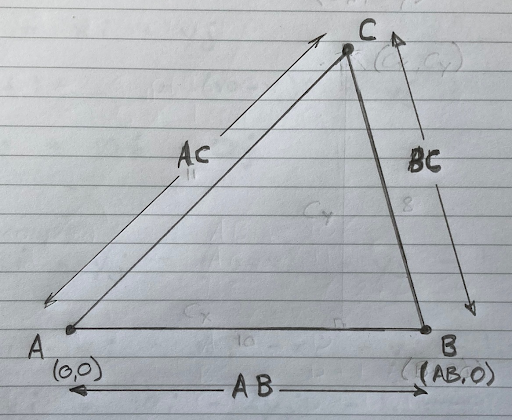 We know the length of the sides: AB, AC and BC.

If we draw a line from C so it meets line A-B at right angles: 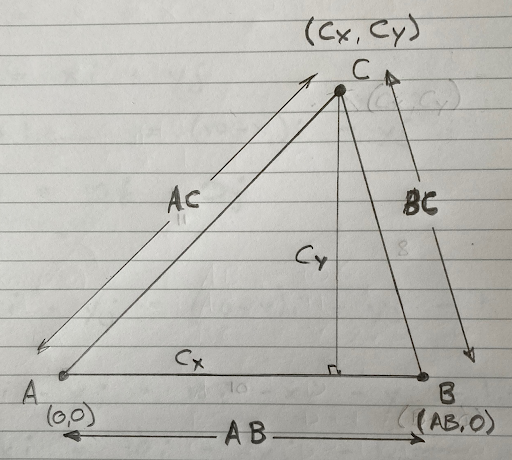 Pythagoras’ Theorem tells us that:

If we rearrange those equations, bringing CY2 to the left and multiplying out the brackets, we get:

Because those two equations are equal, we can arrange them as:

The two -CX2 cancel out. Rearranging, we get:

We can find CY by inserting the value for CX into one of our earlier equations:

Now, let’s suppose our sound trigger system is running and it detects a sound. Let’s call the location of the sound S and give it coordinates ( SX , SY ): 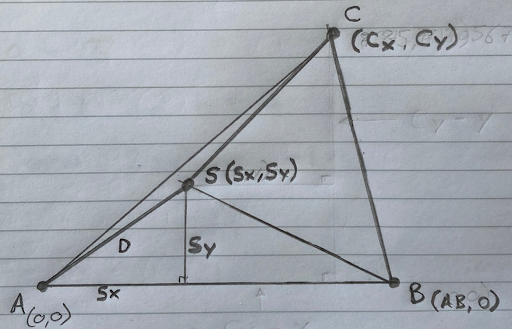 Our three systems are logging the time the sound arrives at each sensor (very accurately!).

The time taken for the sound to reach A is: the distance from S to A divided by the speed of sound. Likewise for B and C.

Sensors B and C will hear the sound earlier or later than A depending on DdiffB and DdiffC.

Let’s calculate the differences in those times:

Again, TdiffB and TdiffC could be negative if the source of the sound is closer to B or C than A.

Now we can use Pythogoras’ Theorem as before to study our triangles:

We need to add an extra triangle to include SC: 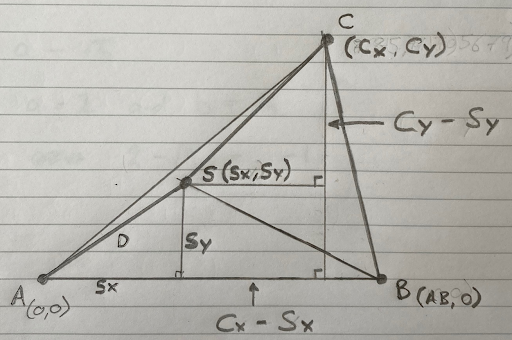 The width of the new triangle is:

The height of the new triangle is:

We now have our three equations:

We need to solve for D. To begin, let’s substitute the value for SY2 from the second equation into the first equation, so we can find the relationship between D and SX:

As before, the D2 cancel and so do the SX2 leaving:

Divide through by 2.AB:

Let’s make life easier for ourselves and say that:

Multiplying out the bracket, it becomes:

That’s ever so slightly horrible, but let’s go with it…

Now we have values for SX and SY in terms of D, which we can plug into equation 5:

Substituting for SX and SY we get:

Multiplying out the brackets gives (brace yourself!):

Simplifying and moving everything but the root to the left gives:

Fortunately the D2 term cancels out completely, which is good news. If it didn’t, we’d have a quartic equation to solve instead of a quadratic…

Dividing through by -2.CY gives:

We now need to square both sides to get rid of the root. Painful… But we need to do it… But first, to make life easier for ourselves, let’s simplify further and say:

Moving the terms on the right over to the left:

That’s a quadratic equation which we can solve in the usual way. Let’s make:

Remember that we can already calculate values for qa, qb and qc because we already know: da; SXa; db; and SXb.

That gives us two possible values for D. One will be negative or otherwise invalid, leaving us with a value for D.

We can then plug the value for D into equation 6 to find the X coordinate of S because we already know the values of SXa and SXb:

We can then calculate the Y coordinate of S using equation 3: