Connecting to an Arduino

Connecting to an Arduino

Besides connecting directly to your computer with the OBD-II board, you can also run the data through an Arduino board and display the information on an LCD for embedding a project. For this section, you will need an Arduino Uno (or another 5V Arduino board), jumper wires, and a serial LCD.

You will only need to make 6 connections between all 3 devices to get this set up. Use the diagram and the chart below to properly wire everything. 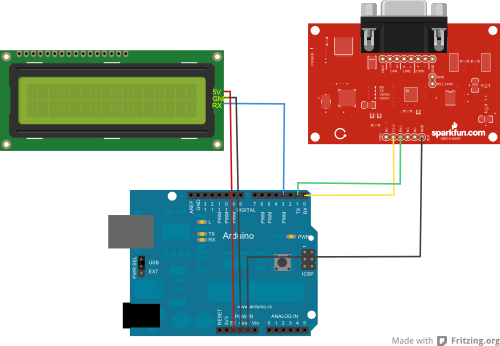 Another thing to note about this set up is that the Arduino is not powered off of the OBD-II board. Therefore, you will need to either use USB power from your laptop to power the Arduino, or use a battery supply suck as a 9V battery and 9V barrel jack adapter.

This example sketch is very simple. The Arduino simply communicates with the OBD-II board and then sends the information received to the LCD screen. You will need to include the SoftwareSerial library in order to communicate with the LCD screen. Set the LCD TX/RX lines to pins 2 and 3 on the Arduino, and initialize the rest of your variables.

The main loop of the code simply sets the cursor locations, clears out any old data on the LCD screen, receives the data from the OBD-II board, tranlates it to an integer and prints the vehicle speed and RPM to the screen.

The final section of code simply defines the functions to communicate with the OBD-II board. This saves any incoming characters to the serial buffer until a carriage return is received.The buffer index is set to 0 and the board then waits for the next string to come in.