Before we start wiring up electronics, a stand has to be made to hold the inductor above the ground. This guide isn't going to go over making a stand, but below is a photo of the stand used for reference. The inductor hangs about 5 inches above the table, and a 8-32 bolt (~1.5 inches in length) and nut are used to attach the inductor to the stand.

Tip: Make sure a magnet can stick to the bolt. The ferrous material of the bolt will "focus" the magnetic field lines on the inductor and the magnet will be pulled up to the center of inductor. 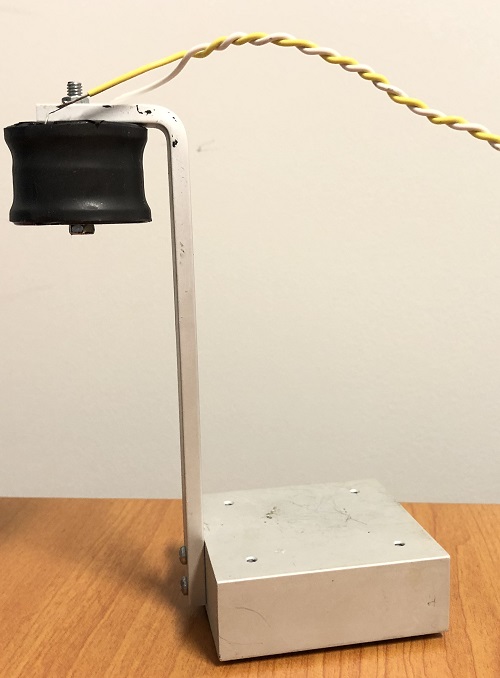 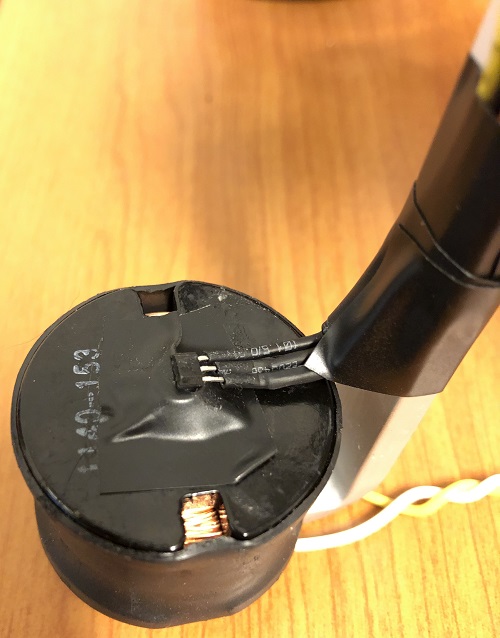 To control the inductor we're going to use an op-amp in a configuration called a comparator, which compares the output of the hall effect sensor to a reference voltage that is connected to the other input pin. The reference voltage is set with a potentiometer acting as a voltage divider - this creates an adjustable analog voltage between 0V and 5V. The voltage of the potentiometer represents what voltage we want the hall effect sensor to read, which is based on how far away the magnet is.

This circuit uses two voltage rails, 5V and 12V. The 12V rail is powering the inductor and op-amp, and the 5V rail is used for the voltage reference and hall effect sensor. Two power supplies are ideal, because if the 12V rail goes into current limiting mode, and the voltage drops, the hall effect sensor won't have a high enough voltage to detect when the magnet is close enough. You can, however, get away with a single power supply rail using a LM7805 linear voltage regulator. If you plan on using two power supplies, make sure you connect the grounds together, otherwise the circuit won't work correctly.

Note: The schematic lists U2 as a SS494, but the SS496 should be used as it has greater sensitivy, but the pinout is the same. 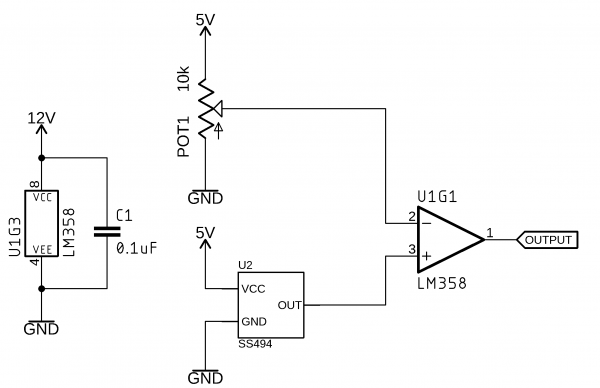 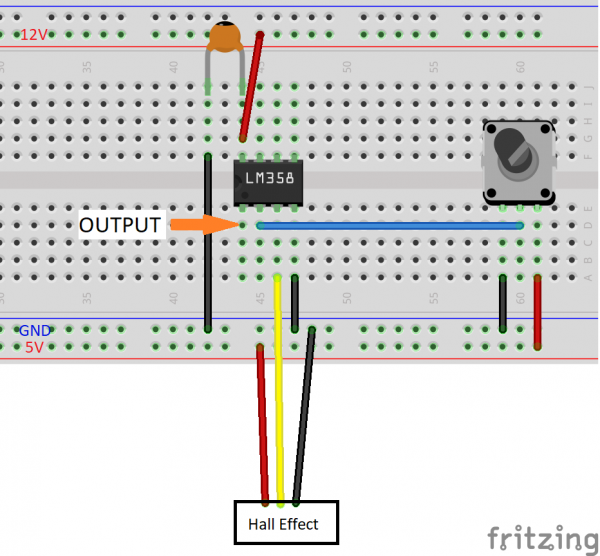 Once the circuit is built, we'll use a multimeter to measure the voltage at the non-inverting input (pin 2 of the op-amp) and turn the knob on the potentiometer until it reads 0V. Next, we'll position the magnet about 2cm away from the sensor, or about a thumb's thickness. Essentially, the magnet needs to be in the "sweet spot" - a position a bit further away than the position where the magnet wants to pull up on its own and stick to the inductor.

Looking at the output voltage of the op-amp (pin 1), it should be reading 9-12V. With the magnet still in position, we're going to slowly turn the potentiometer and increase the reference voltage until we see the voltage change from 12V to 0V. Moving the magnet up and down a little should change the output of the op-amp from high to low and low to high.

The comparator is trying to keep the voltages between the input pins equal and driving the output high or low so that the sensor value matches the reference value. In the next step we'll attach our inductor to the output of the op-amp and try to make a magnet levitate!