For this example, we'll be using a Raspberry Pi 3, a PCA9306 Level Translator Breakout, a 5V power supply and the Lumenati boards that we put together in the last section. The hookup will look like this: 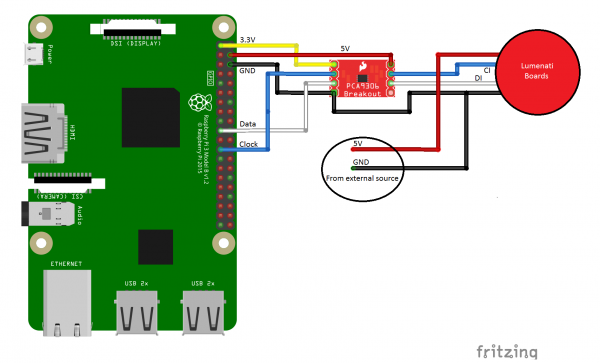 You'll notice from the diagram that the Lumenati boards are powered directly from an external 5V power supply and not from the header on the Raspberry Pi. While it is possible to drive the circuit as constructed with the supplied demo code from the Pi header, the 5V that's available there is fused. Since it is difficult to predict how much current the Pi itself is going to draw at any given moment, driving the LEDs through the Pi as well can become problematic with increased LED count and increased brightness, risking a brown-out condition with increased current consumption. Circumvent that condition entirely by tapping 5V and ground on the power supply before it reaches the Pi.

The connections of interest are in the following table.

Astute readers will notice that we've connected a clock signal to what looks like a data channel and a data signal to what looks like a clock channel on the PCA9306, if the labels are to be believed. But here's a little secret about those channels: they're virtually identical, electrically speaking. While the labels may be incongruent, it made the wiring just slightly more uniform.

The connections from the PCA9306 Breakout to the Lumenati boards are thus:

We've put together some really simple python code for you to get started with. The first is a really simple library to set up an array with the LED parameters and write them to the Lumenati boards.

The second demonstrates the use of those functions and makes some pretty lights.

Click here to get the code. Just drop the two files from SparkFun_Lumenati_Code/Firmware/RasPi into the same folder, and run Lumenati_Demo.py. If the stars align (and you've done everything right), the result should look as below.

The brightness is turned down to show the colors better.
More Examples: Looking for more examples with the Raspberry Pi? Try looking at the Python Library used with the Pimoroni Blinkt!.