Now that you've done your calculations, there is another factor to consider: conductive thread resistance. Unlike copper wire, which has very little resistance, conductive thread's resistance will vary depending on the metal used to make the thread and the thickness of the thread. Many conductive threads list resistance in Ohms/Ft. The lower this number is, the better, because less resistance means more electricity can get through to the components used in your project.

You may expect your project to work perfectly, but the resistance of your connections over distance may cause some additional complications in your circuit. 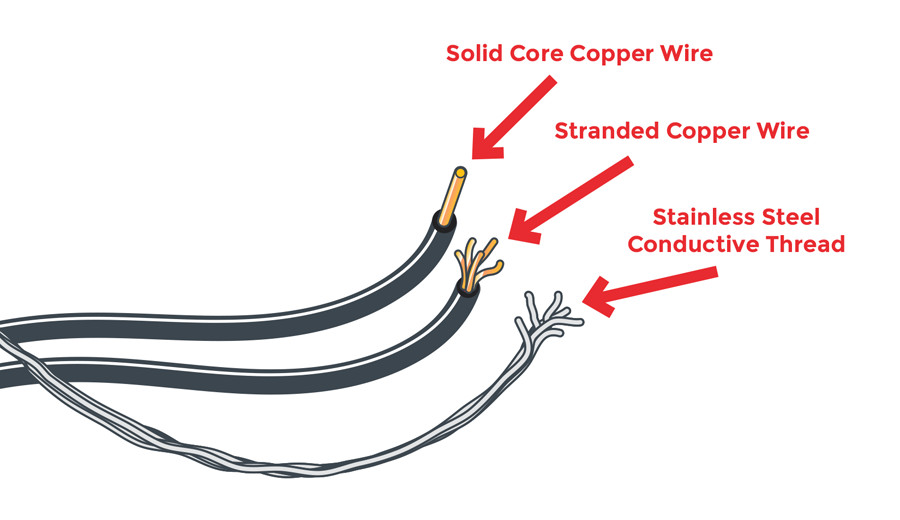 The basic electrical property Ohm’s Law states that running an electrical current through a material high in resistance causes the voltage to drop. The higher the current, the greater the voltage drop. This means that even though a LiPo battery powering your LilyPad may put out 3.7 volts, by the time it gets through the thread to your components, it may drop to 3.0 volts or less. Many electrical components, such as LEDs, need a certain voltage to function properly. To minimize voltage drop, we'll need to decrease the resistance of the power connections. There are a few ways to do this:

Use a non conductive thread to stitch bundled thread (either placed together or braided) to your base fabric. Leave enough open spaces in the stitching so you are able to stitch conductive thread to the larger thread bundle when connecting components. This video from e-textile expert Lynne Bruning shows this technique at around the 4:10 mark:

For large projects that require thread to travel long distances, projects with a lot of power-hungry pieces such as a large amount of LilyPad Pixel Boards, or in spots where thread may break under stress, here are some alternatives that work well for wearables:

Specialty nylon ribbon with flexible stranded wire woven into it is a great alternative to conductive thread with low resistance. You will need to solder to the tinsel within the ribbon in order to use in a project.

Here we have some conductive ribbon. Essentially, it's a fabric with 3 conductors woven into the ribbon. It measures roughly …

You can create your own lower resistance traces using thin strips of conductive fabric. We recommend using iron-on adhesive to attach to fabric or ribbon, then using conductive thread to hand stitch components to the traces.

Don't forget to insulate the fabric traces as you would conductive thread.

Ribbon cable is really helpful in situations where you need to make a lot of connections without a big mess of wires. Nothing…

Wire is prone to breaking if it is flexed repeatedly. For wearable projects that require maximum flexibility, use stranded wire (not solid), and look for special silicone-jacketed wire that is extremely flexible. For projects that will be washed, water may wick into exposed stranded wire, becoming trapped and potentially corroding it over time. Apply a small dab of silicone sealant to the cut ends of the wire to prevent this from happening.

When soldering, be careful not to melt or burn nearby fabric. Elevate or insulate the back of the LilyPad board from any backing fabric before applying heat.

If you have never soldered before or worked with wire, we recommend visiting the following tutorials.

This tutorial covers everything you need to know about through-hole soldering.
Favorited Favorite 63

How to strip, crimp, and work with wire.
Favorited Favorite 43

Once you've identified your project's power needs and considerations, it's time to move on to choosing a power source for your project.