Welcome to the fourth experiment in the LilyPad Design Kit, where you will investigate the inner workings of a button by constructing your own! Creating your own components is inexpensive, often easy, and allows you to customize them to your needs.

Here are the parts you’ll need for this project. If you’re using the LilyPad Design Kit, you’ve already got them all!

You will need to pick up some felt from a fabric store if you are not following along with the LDK. 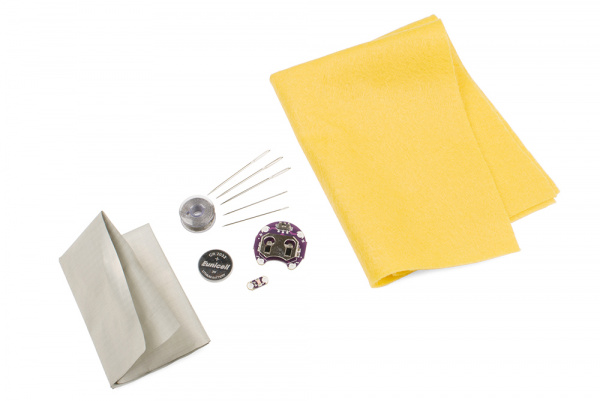 It’s fine to get your fabric ready on the embroidery hoop, but we’re not going to start with sewing this time!

Let’s discuss our plan for a moment. What we want from this button is a reaction to being pressed. In order to get that, we’re going to build it such that there is an electrical connection between the two sides when it is pressed, but not when it is released. One of the easier ways to do this is to create two conductive layers and separate them with a permeable layer. When firmly pressed, the conductive layers will contact through the permeable layer, creating a connection. This sandwich will be conductive on the top and bottom, however, and prone to short circuits and interference. In order to protect it from these problems, we’ll sew the whole thing into a non-conductive covering made of felt. 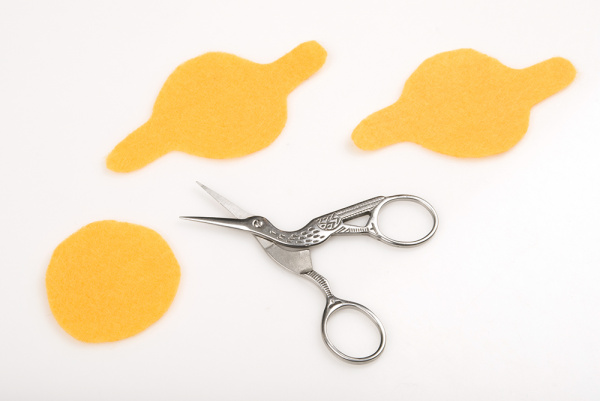 Starting with the felt, we’re going to cut our pieces. You need two circles with tabs poking out from the sides -- these will be the protective exterior covering of the button. You’ll also need a circle, just a little bit smaller than the central circle of each covering piece. 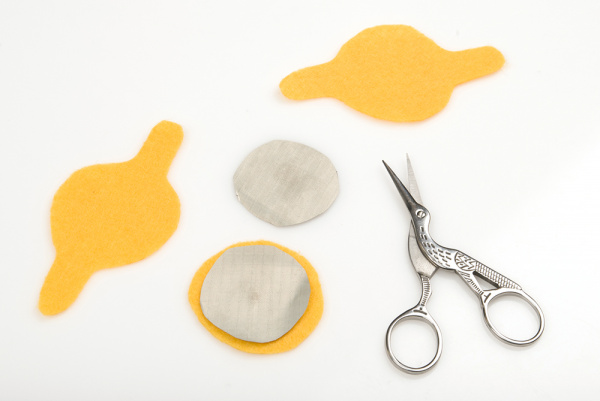 The conductive fabric, as the name implies, will serve as our conductive layer. The fabric is made out of silver-coated nylon ripstop material. Like other silver products, it will tarnish with handling and turn darker in color, so don't worry about that when you see it. It's perfectly normal. Also, these pieces will be on the inside, so it won't be visible in the finished product. From the conductive fabric, you need to cut two small circles. They should be of the same size, and both slightly smaller than the circle you cut out of the felt. You need to be able to set your felt circle on top of each conductive fabric without any conductive fabric peeking out from underneath. Trim if you need to. 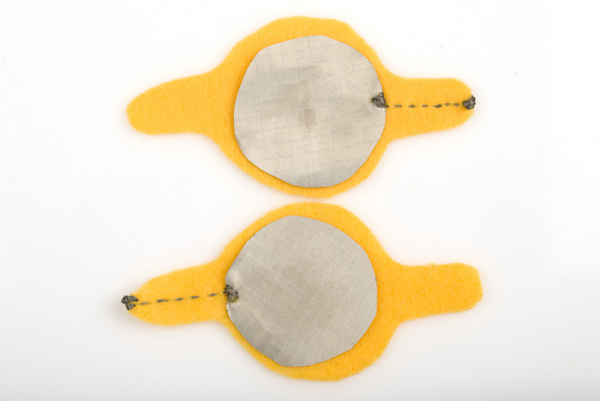 With a small dot of glue, affix one conductive circle to the center of the circle of each exterior piece. You should be able to sandwich these so that the felt shapes match up and the two conductive circles touch. With your conductive thread, sew a couple of stitches into the edge of one of the conductive circles, close to one of the tabs. You’re trying to establish a conductive connection between the thread and the fabric, so make these stitches neat and tight. Sew from the edge of the fabric out to the tip of the tab, and sew several stitches into the felt. You’re creating a small conductive pad here, so put in as many stitches as you need to feel comfortable that you’ll have an easy time connecting to it with a different trace later. Repeat these steps with the other felt case half and conductive circle, extending out to the opposite tab. Now, if you sandwich the covering halves together, conductive fabric inside and touching, you should have a trace extending from the top half to one tab, and from the bottom half to the other tab. 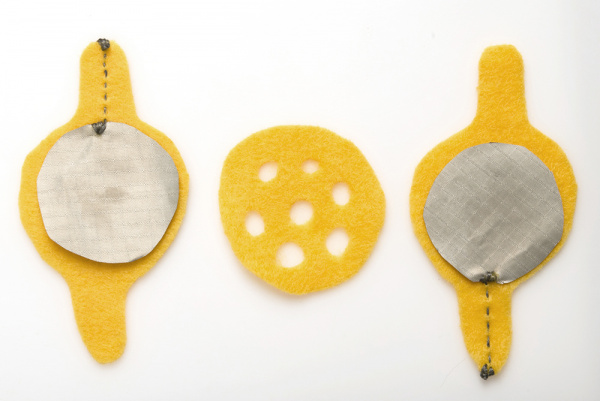 The last piece left is the felt circle. This is going to serve as the permeable barrier between the conductive fabric circles, but it isn’t permeable yet. In order to make it work for our purposes, we need to cut a few small holes in the circle. These should all be within the perimeter of the circle; you don’t want any to overlap the edge. 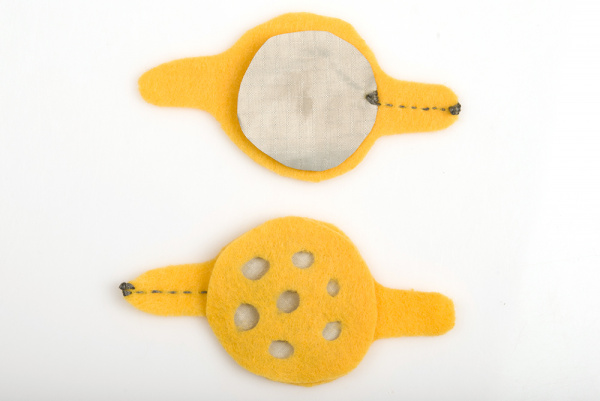 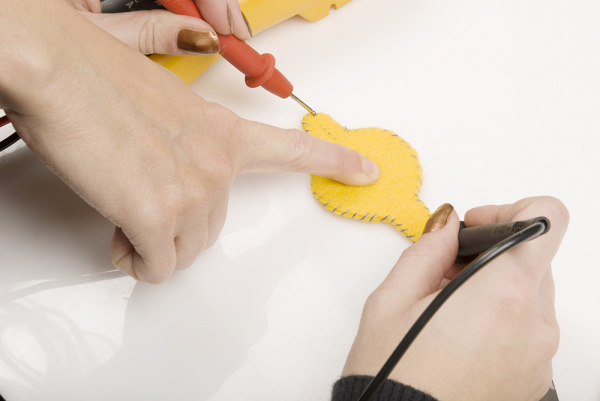 You can check this with a multimeter; use the continuity setting and press one probe to each of the conductive thread pads you made at the ends of the tabs. You should not have continuity. Now, while still pressing the probes down, have someone push the button. If there isn’t anybody around to press the button, try using a foot, or perhaps your chin. When the button is pressed, you should hear a tone from your multimeter. No press, no tone; press, tone. Do this for a while, because it’s really satisfying. 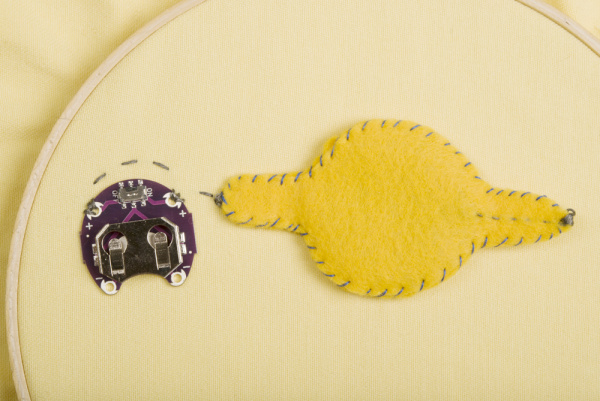 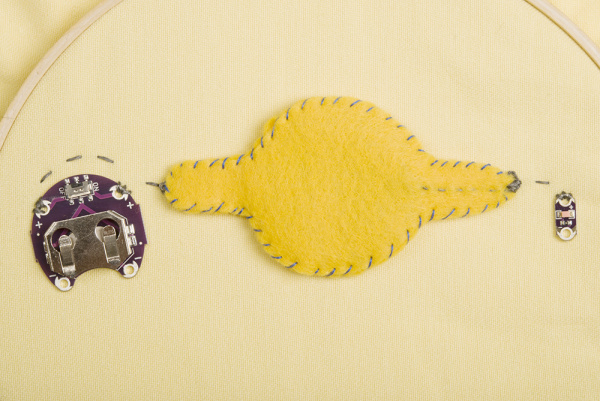 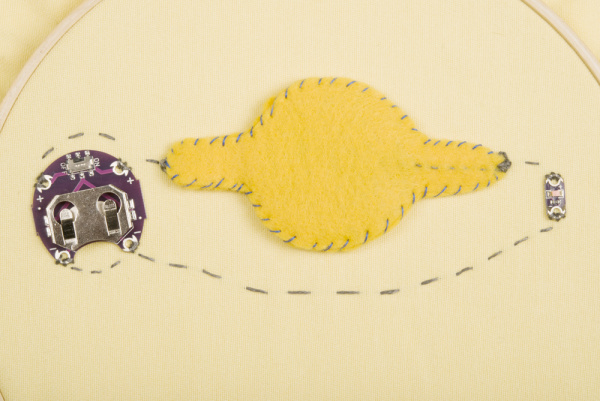 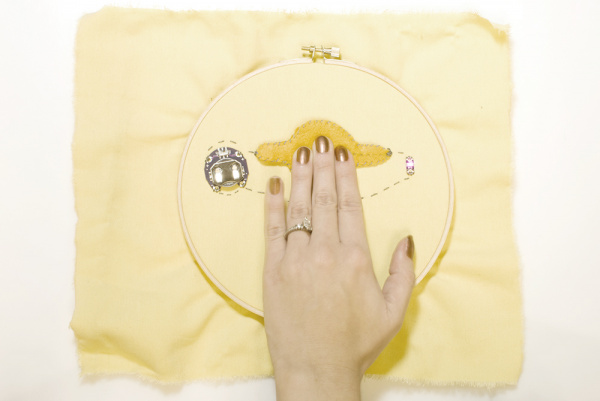 Here are a few tutorials that will help you expand even further into the world of conductive buttons and switches!