Basic diodes are usually represented with a triangle pressed up against a line. Diodes are also polarized, so each of the two terminals require distinguishing identifiers. The positive, anode is the terminal running into the flat edge of the triangle. The negative, cathode extends out of the line in the symbol (think of it as a - sign).

There are a all sorts of different types of diodes, each of which has a special riff on the standard diode symbol. Light-emitting diodes (LEDs) augment the diode symbol with a couple lines pointing away. Photodiodes, which generate energy from light (basically, tiny solar cells), flip the arrows around and point them toward the diode.

Other special types of diodes, like Schottky's or zeners, have their own symbols, with slight variations on the bar part of the symbol.

Transistors, whether they're BJTs or MOSFETs, can exist in two configurations: positively doped, or negatively doped. So for each of these types of transistor, there are at least two ways to draw it.

BJTs are three-terminal devices; they have a collector (C), emitter (E), and a base (B). There are two types of BJTs -- NPNs and PNPs -- and each has its own unique symbol.

Like BJTs, MOSFETs have three terminals, but this time they're named source (S), drain (D), and gate (G). And again, there are two different versions of the symbol, depending on whether you've got an n-channel or p-channel MOSFET. There are a number of commonly used symbols for each of the MOSFET types:

The arrow in the middle of the symbol (called the bulk) defines whether the MOSFET is n-channel or p-channel. If the arrow is pointing in means it's a n-channel MOSFET, and if it's pointing out it's a p-channel. Remember: "n is in" (kind of the opposite of the NPN mnemonic).

Our standard logic functions -- AND, OR, NOT, and XOR -- all have unique schematic symbols:

Adding a bubble to the output negates the function, creating NANDs, NORs, and XNORs:

They may have more than two inputs, but the shapes should remain the same (well, maybe a bit bigger), and there should still only be one output.

Integrated circuits accomplish such unique tasks, and are so numerous, that they don't really get a unique circuit symbol. Usually, an integrated circuit is represented by a rectangle, with pins extending out of the sides. Each pin should be labeled with both a number, and a function. 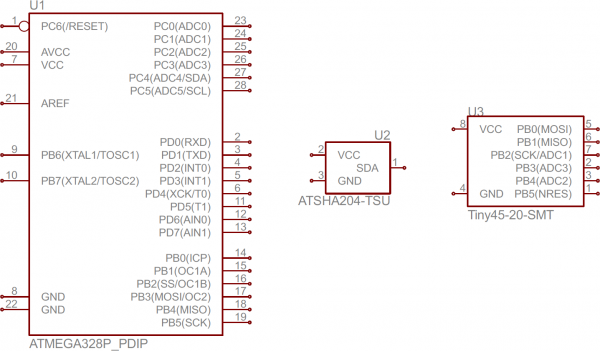 Schematic symbols for an ATmega328 microcontroller (commonly found on Arduinos), an ATSHA204 encryption IC, and an ATtiny45 MCU. As you can see, these components greatly vary in size and pin-counts.

Because ICs have such a generic circuit symbol, the names, values and labels become very important. Each IC should have a value precisely identifying the name of the chip.

Some of the more common integrated circuits do get a unique circuit symbol. You'll usually see operation amplifiers laid out like below, with 5 total terminals: a non-inverting input (+), inverting input (-), output, and two power inputs.

Often, there will be two op amps built into one IC package requiring only one pin for power and one for ground, which is why the one on the right only has three pins.

Simple voltage regulators are usually three-terminal components with input, output and ground (or adjust) pins. These usually take the shape of a rectangle with pins on the left (input), right (output) and bottom (ground/adjust).

Crystals or resonators are usually a critical part of microcontroller circuits. They help provide a clock signal. Crystal symbols usually have two terminals, while resonators, which add two capacitors to the crystal, usually have three terminals.

Whether it's for providing power, or sending out information, connectors are a requirement on most circuits. These symbols vary depending on what the connector looks like, here's a sampling:

We'll lump these together, since they (mostly) all make use of coils in some way. Transformers (not the more-than-meets-the-eye kind) usually involve two coils, butted up against each other, with a couple lines separating them:

Relays usually pair a coil with a switch: 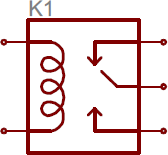 Speakers and buzzers usually take a form similar to their real-life counterparts: 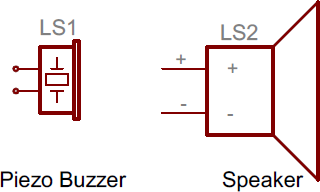 And motors generally involve an encircled "M", sometimes with a bit more embellishment around the terminals:

Fuses and PTCs -- devices which are generally used to limit large inrushes of current -- each have their own unique symbol:

The PTC symbol is actually the generic symbol for a thermistor, a temperature-dependent resistor (notice the international resistor symbol in there?).

No doubt, there are many circuit symbols left off this list, but those above should have you 90% literate in schematic reading. In general, symbols should share a fair amount in common with the real-life components they model. In addition to the symbol, each component on a schematic should have a unique name and value, which further helps to identify it.