A Handful of Distinctions

When you're shopping for servos for your project, there are several parameters that you'll want to keep in mind.

The 1-to-2 millisecond pulse range is more of a convention than a hard-and-fast standard. Some servo motors respond to even shorter or longer pulses with an extended range of motion.

Be warned that there is a risk -- this expanded range of motion isn't universal. Some servos are mechanically limited to 90° rotation. Attempting to drive them beyond their limits can cause damage, such as stripped gears. The servo that we see dismantled here suffered exactly that fate. 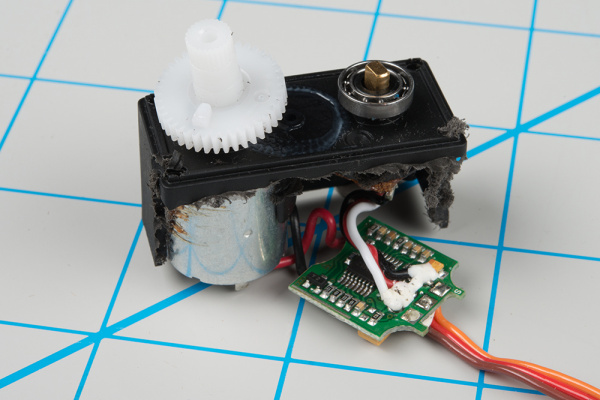 The nub on the gear is used to constrain the range of rotation.

Moving even further from the 90° range, there are also full rotation, continuous rotation, or simply 360° servos. As the name states, the shaft turns continuously, making them useful as drive motors. Visually, they look just like regular servos. 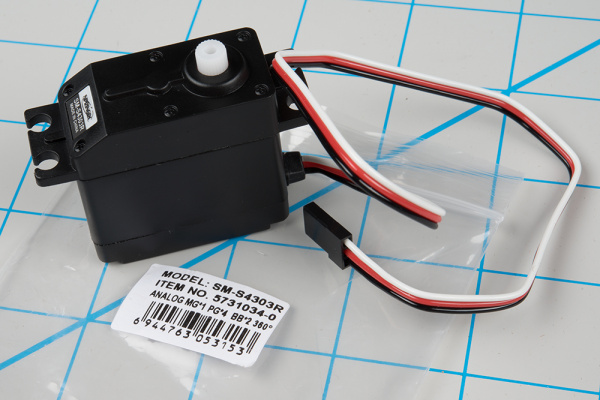 Look carefully, and you'll notice the "360°" mark on the packaging.

Rather than controlling position, the continuous rotation servo translates the 20 mSec pulse-train signal into the rotational speed and direction of the shaft. Otherwise, they're very similar to regular RC servos -- they use the same power supply, control signals, 3-pin connector, and are available in the same sizes as RC servos.

The overall speed is relatively low -- around 60 RPM is a common maximum rate -- if you need higher rotation speed, servos aren't the best fit -- DC gearmotors or brushless DC motors are more likely candidates, but they aren't directly compatible with servo control signals. 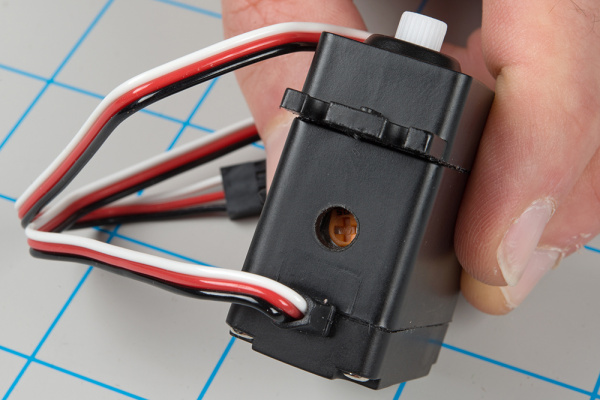 On closer inspection, continuous rotation servos have one small difference from regular servos: they usually have a "nulling" trimpot, used to adjust their response to the control signal. It's typically set so that a 1.5 mSec pulse stops the motor. Shorter pulses will cause it to turn counterclockwise, and longer pulses cause it to turn clockwise.

The pulse-controlled servos we're discussing here are analog. There are also digitally-controlled servos that use a high-speed pulse train, and have a serial communication interface that allows more detailed configuration, typically with parameters that are tailored to RC vehicles.

One last thing to look at when considering a servo is the type of gears it contains.

Inexpensive servos (such as the one dismantled here) usually contain molded plastic gears, while more expensive servos have metal gears. Plastic gears are more likely to strip if the motor is jammed or overloaded. The old adage rings true: you get what you pay for. 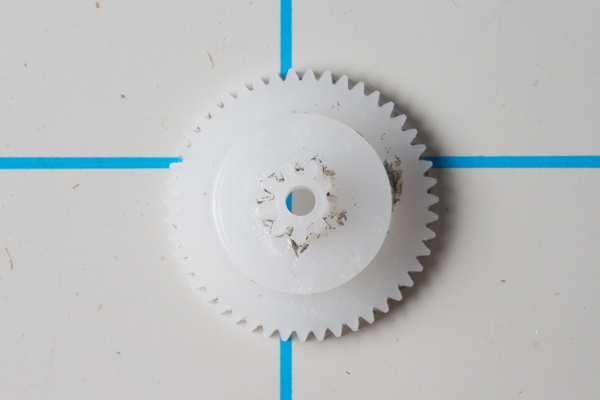 Note the missing tooth at about 3:00 o'clock on the inner gear!
Share
Use this URL to share: