Popularized by mobile games like Temple Run, the endless running type of game is an extremely simplistic spin on the larger "platform" genre where a player has limited control over a character that is constantly moving forward. Flappy bird, while generally not considered a "running" game, was another popular infinite platform game with limited control over the character: users could only tap the screen to make the bird fly upward in order to navigate through obstacles while constantly moving to the right.

We're going to make our own endless runner game using an Arduino, button and character LCD. While not as visually appealing as Temple Run or Flappy Bird, it's almost as addicting.

The code for this game comes from Joshua Brooks on Instructables. The original project can be found here. 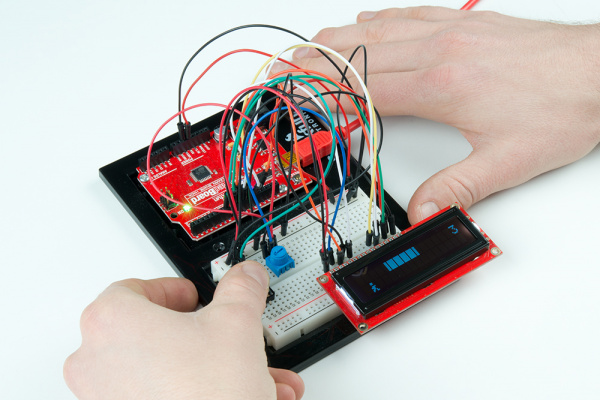 You can complete this project with parts from the SparkFun Inventor's Kit v4.0. Specifically, you will need:

Note: If you purchase the parts separately, you will need to solder headers onto the LCD.