For such a simple component, diodes have a huge range of uses. You'll find a diode of some type in just about every circuit. They could be featured in anything from a small-signal digital logic to a high voltage power conversion circuit. Let's explore some of these applications.

A rectifier is a circuit that converts alternating current (AC) to direct current (DC). This conversion is critical for all sorts of household electronics. AC signals come out of your house's wall outlets, but DC is what powers most computers and other microelectronics.

A half-wave rectifier can be made out of just a single diode. If an AC signal, like a sine wave for example, is sent through a diode any negative component to the signal is clipped out.

A full-wave bridge rectifier uses four diodes to convert those negative humps in the AC signal into positive humps.

The bridge rectifier circuit (middle), and the output wave form it creates (blue/right).

These circuits are a critical component in AC-to-DC power supplies, which turn the wall outlet's 120/240VAC signal into 3.3V, 5V, 12V, etc. DC signals. If you tore apart a wall-wart, you'd most likely see a handful of diodes in there, rectifying it up. 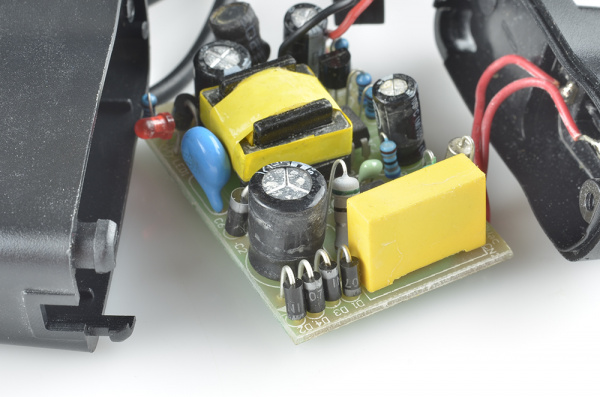 Can you spot the four diodes making a bridge rectifier in this wall-wart?

Ever stick a battery in the wrong way? Or switch up the red and black power wires? If so, a diode might be to thank for your circuit still being alive. A diode placed in series with the positive side of the power supply is called a reverse protection diode. It ensures that current can only flow in the positive direction, and the power supply only applies a positive voltage to your circuit.

This diode application is useful when a power supply connector isn't polarized, making it easy to mess up and accidentally connect the negative supply to the positive of the input circuit.

Forget transistors! Simple digital logic gates, like the AND or the OR, can be built out of diodes.

For example, a diode two-input OR gate can be constructed out of two diodes with shared cathode nodes. The output of the logic circuit is also located at that node. Whenever either input (or both) is a logic 1 (high/5V) the output becomes a logic 1 as well. When both inputs are a logic 0 (low/0V), the output is pulled low through the resistor. 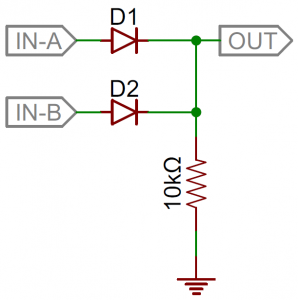 An AND gate is constructed in a similar manner. The anodes of both diodes are connected together, which is where the output of the circuit is located. Both inputs must be logic 1 forcing current to run towards the output pin and pull it high also. If either of the inputs are low, current from the 5V supply runs through the diode. 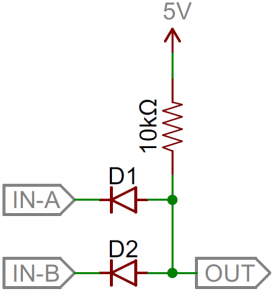 For both logic gates, more inputs can be added by adding just a single diode.

Diodes are very often used to limit potential damage from unexpected large spikes in voltage. Transient-voltage-suppression (TVS) diodes are specialty diodes, kind of like zener diodes -- lowish breakdown voltages (often around 20V) -- but with very large power ratings (often in the range of kilowatts). They're designed to shunt currents and absorb energy when voltages exceed their breakdown voltage.

Flyback diodes do a similar job of suppressing voltage spikes, specifically those induced by an inductive component, like a motor. When current through an inductor suddenly changes, a voltage spike is created, possibly a very large, negative spike. A flyback diode placed across the inductive load, will give that negative voltage signal a safe path to discharge, actually looping over-and-over through the inductor and diode until it eventually dies out. 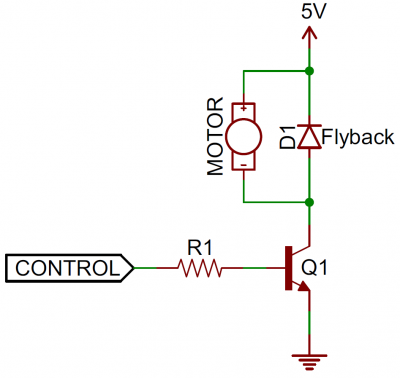 That's just a handful of applications for this amazing little semiconductor component.