There is a sixth element in digital logic, the inverter (sometimes called a NOT gate). Inverters aren't truly gates, as they do not make any decisions. The output of an inverter is a 1 if the input is a 0, and vise versa.

A few things of note about the above image:

Digital logic circuits are usually represented using these six symbols; inputs are on the left and outputs are to the right. While inputs can be connected together, outputs should never be connected to one another, only to other inputs. One output may be connected to multiple inputs, however.

The descriptions above are adequate to describe the functionality of single blocks, but there is a more useful tool available: the truth table. Truth tables are simple plots which explain the output of a circuit in terms of the possible inputs to that circuit. Here are truth tables describing the six main elements: 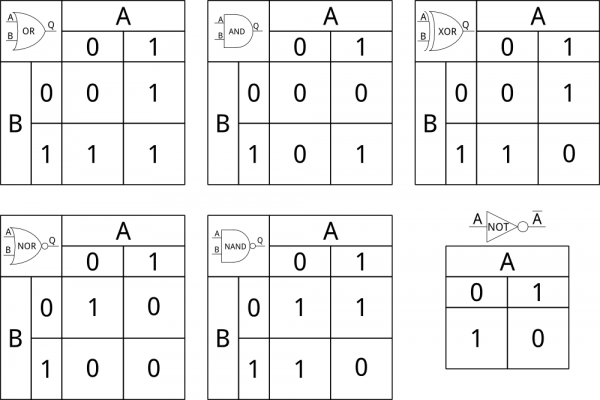 Truth tables can be expanded out to an arbitrary scale, with as many inputs and outputs as you can handle before your brain melts. Here's what a four-input circuit and truth table look like:

It is, of course, useful to be able to write in a simple mathematical format an equation representing a logical operation. To that end, there are mathematical symbols for the unique operations: AND, OR, XOR, and NOT.

You'll note that there are two missing elements on that list: NAND and NOR. Typically, those are simply represented by complementing the appropriate representation: