Registered jack connectors are standard for telecommunications equipment into a local exchange. The names one normally hears associated with them (RJ45, RJ12, etc) are not necessarily correct, as the RJ designator is a based on a combination of the number of positions, the number of conductors actually present, and the wiring pattern. For example, while the ends of a standard ethernet cable are usually referred to as "RJ45", RJ45 actually implies not only an 8 position, 8 conductor modular jack, it also implies that it is wired for ethernet.

These modular connectors can be very useful, since they combine ready availability, multiple conductors, moderate flexibility, low cost, and moderate current carrying capacity. While not originally intended to deliver a great deal of power, these cables can be used to deliver data and a couple of hundred milliamps from one device to another. Care should be taken to ensure that jacks provided for applications like this are not connected to conventional ethernet ports, as damage will result. 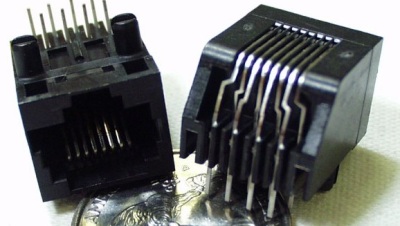 A standard 8p8c (8-position, 8-conductor) "RJ45" modular jack. Be aware that if you intend to use this type of jack to pass DC signals and power, you must avoid using connectors with built-in signal transformers.

Named for the shape of their shell, D-subminiature connectors are a classic standard in the computing world. There are four very common varieties of this connector: DA-15, DB-25, DE-15, and DE-9. The pin number indicates the number of connections provided, and the letter combination indicates the size of the shell. Thus, DE-15 and DE-9 have the same shell size, but a different number of connections. 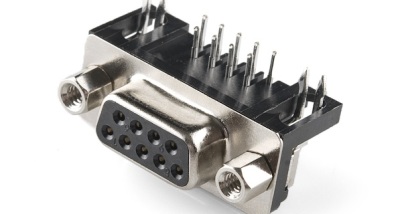 Female DE-9 board-mount connector. Gender is defined by the pins or sockets associated with each signal, not the connector as a whole, making this connector female despite the fact that it effectively inserts into the shell of the mating connector.

DB-25 and DE-9 are the most useful to the hardware hacker; many desktop computers still include at least one DE-9 serial port, and often one DB-25 parallel port. Cables terminated with DE-9 and DB-25 connectors are widely available, too. As with the modular connector above, these can be used to provide power and point-to-point communications between two devices. Again, since the common usage of these cables does not include power transmission, it is very important that any repurposing of the cables be done cautiously, as a non-standard device plugged into a standard port can easily cause damage.