The SparkFun BlackBerry Trackballer Breakout gives the user easy access to a trackball which measures up, down, left, and right movements, as well as clicks on the board. It also adds a bit of flair to your project with 4 LEDs. 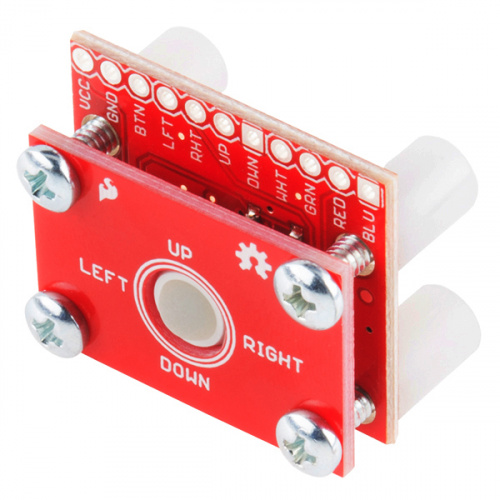 The SparkFun BlackBerry Trackballer Breakout gives you easy access to a trackball which measures up, down, left, and right mo…

We recommend the following products to follow along with this hookup guide.

If you aren't familiar with the following concepts, we recommend reviewing them before beginning to work with the BlackBerry Trackballer Breakout.

This tutorial covers everything you need to know about through-hole soldering.
Favorited Favorite 71

How to strip, crimp, and work with wire.
Favorited Favorite 51

This tutorial covers the concept of analog and digital signals, as they relate to electronics.
Favorited Favorite 67

There are five main features to the breakout board of which the user should be aware. 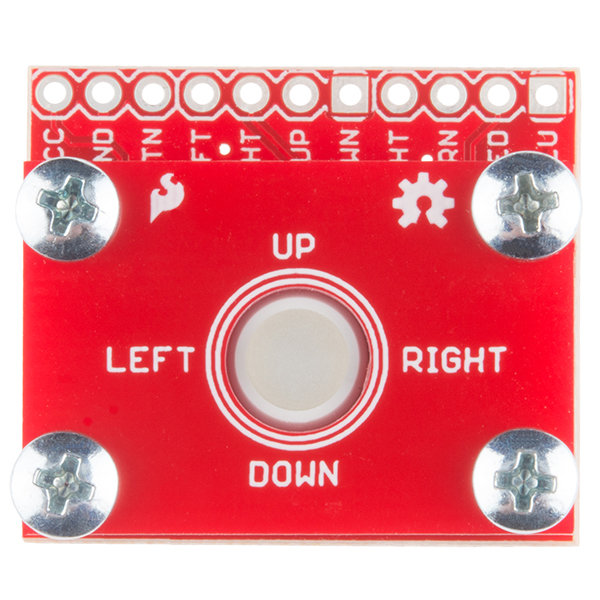 Don't let the sleek interface fool you- there's a lot going on with this little board!

The BlackBerry trackball is the main feature of this board. Four tiny spindles on the trackball each have small magnets on their ends. These each trigger a paired SMD hall effect sensor, giving the user the ability to track up, down, left, and right movement of the trackball.

The four directions can be tracked as outputs on the header pins labeled LFT, RHT, UP, and DWN.

Underneath the trackball, there is a small SMD momentary switch. This allows the user to trigger events or make selections with a simple 'click'.

This output is broken out to the header pin labeled BTN.

Additionally, underneath the trackball are four LEDs. The LED colors include:

These LEDs can light up the clear trackball any color desired by the user. Combinations of the four LEDs lit up can also be used to customize the trackball color.

Each LED is broken out to its own header pin. The header pins are labeled WHT, GRN, RED, and BLU.

In order to properly run the hall effect sensors, momentary switch, and LEDs, the user must supply power on two headers broken out, labeled VCC and GND. Power supplied to the board should be regulated, but can be anywhere from 2.5-5.25V.

Please note: We test the mounting boards in-house before shipping the trackballer breakouts out to customers, but keep in mind adjusting the tightness of the screws and standoffs may affect the functionality of the trackball. Overtightening the screws may cause malfunctions of some of the hall effect sensors.

This mounting board can be replaced with other types of mechanical stabilization provided by the user. For example, if the trackballer breakout is mounted into a project enclosure, the top mounting PCB may be removed.

Now that you are familiar with the Trackballer Breakout board, it's time to hook everything up!

We recommend using right angle headers to solder to the standard 0.1" breakout pins. This will allow you to easily read the header labels without jumper wires in the way. However, you could also solder bare wires directly to the PCB if you wish. If you're unsure how to do this, please check out our tutorial here.

Once headers are soldered on the board, you can now use jumper wires to connect the trackball breakout to the RedBoard. Use the following connections.

Once everything is connected, your circuit should look like the following diagram: 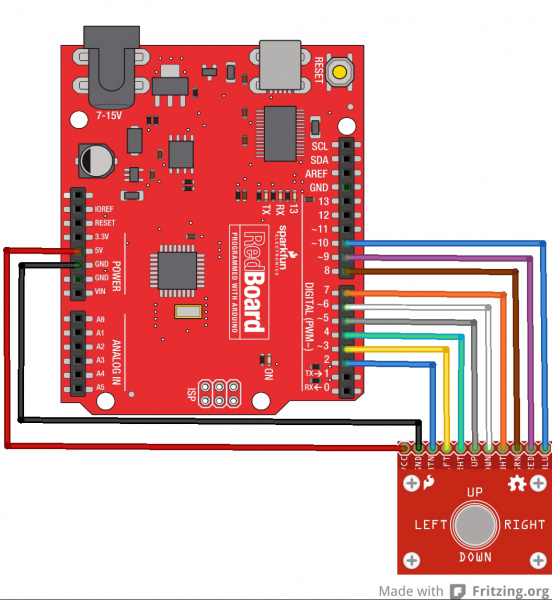 Once the circuit is hooked up properly, it's time to upload code to the RedBoard and start playing with the trackballer.

If you are unfamiliar with how to use the Arduino IDE, please check out our tutorial here.

First, download the demo sketch, and open it up in your Arduino IDE.

You can also download the most up-to-date code from the GitHub repo.

Make sure to select Uno in the board drop-down menu, and select the correct COM port for your RedBoard. Upload the code.

With the code uploaded, open up your favorite serial port monitor. Use the settings 9600bps, 8, N, 1. If you are unsure how to do this, check out our Serial Terminal Basics tutorial.

Let's take a look at what the code does. In the first section, we are declaring pin connections between the trackballer and the RedBoard. This includes the four trackball pins, the button, and the LEDs. We also declare our variables we will be using later in the sketch.

We begin our serial port at 9600bps, and begin cycling through turning on each of the LEDs, one at a time. Each LED remains on for one second, then turns off. Once all the LEDs have been cycled, we move on to the main loop where the trackball shows its capabilities.

When the main loop begins, the RedBoad will be waiting for input from the trackball, and will output a coordinate to the serial monitor. The RedBoard first polls each of the trackball pins. The function pulseIn waits for up to 20000 microseconds to determine if there is any pulse (the pin driving HIGH) coming in from the trackballer. If so, the pulse length (again, in microseconds) is recorded to the variable name, and the RedBoard moves on to the next pin. If no pulse comes in, the variable is assigned the value of 0. You can find more information on this function here.

Once the variables have been written, the RedBoard then compares each value to determine if there was any pulse input. In our case, we simply want to see any movement, so we compare to a time of 0 seconds. If you want to only register long scrolls, you can increase the value being compared. If pulses were recorded, we adjust the x- and y-coordinates accordingly. Since we are basing this off of a Cartesian coordinate system, we record Up and Right movement as positive incrementations, while Down and Left movements are negative incrementations.

These coordinates are then printed to the Serial monitor.

Finally, we check for any button clicks. If the RedBoard reads the button pin as LOW, the button has been clicked, and this is output to the Serial terminal.

If your trackballer is hooked up correctly and your RedBoard has been programmed without issue, you should see the following output on your terminal monitor. Try scrolling the trackball and clicking the button to verify everything is working correctly. The trackball position counter will increment up or down, depending on how you roll the ball. 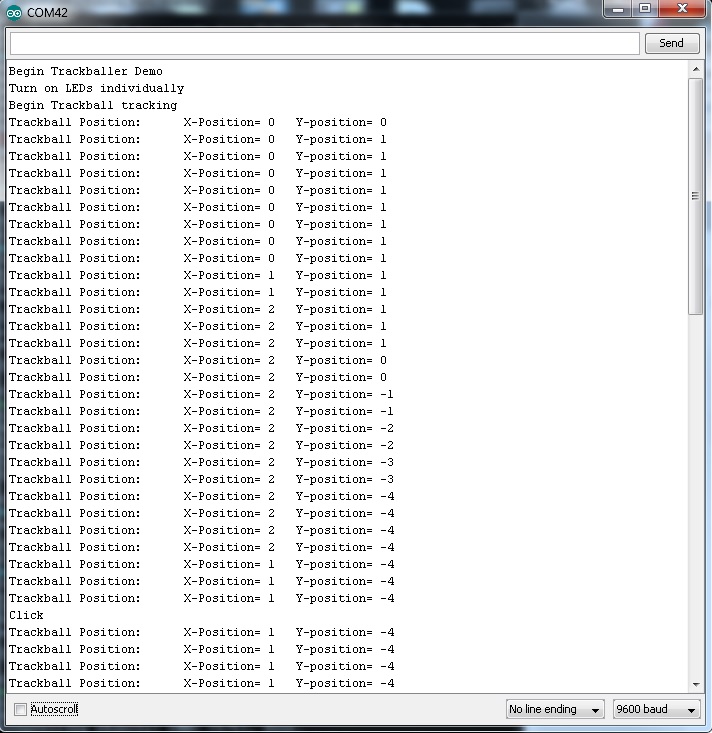 In this example, I rolled the trackball up and to the right. I then rolled it down several times and to the left. You can see when I clicked the push button towards the bottom.

Now that you've successfully got your BlackBerry Trackballer breakout up and running, it's time to incorporate it into your own project!

Once you've successfully gotten data out from your trackballer breakout, it's time to create your own project based around the breakout board! Will you use it as a driver for a remote robot? Or perhaps an interactive art display? We want to see what you come up with! If you need some ideas to get started, try customizing the LED color of the trackball to light up when you press the button. Alternatively, try using your trackballer as a drawing tool in Processing! Need some inspiration for your next project? Check out some of these tutorials:

Send serial data from Arduino to Processing and back - even at the same time!
Favorited Favorite 35

HID Control of a Web Page

Learn how to move a slider on a webpage and make a motor spin. We connect HTML and HID to read sensors and interface with the physical world.
Favorited Favorite 14