Jaymes Dec returns for the second installment of a series on useful strategies for makers. Jaymes is the Fab Lab Integrator at the Marymount School, a K-12 all-girls independent school in Manhattan and was recently named a “Teacher of the Future” by the National Association of Independent Schools and a Fab Learn Fellow by Stanford University.

Give them a menu of challenges or prompts

I wish that all of my students would come into class on the first day of school and know exactly what project they want to work on that semester. But the fact is that they usually have no idea what is even possible with the materials and tools, let alone what they want to make. I find that a really effective way to scaffold the ideation process is to give my students a menu of challenges, or prompts. This is different from giving them a list of projects to chose from. Challenges or prompts are more open-ended and allow students the flexibility needed to make the project their own idea and to reflect their own interests. One of the more successful prompts that I gave my students last year was: make something that plays music. Two students who love cooking made a working piano out of brownies and marshmallows. One student made a drum playing robot using Legos. Two other musical students laser cut and assembled real working wood violins. Because the prompt was so vague, we saw an awesome range of student projects that truly reflected their interests. For more on creating your own prompts, see this great post by Gary Stager. 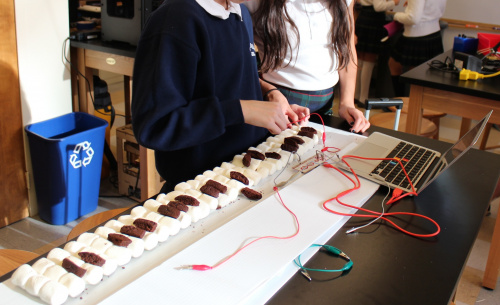 Address an environmental concern about your community

Some prompts are so good that they can anchor a whole class. A few years ago, I worked on a project called GreenFab, a Fab Lab for High School students in Hunts Point, South Bronx. We taught classes on physical computing, digital design, and fabrication through the lens of sustainability and green technologies. At the end of each semester, we gave students four weeks to work on a final project. The prompt that we gave them was that the project had to address an environmental concern that the students had about their community. The students created some amazing projects including: a table that charged USB devices with solar panels, an aquaponics system that grew food using fish waste, a cross-section model of a green roof with temperature sensors, a portable air conditioner, a device that dries your nail polish for you, and many, many more. Because we never defined the key words in that prompt (environment and community), the students were free to define those terms themselves and discover projects that they really cared about. 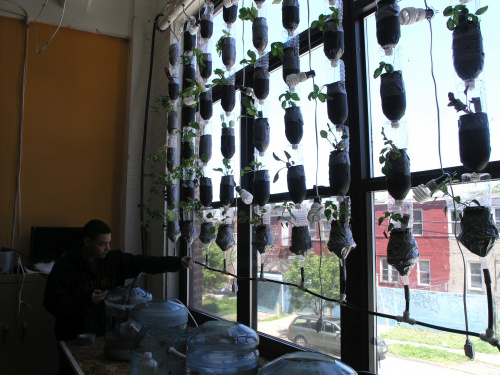 (Photo credit: Stephanie Wentzel)
Check out some more projects from that program here:http://www.nsf.gov/news/newsmedia/greenfab/

Discover their passions and offer ideas

Jeff Sturges, Conductor of the Mt. Elliot Makerspace in Detroit, suggests asking students to think about what excites them. If you have time at the beginning of the year, it might be best to schedule one on one interviews and brainstorm project ideas with students. But you can also start the year with a survey to find out what really interests your students. Ask questions like: What are you passionate about? or What did you spend the most time this summer doing? Don't be afraid to offer ideas to your students based on their interests and passions. Even if the core of the idea originally comes from the teacher, if it reflects the student’s interests sufficiently, they will be able to make the idea their own and get engaged in the project. I remember one student in the GreenFab program who was having a hard time finding a project that interested him. He clearly was not engaged in the assignment, preferring to day dream about playing basketball. I suggested that he try to make a device that automatically keeps score in a basketball game. He wound up using a whisker switch and an Arduino to make a counter that lit up an LED every time someone tossed a crumpled piece of paper in the recycling bin.

Create a project for a specific environments

Inspired by a class that Marina Zurkow taught while I was a student at NYU’s ITP, I created an Open Studio elective called Site: Specific at the Marymount School of New York. Open Studio classes are student-driven electives that we offer to 6th-9th graders. In Site: Specific, I ask students to start by deciding on a site in the school building and then designing and building an interactive installation that changes how people behave in that space. Starting with a specific environment or site really helps students come up with fantastic ideas. I’ve seen students turn the staircase bannister into a music instrument, an RFID card reader that dishes out compliments, and a device that automatically plays music when anyone enters the elevator. Because the project is tied to a specific public environment, students imaginations can run wild while constrained by the affordances of that site.

One of my favorite assignments at ITP was the first project in Tom Igoe's networked objects class. He called this assignment the Physical Computing Improv Project. Here is his description:

This project is a quick one for me to get to know what your physical computing skills are. Pick at least one item from each of these three lists, and combine them into a responsive object...Your object has to respond to a person’s action….The interaction must be repeatable, and clear to the person in question. It doesn’t have to be meaningful, but it does have to be engaging in some way. Work alone on this. You have one week to complete it. Don’t over-think it.

I converted a paintball gun into a laser shooter and made a game where you could fire lasers at images of monkeys and lentils. A computer would tell you would announce if you shot a monkey or a lentil. Another student made a small robot that pooped lentils when stroked. I loved the extreme constraints of this assignment. The selection of actions, things, and responses evoke whimsy and facilitate cognitive serendipity, or creating connections between seemingly different ideas.

All of these ideas: using prompts or challenges, addressing environmental concerns, starting with passions, choosing specific sites, and making connections through improvisations have something in common: they place constraints around the ideation process. Constraints help students deal with the anxiety caused by the Paradox of Choice that makerspaces can create. The protean nature of a makerspace is both a blessing and a curse. While opening doors for students to invent almost anything they want, it can be a bit overwhelming, like entering an ice cream shop with hundreds of flavors. How do you choose? Constraints can be a helpful guide for students as the come up with creative ideas like sundaes that they can feel ownership over.

Okay, your student has a great idea for a project. Now what? In the next installment of the Useful Strategies for Makers series, I will present some tips and advice for students and teachers that will be helpful as students begin to plan out their projects.