When the switch is closed, the circuit is complete, and electrons can flow from the anode to the cathode. These electrons enable the chemical reations at the anode and cathode.

In essence, we are separating a certain kind of chemical reaction, a reduction-oxidation reaction or redox reaction, into two separate parts. Redox reactions occur when electrons are transferred between chemicals. We can harness the movement of electrons in this reaction to flow outside the battery to power our circuit.

This first part of the redox reaction, oxidation, occurs between the anode and electrolyte, and it produces electrons (marked as e-).

Some oxidation reactions produce ions, such as in a lithium-ion battery. In other chemistries, the reaction consumes ions, like in the common alkaline battery. In either case, ions are able to flow freely through the electrolyte where electrons cannot.

The other half of the redox reaction, reduction, occurs in or near the cathode. Electrons produced by the oxidation reaction are consumed during reduction.

In most batteries, some or all of the chemical reactions can occur even when the battery is not connected to a circuit. These reactions can impact a battery's shelf life. 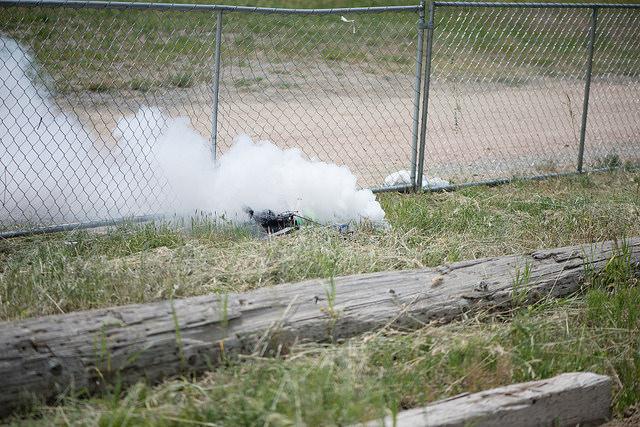 Creating a short circuit in a battery (even accidental ones, in this case), can be dangerous. Lithium-ion batteries are known to overheat and even smoke or catch fire in the presence of a short circuit.

We can pass these moving electrons through various electrical components, known as a "load," in order to accomplish something useful. In the motion graphic at the beginning of this section, we are lighting a virtual light bulb with our moving electrons.

Primary cells must be disposed when the battery is dead. Secondary cells can be recharged, and this is accomplished by applying a reverse electric current through the battery. Recharging occurs when the chemicals perform another series of reactions to take them back to their original state.