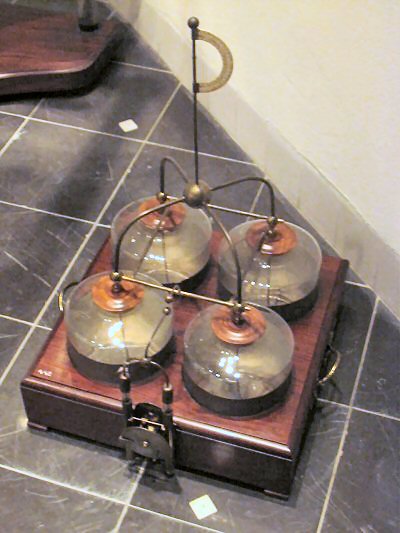 Invention of the Battery

One fateful day in 1780, Italian physicist, physician, biologist, and philosopher, Luigi Galvani, was dissecting a frog attached to a brass hook. As he touched the frog's leg with an iron scapel, the leg twitched. Galvani theorized that the energy came from the leg itself, but his fellow scientist, Alessandro Volta, believed otherwise.

Volta hypothesized that the frog's leg impulses were actually caused by different metals soaked in a liquid. He repeated the experiment using cloth soaked in brine instead of a frog corpse, which resulted in a similar voltage. Volta published his findings in 1791 and later created the first battery, the voltaic pile, in 1800. 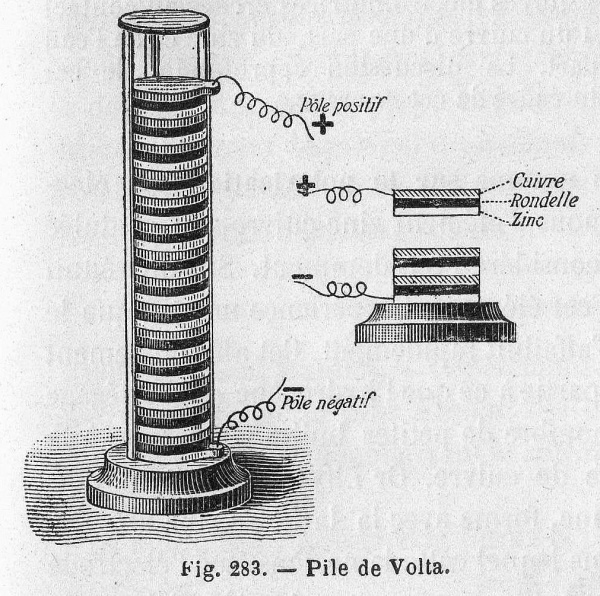 Volta's pile was plagued by two major issues: the weight of the stack caused the electrolyte to leak out of the cloth, and the particular chemical properties of the components resulted in a very short life span (about an hour). The next two hundred years would be spent perfecting Volta's design and solving these issues.

Fixes to the Voltaic Pile

William Cruickshank of Scotland solved the leakage problem by laying the voltaic pile on its side to form the "trough battery." 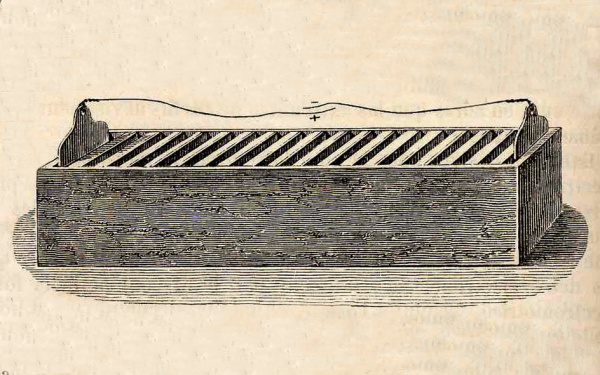 The trough battery solved the leakage problem of the voltaic pile

The second problem, short life span, was caused by the degradation of the zinc due to impurities and a build up of hydrogen bubbles on the copper. In 1835, William Sturgeon discovered that treating the zinc with mercury would prevent degradation.

The British chemist John Frederic Daniell used a second electrolyte that reacted with the hydrogen, preventing buildup on the copper cathode. Daniell's two-electrolyte battery, known as the "Daniell cell," would become a very popular solution to providing power to the budding telegraph networks. 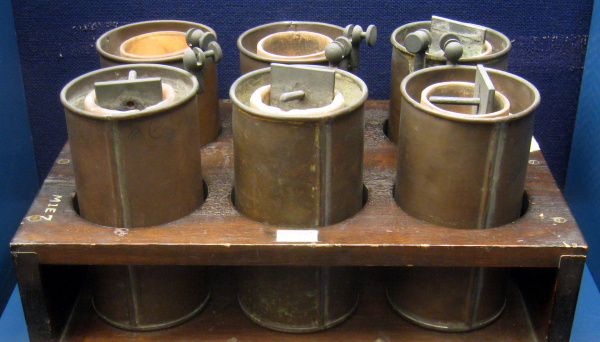 A collection of Daniell cells from 1836

In 1859, the French physicist Gaston Planté created a battery using two rolled sheets of lead submerged in sulfuric acid. By reversing the electrical current through the battery, the chemistry would return to its original state, thus creating the first rechargeable battery.

Later, in 1881, Camille Alphonse Faure improved Planté's design by forming the lead sheets into plates. This new design made the batteries easier to manufacture, and the lead acid battery saw wide-spread use in automobiles. 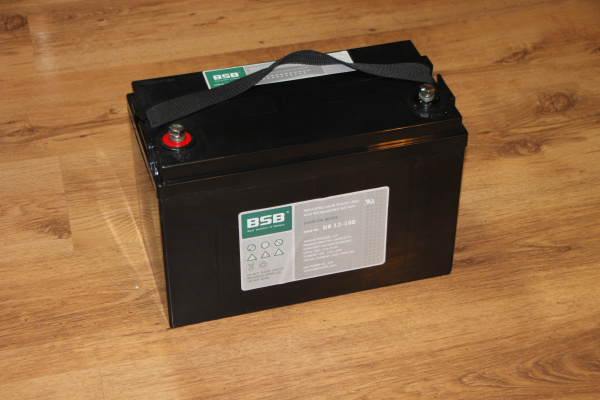 Up until the late 1800s, the electrolyte in batteries was in a liquid state. This made battery transportation a very careful endeavor, and most batteries were never intended to be moved once attached to the circuit.

In 1866, Georges Leclanché created a battery using a zinc anode, a manganese dioxide cathode, and an ammonium chloride solution for the electrolyte. While the electrolyte in the Leclanché cell was still a liquid, the battery's chemistry proved to be an important step for the invention of the dry cell.

Carl Gassner figured out how to create an electrolyte paste out of ammonium chloride and Plaster of Paris. He patented the new "dry cell" battery in 1886 in Germany.

These new dry cells, commonly called "zinc-carbon batteries," were massed produced and proved hugely popular until the late 1950s. While carbon is not used in the chemical reaction, it performs an important role as an electrical conductor in the zinc-carbon battery. 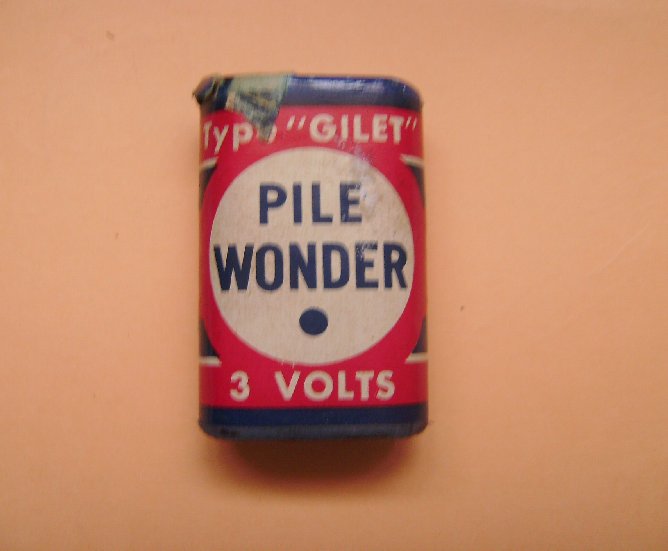 In the 1950s, Lewis Urry, Paul Marsal, and Karl Kordesch of the Union Carbide company (later known as "Eveready" and then "Energizer") replaced the ammonium chloride electrolyte with an alkaline substance, based on the battery chemistry formulated by Waldemar Jungner in 1899. Alkaline dry cell batteries could hold more energy than zinc carbon batteries of the same size and had a longer shelf life.

Alkaline batteries rose in popularity in the 1960s, overtook zinc-carbon batteries, and have since become the standard primary cell for consumer use. 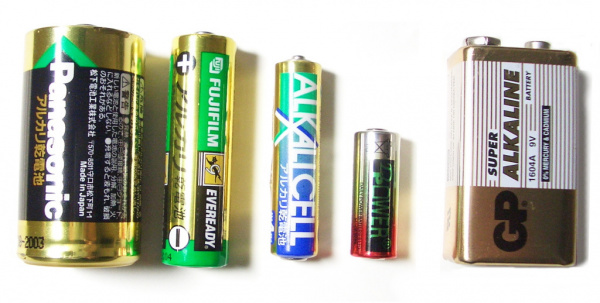 The research of several companies since the late 1960s resulted in the createion of the nickel-metal hydride (NiMH) battery. NiMH batteries were released to the consumer market in 1989, and provided a smaller, cheaper alternative to the rechargeable nickel-hydrogen cells. 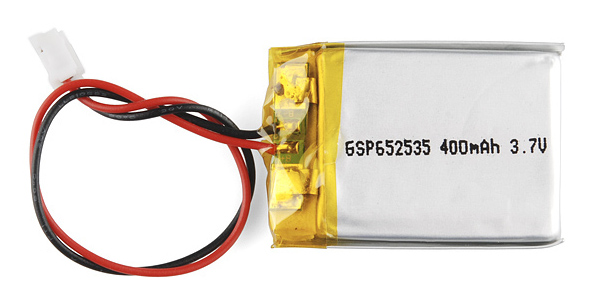 Obviously, many more battery chemistries have been invented, manufactured, and become obsolete. If you would like to read more about modern, popular battery technologies, check out our Battery Technologies tutorial.