NOTE: This guide is for the latest version of the WAV Trigger, V11. If You have an older version (the version number can be found on the back of the PCB), please refer to this tutorial.

The WAV Trigger is a development platform that allows you to easily add music and sound effects to your project. The WAV Trigger plays uncompressed WAV files up to 16-bit stereo 44.1kHz, the same quality as audio CD's. One significant feature is that the board has the ability to play multiple tracks at the same time, mixing up to 8 stereo tracks together on the fly. The board has a audio jack and a 2-pin output that can be connected to either headphones or speakers for audio output.

Tracks are played when some type of condition is met. For example, the most basic use is to connect a button between ground and a trigger. By default, when the button is pressed, the track (.WAV file) on the micro SD card to that corresponds to that trigger will be played. There are more advanced options that can be created with a configuration file that allows triggers to play random tracks, pause tracks, and change volume, amongst other operations. 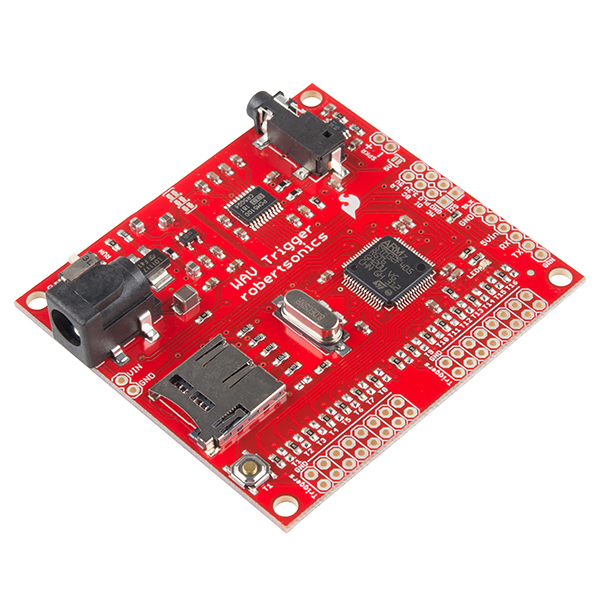 In addition to using buttons and switches, sounds can be triggered by the digital outputs of microcontrollers or sensors. This can allow for many interesting uses of this product that depend on environmental stimuli. There are various ways to configure your board, which we'll detail later in the tutorial.

We will also explain how to use the WAV Trigger's applications for configuration, flashing new firmware, or controlling the board remotely with a serial connection. Download these applications with the links below for either Windows or Mac.

The beauty of the WAV Trigger is that you can make it as simple or as complex as you want. However, to follow along with this tutorial you will need a few things besides just a WAV trigger board. At the very least you will need some wire to connect your triggers to ground and test them out. You may also want to grab some male and/or female headers, some buttons and switches, and a Micro SD card to store the files you want to trigger. For software debugging, configuration settings, and testing you'll need a USB mini-B cable and an FTDI Basic.

In addition to the hardware mentioned above, you'll need to download the WAV Trigger Applications to follow along.

This tutorial builds upon some other concepts. Check out any that you may be unfamiliar with before continuing.